We’ve avoided a top 10 of bombers until now as it seemed too ghoulish. Two things made it palatable: setting it in the past, and finding an actual bomber pilot to create it. Keith Shiban  flew the B-52 in the nuclear deterrent role, and in combat missions over Iraq. Over to Keith:

Any adverts you see on Hush-Kit are not from us, to stay impartial and to give you a better experience we avoid them. That means we can only carry on with donations, though we are currently well below our targets. If you enjoy the site and want to contribute then do please use the donate buttons. Many thanks to all who help. Cheers, HK.

What makes a good bomber?

Range is important. The primary job of a bomber is to go into enemy territory and “hit ‘em where it hurts”.

If it’s going to fly all that way it should be able to actually do something when it gets there, so weapons load is important.

It needs to be able to survive enemy defences at least long enough to do its mission. This can be through speed, stealth, countermeasures, defensive armament, or simply staying out of range (standoff capability). Most bombers use a combination of these.

Versatility is nice. It costs a lot of money to design a bomber so it’s useful if it can be adapted to more than one mission. For the same reason longevity is a good thing. After spending all that money it’s nice to get more than a few years use out of these planes.

Finally, because this is Hush Kit, I’ll throw in the “cool factor”.

Admittedly my list is biased. Your mileage may vary. Depending on how much weight you give each factor you can easily change the winners.

I had a tough time with number ten. There were  many contenders but none of them exemplary.

B-36: Expensive, dismally slow, prone to fires, only around for ten years.

Victor: Short career as a bomber, spent most of its life as a tanker.

Valiant: Short career as a bomber.

B-58: Killed a lot of people (all of them on our side), high-maintenance.

FB-111: High-maintenance. Never did much. Technically a fighter-bomber.

Myasishchev M-4: Never had enough range to do its primary mission.

After much indecision I decided to go with the B-47.

I went with the B-47 because it was such a ground-breaking aircraft when first introduced and it laid the groundwork for the B-52. While definitely flawed, it was the plane we needed in the early days of the Cold War.

The type proved fairly versatile, the reconnaissance and electronic warfare versions served well past its days as a bomber.

One thing I find odd is that the B-47 is one of the few USAF aircraft never to have a nickname, at least not one that I know of. 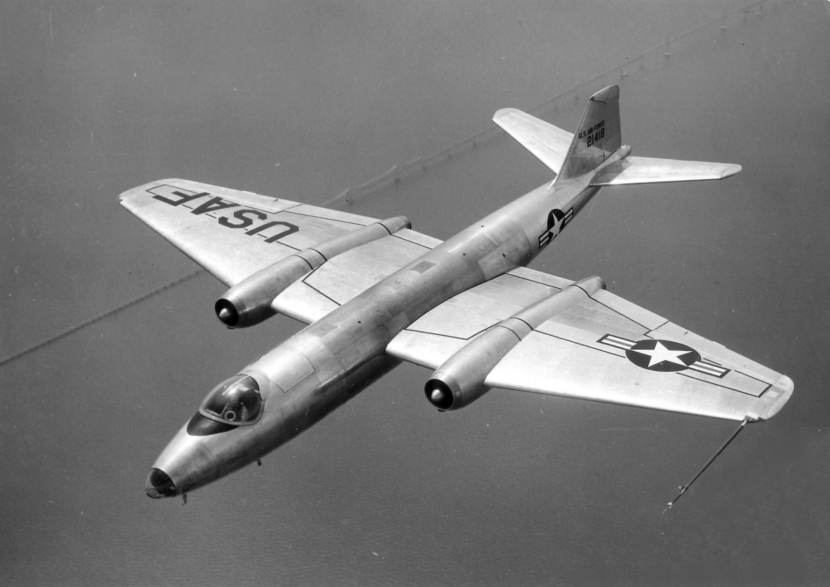 The Canberra might seem like an odd pick but it’s one of the more successful designs to come out of the Cold War. First introduced in 1951: it served 55 years with the RAF, was exported to several countries and was even produced in the US as the Martin B-57. While not particularly fast, it had an impressive service ceiling, exceeded only by the U-2.

Like the Tu-16, it’s just an honest, rugged design that proved highly adaptable.

Obviously these would be hopelessly obsolete today, but I give it a high rating for its day.

Cool factor: Engines in the wing. 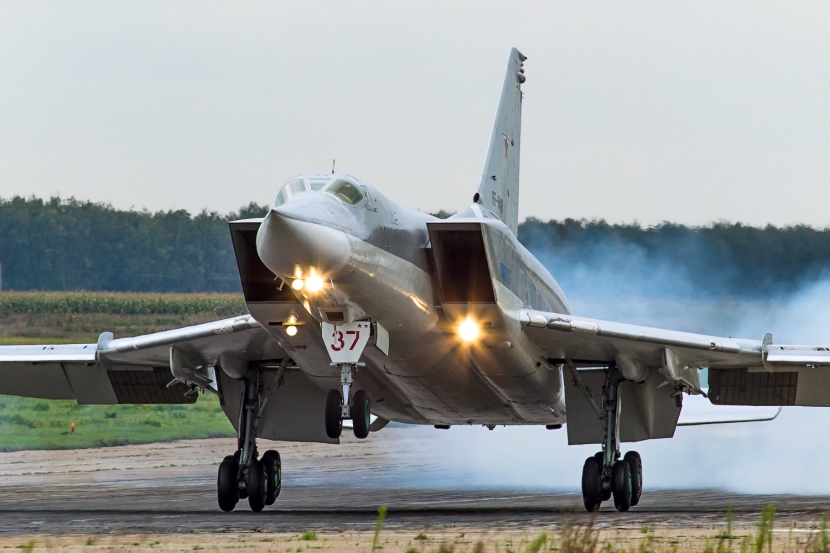 I realise there are four Tupolevs on this list, but that’s just how it shook out.

First introduced in 1972 to replace the woefully inadequate Tu-22, the Tu-22M is almost a completely different aircraft from its predecessor.

It’s an odd sized aircraft: smaller than a B-1 but a good bit larger than an FB-111. It makes sense when you realise it was primarily intended for use in the European Theater and as a naval weapon.

In a hypothetical US/Soviet conflict these would have gone against our carrier battle groups in an attempt to saturate the defences with missiles.

With roughly 150 still in service, it’s a mainstay of the Russian bomber force and has seen service in every conflict since Afghanistan.

They lost one of these, probably to an SA-11, in the recent Russia/Georgia conflict. If they’re anything like us, their countermeasures are probably not optimized to go against their own systems.

Only four countries actually fielded a jet bomber during the Cold War, which is why the French Mirage IV makes the list. Plus I just like the looks of it.

With a top speed of Mach 2.2 the Mirage IV is part of the very exclusive supersonic bomber club. With upgrades it managed an impressive 42 year run as a strategic bomber. The recce version lived on for another decade. 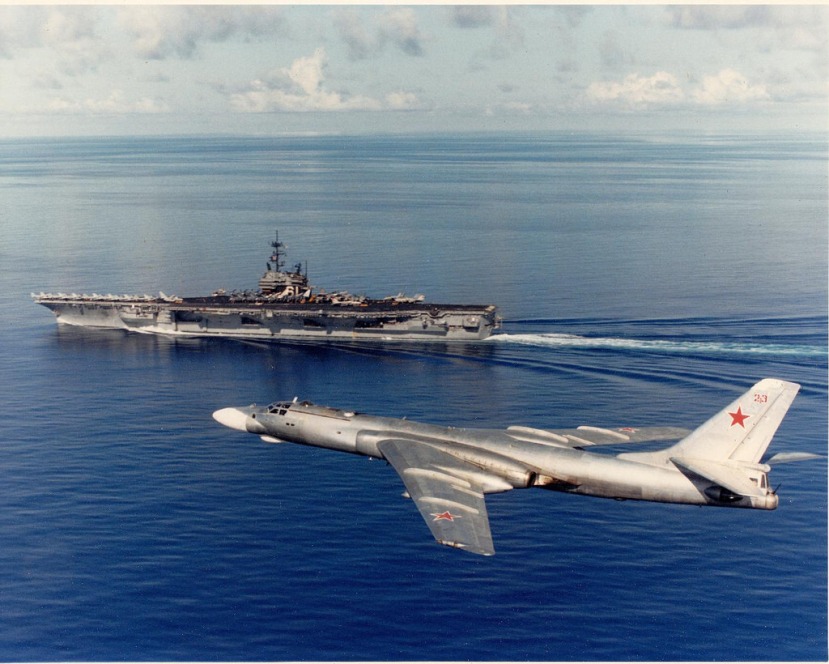 Here’s another Soviet blast from the past. The ‘Badger’ spent four decades in Russian service and the license-built H-6 is still the mainstay of the Chinese bomber force in 2016.

I think what’s special about the Tu-16/H-6 is that there’s nothing special about it. It’s just a solid, generic design that has been adapted to many roles over the years. Strategic bomber, missile carrier, naval aviation, electronic warfare, reconnaissance, there’s probably been a Tu-16 model for the job.

While the H-6 is nothing special it can carry a mix of twelve anti-ship missiles and land attack cruise missiles with a range of several hundred miles. This makes it a potential long-range threat to US naval forces in the region. Even an old bomber can still hurt you if it’s carrying good missiles.

Cool factor: Engines mounted in the wing roots. They don’t build ‘em that way any more (for good reason).

If I was going by looks alone, the iconic Vulcan would be my #1 or #2 pick. It’s one of those all-time great designs that manages to look both retro and futuristic at the same time.

The Vulcan has a great mix of speed, manoeuvrability plus a relatively small radar signature for its day. It didn’t have the range or payload of a B-52, but it didn’t have nearly as far to go to reach targets in Russia from its bases in England.

Plus we all cheered when they used these in the Falklands.

Seriously though, who’s bright idea was it to only give ejection seats to the pilots?

Cool factor: Just look at it!

The Tu-160 looks a lot like a B-1, but it was designed to primarily be a missile carrier rather than a low-level penetrator. It beats the B-1 on speed and range but the B-1 has the edge on payload. The Tu-160 carries a relatively small load-out of 12 long-range cruise missiles or 24 short-range missiles.

I don’t know how capable the electronic countermeasures are on this aircraft. I have to assume they’re at least as good as other Russian ECM systems and therefore pretty good.

Before you start having nightmares about this thing, keep in mind that they only have 16 of them in service.

It’s a tough call between the B-1 and the Tu-160. I give the B-1 the edge mostly because I’m more familiar with it. While controversial when introduced, the B-1 has proven its worth in recent conflicts.

Every USAF aircraft has an official name that nobody ever uses and then the name that everybody actually calls it. I have never heard a B-1 referred to as a ‘Lancer’. It’s either just a ‘B-1’ or ‘the Bone’ (B-One).

I’m told it’s a great flying aircraft with impressive speed at low altitude and fighter-like handling. Not only is it fast, it carries enough gas to go fast for a long time.

What makes the B-1 great is that it can carry a massive amount of ordnance, loiter for a very long time, and then dash to where it’s needed in a hurry. In our recent conflicts we like to have these on call for that reason.

The only drawback is that it’s a complicated aircraft with the associated high maintenance costs.

This blog can only carry on with donations, please hit the donation button and share what you can. Every donation helps us- thank you. Donations buttons can be spotted by the eagle-eyed on this page.

When the Russians build something that gets the job done, they stick with it. The TU-95 has been around almost as long as the B-52. Sure it’s propeller driven and so noisy that submarines can hear it, but the damn thing works. Continuous upgrades have kept the Bear relevant even today.

While turboprops may seem primitive, they’re very efficient engines. This pays off with impressive range and endurance without sacrificing that much in the way of speed.

The Tu-95 (or the B-52 for that matter) probably wouldn’t do well against modern air defences. That’s not the point of this aircraft, however. The Bear isn’t really the threat, it’s his skinny wingmen you need to worry about.

The Tu-95MS version can carry up to 16 advanced Kh-55 cruise missiles, meaning he can hit you from 1,300 miles away! He’s not really worried about your air defences because he doesn’t plan on getting that close.

Seriously folks, how could the B-52 not be my #1 pick? It’s tough to argue with 61 years of continuous operational service. These things were old when I flew them and that was 25 years ago!

I think what has kept the B-52 relevant is that it’s such a generic design. This has allowed it to adapt to new missions while more specialised aircraft have come and gone. High-level bomber, low-level penetrator, cruise-missile carrier, anti-shipping, close air support (yes really) the old BUFF just keeps on going.

The B-52 brings an impressive mix of range, payload and endurance to the fight. It will carry 50,000 pounds of whatever bombs or missiles you care to hang off it halfway around the world.

I wouldn’t expect it to go up against modern air defences, but that’s not how we’re using them these days.

Follow my vapour trail on Twitter: @Hush_kit
This blog can only carry on with donations, please hit the donation button and share what you can. Every donation helps us- thank you. Donations buttons can be spotted by the eagle-eyed on this page.

You may also enjoy A B-52 pilot’s guide to modern fighters, Flying and fighting in the Lightning: a pilot’s guide,Interview with a Super Hornet pilot, Trump’s Air Force Plan, 11 Worst Soviet Aircraft, 10 worst US aircraft,and 10 worst British aircraft