Every now and again, I get a pang of guilt for celebrating military aircraft and ignoring the world of commercial aviation. But as soon as I start reading about modern airliners I start remembering important tasks that need doing, like buying biros or cleaning my shoes. However, not all airliners are dull – the following would have been extremely beautiful, brutish or decadent- or in some cases all three.

Unfortunately they were all destined to be discarded in the overhead locker of history.

Keep us going. Keep us independent. This blog can only carry on with donations, please hit the donation button (above and below) and share what you can. Every donation helps us- thank you.

Choosing number 10 was particularly hard: one of the proposed Northrop flying-wings as seen in the picture above? Barnes Wallis’ supersonic swing-wing Swallow? The Ye-155 business jet variant based on the MiG-25? The Horten 70-ton transport? All would have been deserving aircraft but we could only have ten. I hope you enjoy our selection.

Drawing inspiration from the Dornier X, the ‘4 would have been a flying ocean liner- complete with a crew of 155 to serve the 451 passengers. Designed by Norman Bel Geddes and Otto Kröller, this swept flying-wing design would have offered lucky passengers viewing verandas, baths, private suites and a stylish bar. Sadly nobody was crazy, or forward-looking, enough to build this wonderful machine and it remained firmly on the drawing board.

Rarely discussed is the fact that from 1979-1993 Tupolev were working on a ‘super Concordski’, faster than Concorde and capable of carrying an additional 200 passengers. Building on experience with the Tu-144 and Tu-160, the Tu-244 would have been a remarkable aircraft to showcase the Soviet Union’s aeronautical prowess. Unfortunately for the project, the Soviet Union ceased to be from 1991, and Russia’s situation in the 1990s made the completion of the aircraft impossible. It was reported that it would have been powered by a hydrogen-powered variant of the engine that powered the Tu-160 and ‘144LL but this seems unlikely.

Streaking from city centre to city centre with a top speed twice that of helicopters of the time, the Rotodyne, could have been a major transport innovation. As the world’s first vertical take-off airliner it could have revolutionised air travel, removing the need for remote airports for everything but long haul journeys.

The concept was extremely innovative: for takeoff and landing, the rotor was driven by tip-mounted jet engines. The air for the tip-jets wasn’t bled from the engines. The engines were connected with clutches to axial compressors in the rear of the nacelles, which had flush inlets above the wing, and the compressors fed the rotor. The turboprop-powered propellers on the wings provided thrust for horizontal flight while the rotor autorotated (‘autorotation’ is when rotors turn around while unpowered, but in flight). Thanks to its tip-mounted jets, the Rotodyne was exceptionally noisy, an undesirable trait in a city centre airliner, and was cancelled. Debate still rages about the degree to which the Rotodyne’s noise levels could have been reduced. 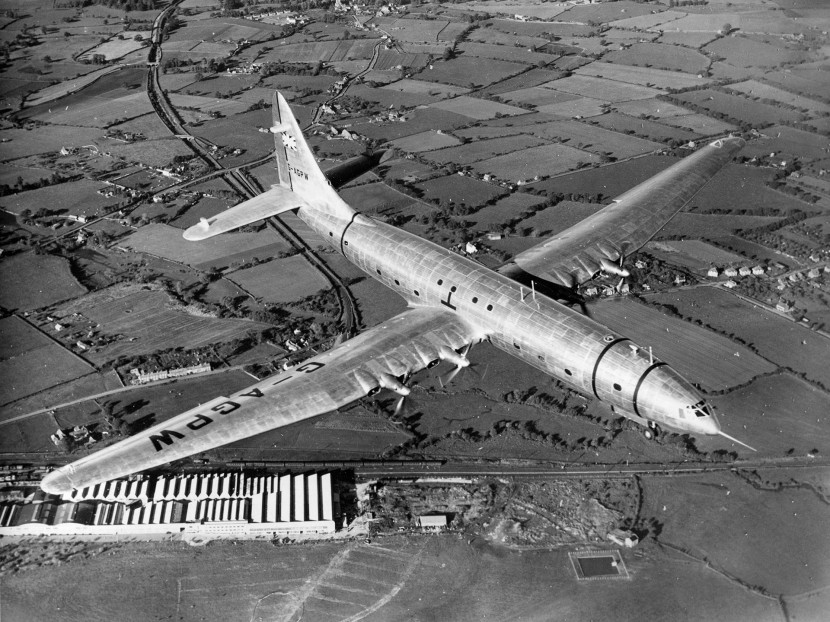 On 4 November 1909, John-Moore Brabazon put a small pig in a bin tied to a wing-strut of his aeroplane, to prove that pigs could fly. He later headed the wartime Brabazon Committee, an effort to ensure Britain had a strong start in the postwar airliner industry. Though well-meaning, not all of the predictions of the committee would prove accurate. It imagined that transatlantic flights would largely be for exceptionally wealthy people requiring a (very) comfortable journey. The Brabazon would have made today’s A380-business class passengers green with envy: each passenger in luxury class would have had 270 ft³ (8 m³) of room, and access to a sleeping berth, a dining room, a 37-seat cinema, a promenade and a bar. This titan was to have a wingspan greater than that of the biggest 747 and was ten metres longer than a B-1B bomber. One demolished village later (levelled to make room for the runway) the vast Brabazon flew in 1949. It was a brilliant piece of engineering, with superb handling and an exceptionally smooth ride- however, an aircraft of this size would have to wait for the arrival of the high bypass turbofan engine (rather than eight radial engines driving four sets of contra-rotating propellers) to make economical sense.

I’m not sure a biz-jet counts as an airliner, but there’s no way I’m ignoring this one.

If you want to make an impression, travel to business meetings in a supersonic swing-wing converted soviet bomber – and make the owners of Gulfstreams look like a bunch of total arseholes. Hard to think of a way to burn more fuel for only 8-12 passengers, but this isn’t about being sensible. 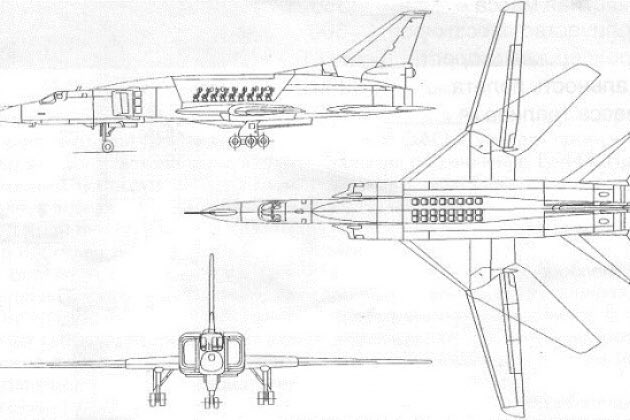 Based as it was on the Tu-22M, it’s hard to imagine that the ‘334 would have offered similar ride quality and cabin noise levels to a Dassault Falcon, but who gives a shit- this aircraft would have been incredible.

Imagine an airline that put the magic realist writer Italo Calvino in charge of procurement and you can be sure they would have had a large fleet of Princesses. The aircraft was vast, gorgeous and could land on water. The Princess was much more advanced than the Brabazon: the entire flight control system was electro-hydraulic, with the power units inside the pressure hull, and it had integral fuel tanks. Sadly by 1952 (when it first flew) the days of flying boats were over. With innovative rocket fighters, jet-powered seaplane fighters and giant flying boats, Saunder-Roe’s remarkable designs were out of step with the rest of the world. The Princess was the last true aircraft they built, though they did make some hovercraft.

In many ways, the XF-12 Rainbow was the most advanced piston-engined aircraft ever built, and it was also one the most beautiful. Disobeying comedians’ rule of threes- the Rainbow  ‘flew on all fours’: four engines, 400 mph cruise, 4,000 mile range, at 40,000 feet. It was the only four-engined piston-engined aircraft to achieve 450mph. Intended to serve in the high altitude reconnaissance role, Republic also envisioned an airliner variant. The RC-2, as it became known, would have been five feet longer than the spyplane and would have carried 46 passengers in style and comfort. But the radial-engined Rainbow first flew in ’46, in a world about to turn to turboprops and jet engines for high performance aircraft. USAF refused to buy the Rainbow, deciding instead to use the plentiful B-29s and ‘50s until the new generation jet B-47 entered service. Without military backing, the project died.

As the Soviet Union chaotically disintegrated in 1991, designers at Tupolev escaped into happy fantasies of incredibly advanced concepts. The Tu-404 studies for an ultra-large long-range airliner included a flying-wing powered by six giant turboprops capable of carrying 1214 passengers over 13,000 kms. Tupolev remains interested in unconventional designs lacking a traditional tubular fuselage, as can be seen by the illustrations of the proposed PAK DA bomber, which may or may not enter service in the 2020s. 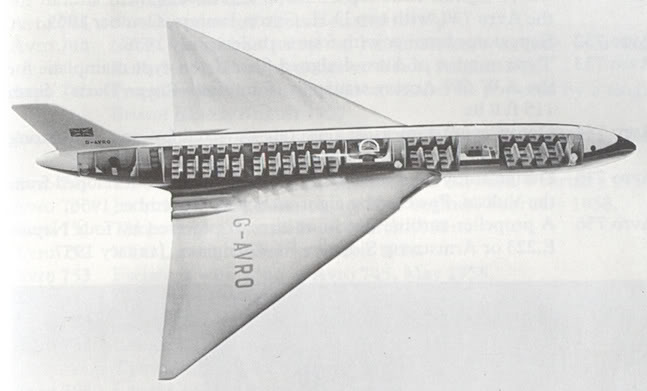 There’s nothing that warms the cockles of a British aviation enthusiast more than the Avro Vulcan. Sure, it was designed to indiscriminately vaporise millions of Soviet civilians, but what a great noise! Exceptionally advanced for its time, it’s perhaps not surprising to learn that an airliner variant was proposed.

The 1952 Avro Atlantic would have taken around 100 passengers over the Atlantic at Mach 0.9 (a smidgeon faster than modern airliners).The airliner lost out to a rival bid from Vickers, the V-1000. Delta wings for subsonic airliners would prove a non-starter. 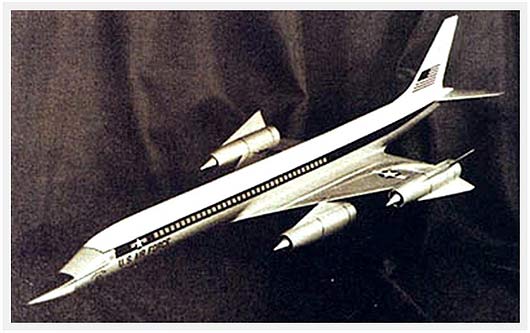 The Convair B-58 Hustler was the first operational bomber capable of Mach 2, so why not create an enlarged version (hypothetically) suitable for taking 52 brave passengers on holiday at Mach 2.4? General Dynamics promised they would be able to get a prototype into the air within three years of an order being placed- because everyone wants such an ambitious project to be rushed. An even more alarming idea can be seen below, this is a five person external pod- an ‘intermediate’ step toward the final supersonic airliner, and presumably toward five heart attacks.

Follow my vapour trail on Twitter: @Hush_kit
We need you to keep Hush-Kit going! This blog can only carry on with donations, please hit the donation button and share what you can. Every donation helps us- thank you. Donations buttons can be spotted by the eagle-eyed on this page.

You may also enjoy B-52 pilot chooses Top 10 Cold War bombers, Flying & Fighting in the Mirage 2000: a pilot interview, The World’s Worst Air Force, 10 most formidable dogfight missiles, The ten coolest cancelled airliners, Ten incredible cancelled Soviet fighter aircraft, Ten worst Soviet aircraft, Ten incredible cancelled military aircraft, Fighter aircraft news round-up,  11 Cancelled French aircraft or the 10 worst British military aircraft, Su-35 versusTyphoon, 10 Best fighters of World War II , Su-35 versus Typhoon, top WVR and BVR fighters of today, an interview with a Super Hornet pilot and a Pacifist’s Guide to Warplanes. Flying and fighting in the Tornado. Was the Spitfire overrated? Want something more bizarre? Try Sigmund Freud’s Guide to Spyplanes. The Top Ten fictional aircraft is a fascinating read, as is The Strange Story and The Planet Satellite. The Fashion Versus Aircraft Camo is also a real cracker. Those interested in the Cold Way should read A pilot’s guide to flying and fighting in the Lightning. Those feeling less belligerent may enjoy A pilot’s farewell to the Airbus A340. Looking for something more humorous? Have a look at this F-35 satire and ‘Werner Herzog’s Guide to pusher bi-planes or the Ten most boring aircraft. In the mood for something more offensive? Try the NSFW 10 best looking American airplanes, or the same but for Canadians. 10 great aircraft stymied by the US.

The 70-ton Horten just missed inclusion on this list.