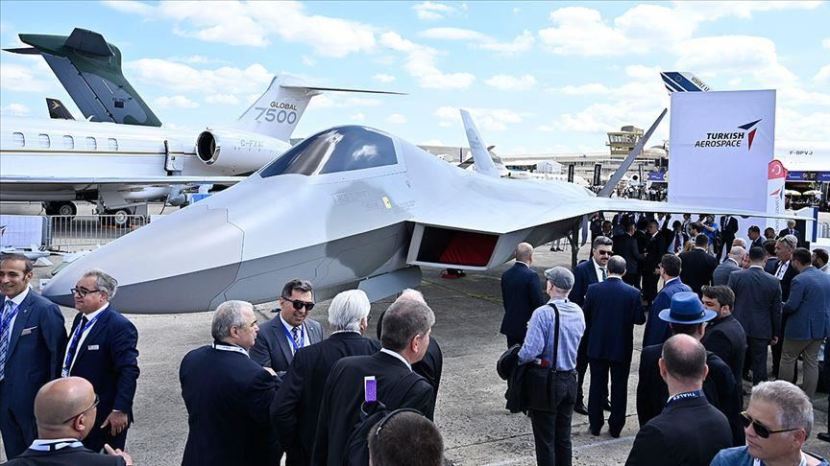 At the Paris Air Show, Turkish Aerospace displayed a model of the TF–X fighter. Turkey has never designed an advanced combat aircraft before, and the aircraft is symbolic of the nation’s new confidence in breaking its dependence on the US. Looking every inch a Lockheed Martin model, could the TF-X become the air superiority ‘F-35’ that Turkey, and other air forces, are crying out for?

The TF-X is at first sight a twin-engine F-35 look-alike. Turkey projects this aircraft as a replacement for the F-16, and might operate it alongside the F-35, although this currently looks a bit uncertain for Turkey due to the deterioration in its relationship with the Trump administration. Either Turkey is seeking a more agile, air-to-air aircraft to complement F-35, which might then be used mainly for air strike, or perhaps TF-X can be seen as a move to develop both Turkey’s Industrial capability and its Defence self-sufficiency.

I would expect the aircraft to focus on the Air Defence role, because this would provide an opportunity to supplement rather than simply duplicate F-35 capability. A secondary strike role for the aircraft is likely.

The TF-X has been the subject of a technical agreement with BAE Systems, and initially, two EJ200 engines were to be used. However, the technical dialogue with Rolls-Royce has apparently been broken off. The configuration recently shown at the Paris AirShow is unchanged from previous illustrations. Claimed characteristics include 2 x20,000 lb thrust engines, Max Take-Off Weight (MTOW) of 60,000 lb +, Max speed of Mach 2 and a ceiling of 55,000 ft+.

Broadly, then, Turkey appears to be, seeking to build a stealthy Typhoon. Is this achievable? I think it is doubtful that Turkey could achieve such an outcome without significant design and manufacturing assistance.

From a configuration viewpoint, the quoted Maximum Take-Off Weight (MTOW) appears pretty high. It is about 10,000lb greater than the max overload Take-Off Weigh of the comprehensively equipped Typhoon. The claimed Mach 2 maximum speed and ceiling of 55,000 ft match those of Typhoon, but the MTOW seems high. I cannot comment with confidence onTurkey’s ability to design and build such an aircraft, and make it stealthy as well, but it does seem questionable.

Top fighters of the 2030s here

Otherwise, if the aircraft is to accommodate fuel and weapons internally, it is likely that wave drag will become an issue, although the additional internal fuel may increase combat persistence.. Similarly, the simple intakes shown lack the variable area and boundary layer management of the Typhoon to reduce signature. From these aspects, I would suggest that Mach 2.0 is an optimistic figure.

All-in-all, the TF-X is much more like a twin-engined F-35 than a Typhoon. I doubt speeds greater than M 1.8 are achievable. From a manoeuvre perspective, I’d expect reasonable manoeuvrability in an air combat configuration, but I would be concerned that the relatively tall fins might be subject to significant buffet loads at high incidence.

Could Turkey deliver the TF-X as an F-35-clone, but optimised for air defence? It’s a nice concept, but a huge step forward from their current Industrial capability.

Jim Smith had significant technical roles in the development of the UK’s leading military aviation programmes from ASRAAM and Nimrod, to the JSF and Eurofighter Typhoon.

We are currently well behind our donations target. This site can only survive with your donations. Click here to keep this site going.