A few short years ago, it seemed as if the future of the European fighter industry had been all but quashed by the US — today is a different story. As the Eurocanards continue to generate orders, Europe looks ahead to the creation of a multi-role stealthy combat aircraft to serve from the 2030s. The  Next Generation Fighter is an ambitious project led by Dassault of France and Airbus Defence, two organisations with a wealth of experience. Jim Smith reports.

The sleek mock-up revealed this week at the Paris Air Show demonstrated a confidence fortified by the signing of an accord by the defence ministers of Germany, France and Spain. But what does the mock-up reveal?

“Airbus Defence and Space of Germany, and Dassault of France, have agreed to cooperate on the Next Generation Fighter, the manned air combat element of the Future Combat Air System (FCAS) project to develop a future European air combat capability. France and Germany have been joined in this effort by Spain, and a mock-up of the proposed aircraft has been shown at the Paris Air Show.

It is expected that the aircraft will be multi-role, with both air combat and strike capabilities. The platform will be stealthy, and is envisaged as operating as part of a networked system-of-systems, in conjunction with other manned and unmanned capabilities, which together will form the FCAS.

The mock-up shown at Paris is perhaps 15m long, and features a wing with a planform resembling a delta wing, but with swept outer panels. A feature drawing significant comment is the broad butterfly tail, resembling that of the Northrop YF-23, but with even greater cant angle from the vertical (earlier artworks showed a tailless configuration).

To me, the configuration suggests significant trades have been made with an intent to minimise signature, at least in the forward and side-on aspects. The profile from the side is very low and flat, with the highly canted fins clearly intended to reduce signature in side-on aspects. I assume internal carriage of fuel and weapons, and bays intended for both air-to-air and air-to-ground weapons. The intakes are simple, and would probably limit the aircraft to about Mach 1.6.

The cranked wing configuration assists in providing internal volume for fuel and weapons, possibly at the expense of rear aspect signature. Such a planform would also ease the development of a naval variant, allowing lower approach speeds and/or a reduced nose-up attitude on the approach than a delta wing.

The platform does not seem to be designed with high manoeuvrability in mind, and looks to be likely to rely on its low signature, weapons system, and cooperative systems, rather than manoeuvrability or dash speed to survive in air combat.

Although, in a configuration sense, plausible, the mock-up shown at Paris somehow lacks the credibility of a fully developed design. It’s a little difficult to put one’s finger on why this should be the case, but the apparent lack of sensors, undercarriage, access panels, cockpit transparency, joint and panel lines with common angles to aid in managing signature, all contribute to this impression.”

The desired schedule demands a first flight of a demonstrator in 2025 and service entry in around 2040. Our full article on future fighters can be found here.

We are currently well behind our donations target. This site can only survive with your donations. Click here to keep this site going. 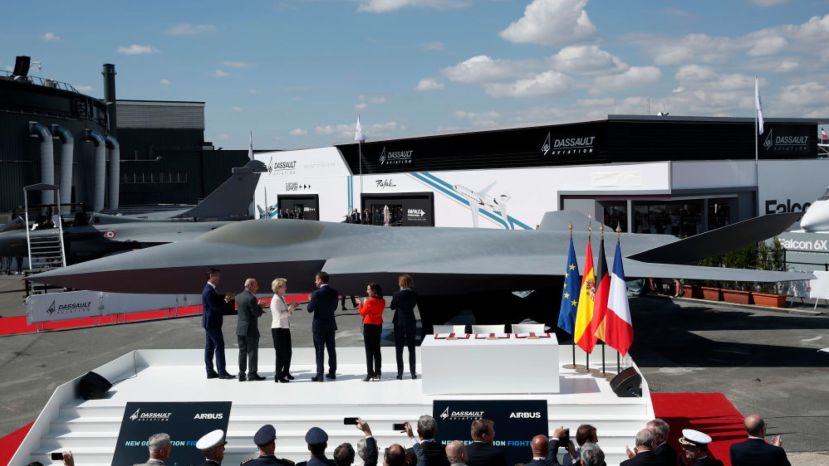 Yesterday, at the Paris Air Show, the defence ministers of France, Germany and Spain signed an accord launching a trilateral framework.