RAF Wing Commander Scott Williams is currently flying the F-35B Lightning II, the world’s most advanced fighter, with the US Marine Corps. We interviewed him to find out more about what is also the world’s most controversial aircraft.

What were your first impressions of the F-35B? Technologically mind-blowing and a true engineering marvel.  As a pilot it flies extremely smoothly and the handling is exceptional, especially when converting flight regimes to slow speed or jet-borne modes; that transition is almost imperceptibly smooth with no adverse characteristics.  High angle-of-attack manoeuvring is very easy and forgiving, with excellent nose and flight control ‘authority’ throughout.  Power is very apparent with impressive acceleration in dry power on take-off.

Which three words would you use to describe the F-35B?  Lethal; Game-changing (I consider that one word!); Growth.

“‘…fighting the F-35 is like going into a boxing match and your opponent doesn’t even know you’re in the ring yet!’”

What are the greatest myths about the F-35B? That it isn’t operational; that stealth doesn’t ‘work’; that external stores on F-35 defeats the point of its design.

What are the best and worst things about the aircraft? The best thing is how quickly and effectively the F-35 allows the pilot to make decisions – fusing sensor and other data from onboard and off-board sources to display what’s out there and what’s going on.  Worst thing? I’d like a bit more fuel but what pilot doesn’t?!

Thank you for reading Hush-Kit. This site is in peril as it is well below its funding targets. If you’ve enjoyed an article you can donate here. A huge thank you if you have already donated and apologies for interrupting your read.

Though the aircraft is not designed primarily as a WVR ‘dogfighting’ platform -and this may not be a desirable way to fight- how would it do in this respect? Pretty darn well, but there are so many factors that determine the outcome of a WVR fight; pilot proficiency, situational awareness, missile capabilities, countermeasures…every one of these things make a difference but if one were to postulate that in 1000 BVR engagements only a few would likely end up in a WVR fight, you need to ask yourself where you should invest the money, proportionally.  Designing a lightweight dogfighter was arguably relevant in the 1970s as fly-by-wire tech gave birth to increasing (super)manoeuvrability; today it isn’t anywhere near as important but still cool for air shows.

Can the aircraft currently work communicate well with Typhoons, what are the considerations in working together? I won’t talk about what we do with Typhoon but the communications have been tested on trials and they work.  I’d say a generic consideration for working latest generation fighters with legacy platforms is ensuring you understand their capabilities and limitations.

What is your most memorable mission in the F-35B? There are a few, but the one that stands out for me has to be my first STOVL flight.  Comparing the aircraft to the Harrier first-hand was a unique privilege and genuinely brought a smile to my face. I think the UK and US teams who developed the STOVL Control Laws (CLAW), and the pioneering research from the VAAC Harrier and test pilots, were responsible for a huge triumph. Boscombe Down, take a bow!

What’s the best thing about the sensors? How they interact and complement each other with sensor fusion.  For 15 years I’ve flown aircraft that need a targeting pod strapped on – these things were normally only bought in limited numbers so you’d get to use them on specific events.  Having a targeting pod on every single F35 (the EOTS – Electro-Optical Targeting System) is hugely beneficial for training in all missions.

How good is the situational awareness compared to other aircraft you have flown and how does that change things? Nothing compares to it.  Nothing.  And information  changes everything.  When you look at Boyd’s well-known OODA loop, traditionally the hardest things are to answer ‘what’s out there’, ‘what’s it doing’, ‘what do I need to do’.  That decision loop can cause paralysis which can lead to a quick demise in a combat fight.  F-35 helps enormously in this regard and allows the pilot to act rather than react – reacting is what we’ll make the enemy do. Constantly.

What would you change about the F-35B? Across all three variants the B does has the least fuel, but I believe it makes up for that with the ability to operate from the QE Carriers, bases with much shorter runways (~3000ft, predominantly for a re-supply tactical AT platform), or even other nations’ carriers when required.

How does its reliability and ease of maintenance compare with other aircraft you’ve flown? Most of the previously reported reliability issues have been software-related in my experience.  Maintenance is logical and designed to be as straightforward as possible but the still maturing F-35 global sustainment enterprise results in delays in supplying spares to a high number of demanding customers and countries.  With 8.6+ million lines of software code, this aircraft is many times more complex in how it operates compared to a Typhoon (or even an F-22 Raptor) but the latest software and hardware combinations in Block 3F have resulted in improved reliability for sure!

Will a F-35B  fly the close support mission in a different way to a GR4 or Typhoon?  F-35 will be able to fly the mission in a much more hostile and contested airspace than a GR4 and Typhoon by virtue of its low observable capabilities. However, the rudiments of how a pilot conducts CAS do not necessarily change that much but differences in platform sensor capabilities are an example.  It’s well documented that F-35 does not currently have a CCD capability in the EOTS so we’re restricted to infra-red only.  That’s something I’d like to see improved soon in impending upgrades and it’s ‘in the plan’ so to speak.  Expanded weapons integration in future will also open the variety of effects that we can give the ground commander too.

Do you like the helmet system?  The HMD is a truly incredible piece of kit because it really does bring a further dimension to the situational awareness for the pilot.  If you then consider the built-in Night Vision Camera and ability to project full-coverage IR imagery of the outside world no matter where you point your head, the ability to point or cue a weapon quickly by day or by night is a great capability.

What should I have asked you? What’s it like working closely with the US Marines!  It’s awesome – those guys and girls work like Trojans to achieve the mission and we have a close relationship building for cooperation in future.

How would you rate its BVR capabilities?  Second to none really.  First to see is first to shoot, is first to kill.  I recently heard a comment from someone that ‘…fighting the F-35 is like going into a boxing match and your opponent doesn’t even know you’re in the ring yet!’  I like that comment because our lethality is enhanced by being able to deliver the killer or knock-out blow to our opponents before they get enough awareness on what’s going on to prepare or do something about it.

How would you rate its ground attack and recce abilities compared to the GR4 or Typhoon? We only have Paveway IV currently, however this will expand with SPEAR 3 and other weapons in future but the single weapon option is a bit of a limitation of sorts right now, even though PWIV is an excellent weapon that’s proven itself against our enemies time and again.  There is also potential for UK to procure the GAU-22/A Gun Pod if needs be and the USMC have already employed it.  The variety of recce options on F-35 are good – from EOTS (IR) to DAS, to Radar Mapping, we have a true all-weather and, in many cases, multi-spectral recce capability.  However, F-35 isn’t a dedicated “recce” platform so you can perhaps understand why there’s no pod like the RAPTor on Tornado as an example.

Interview with a MiG-25 pilot here

Tell me something I don’t know about the F-35B. “I could tell you but I’d have to kill you”…

What is your rank and with which air arm do you serve?  Wing Commander, Royal Air Force

What is your unit? Currently VMFAT-501 (USMC F-35B Fleet Replacement Squadron or FRS).  However, this year all of my Royal Navy and Royal Air Force Instructor Pilots (IPs), Engineers and Mission Support staff will form the nucleus of 207 Squadron at RAF Marham on 1 July 2019, and we will also fly our aircraft back to the UK later that month.

Which types have you flown?  Harrier GR7/GR9; Tornado GR4 (post-SDSR10, after Harrier was retired early) and I now fly the F-35B Lightning and instruct both US Marine and UK students on VMFAT-501.

Interview with a B-52 pilot here

Why was 207 Sqn chosen for the F-35B?  Will the RAF and RN share F-35s? The choice was intentional — and was made due to the fact that 207 originated as 7 (Naval) Squadron, RNAS, in 1916.  When the independent RAF was born on 1 April 1918 and subsumed RNAS and RFC squadrons, 7(N) re-badged to become 207 Sqn.  So the number plate was purposefully chosen to have both Naval and Air Force lineage.  We don’t ‘share’ the F-35B Lightning like one might share a car with a friend or partner.  Instead the Lightning Force – and by that I specifically mean the aircraft, its personnel, equipment and support infrastructure – is all jointly-manned by serving Royal Navy and RAF personnel, including our vital civilian and reservist staff who make up what we call the ‘Whole Force’. 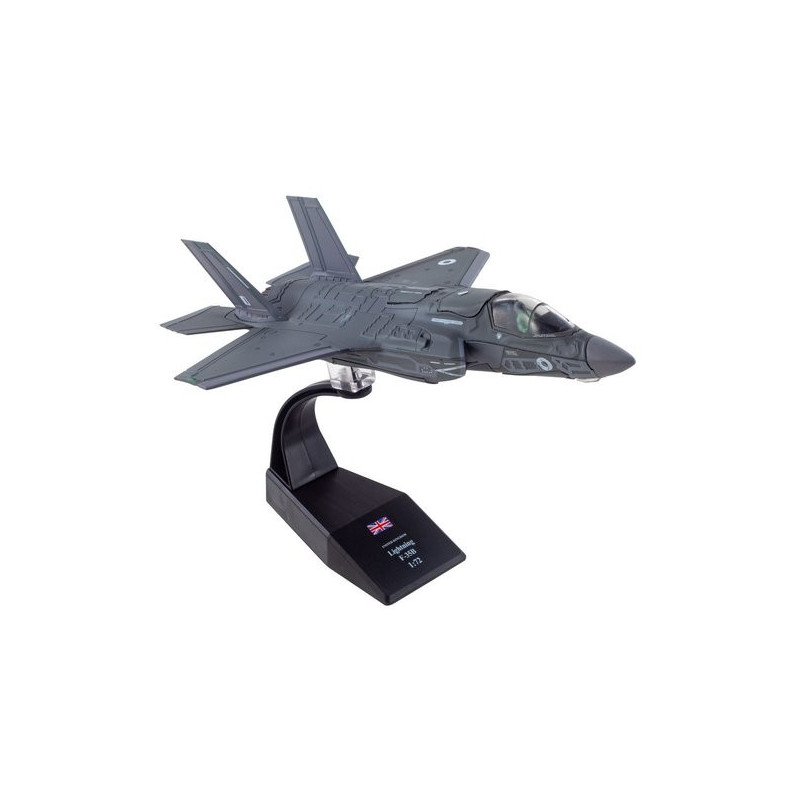 Have a look at this fab model here

Thank you for reading Hush-Kit. This site is in peril as it is well below its funding targets. If you’ve enjoyed an article you can donate here. A huge thank to those who have already donated — and apologies for pestering you again.