As well as being a razor, mach 3 is a speed. It’s very fast. Flying at mach 3 produces oven-like skin temperatures and requires aircraft with exotic propulsion systems, and structures wrought from unusual metals that refuse to behave as well as aluminium. Despite these seemingly insurmountable challenges, several mach 3 fighters have been considered. Some have even flown.

To keep this blog going – we need donations. We’re trying to do something different with Hush-Kit: give aviation fans something that is both entertaining, surprising and well-informed. Please do help us and click on the donate button above – you can really make a difference (suggested donation £10). You will keep us impartial and without advertisers – and allow us to carry on being naughty. The donate buttons are on this page. Many thanks.

The Russian MiG bureau has barely kept its head above water over the last 25 years, but according to some reports it is quietly working on a mach 4+ interceptor to replace the MiG-31, dubbed the ‘MiG-41’. You never know what to believe when it comes to Russian military aircraft, though it seems doubtful that Russia could afford such a programme if it couldn’t even fund the PAK FA by itself (it required reluctant Indian investment). If it is ever made, it will require a revolutionary form of propulsion – perhaps a modern variable-cycle interpretation of the J58 that powered the SR-71?

For thirty years the French solution to anything was the Mirage. VTOL fighter? Try a Mirage. Swing-wing fighter? Try a Mirage. Nuclear medium bomber? Same again. So it’s perhaps no surprise to learn that several mach 3 Mirage concepts were studied. Butch intakes, new transparencies and huge engines would have given the MD 750 a formidable appearance. Generally the French air force prefers lighter fighters, and like many heavyweight Dassault concepts this failed to get funding.

Of the slew of unflown mach 3 interceptor designs considered by the USAF in the 1950s, the North American XF-108 Rapier got the closest to being fully developed. If it had entered service it would have been exceptionally advanced: it was intended to carry the Hughes AN/ASG-18 radar, the first pulse-Doppler fighter radar set with a look-down/shoot-down capability (something that didn’t become common until the 1980s). It was also to be equipped with an infra-red search and tracking (IRST) system, and Hughes GAR-9 (missiles capable of destroying bombers over 100 miles away). Powered by two of the same engines as the equally ambitious XB-70 Valkyrie (and equipped with the same escape system), the F-108 would have been impressive but insanely expensive – in 1959 dollars the project would have cost four billion! The project was scrapped, which though a sane act, did deprive the world of what would have been the epitome of a kick-ass fighter. Its unfortunate name was temporarily carried by the F-22.

In the 1970s, the Israeli air force wanted a reconnaissance aircraft capable of carrying the extremely impressive HIAC-1 camera. The F-4 was considered, but the G-139 pod that contained the sensor was over 22 feet long and weighed over 4000 pounds – and the Phantom did not have the power to carry such a bulky store and remain fast and agile enough to survive in hostile airspace. One solution was to increase the power of the engines with water injection, something that had been done for various successful F-4 record attempts. This combined with new inlets, a new canopy and huge bolt-on water tanks promised a mouth-watering 150% increase in power. This would have allowed a startling top speed of mach 3.2 and a cruising speed of mach 2.7. This level of performance would have made the F-4X almost impossible to shoot-down with the technology then in service. The F-4X would also have been a formidable interceptor – something that threatened the F-15 development effort, causing the State Department to revoke an export licence for the RF-4X. Even with the increase in power, the Israeli air force was still worried about the huge amount of drag, but a solution came in the form of a slimmed-down camera installation in a specially elongated nose. This meant the interceptor radar had to be removed, which assuaged the State Department’s fears and the project was allowed to continue. However worries from the F-15 project community returned (as did worries about how safe the F-4X would have been to fly) and the US pulled out. Israel tried to go it alone but didn’t have enough money, so the mach 3 Phantom never flew. 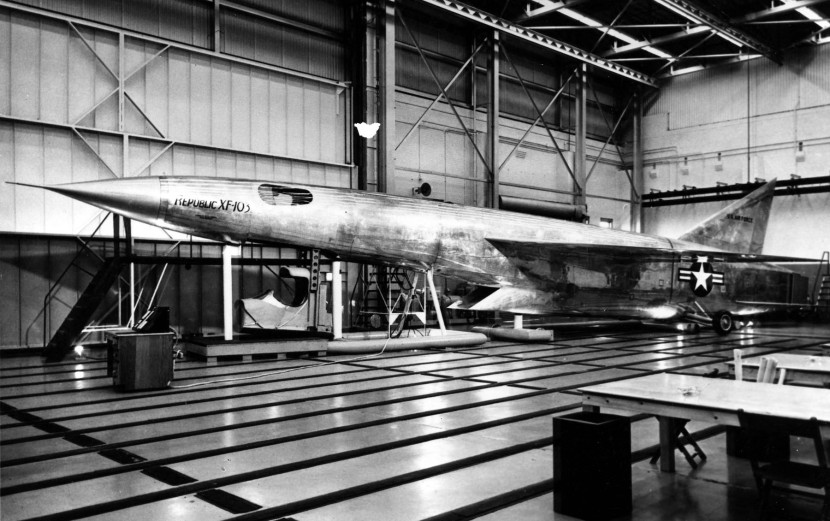 In 1949, the USAF issued the Weapon System WS-201A request for an advanced supersonic interceptor, which became better known as the ‘1954 interceptor’. The brief was demanding — perhaps too demanding. It called for an extremely fast all-weather interceptor with a sophisticated radar and air-to-air missile armament. A mach 3 top speed was sought, which would be over three times faster than the fastest contemporary fighter. One of the main stumbling blocks to achieving mach 3 was the fact that jet engines of the time simply weren’t up to the task. Enter Alexander Kartveli. Born Alexander Kartvelishvili in Tbilisi, Georgia, he was a hugely important designer, who worked on the potent P-47 Thunderbolt, the beautiful and impressive Republic XF-12 Rainbow, and the slightly shabby Gloster Javelin. To solve the propulsion problem he proposed using a Wright J67 turbojet (essentially a Bristol Olympus) supplemented by a RJ55-W-1 ramjet. Though the project was eventually cancelled in 1957 without ever flying, the design did inform the Republic RF-84F Thunderstreak and later F-105 Thunderchief (notably in the intake configuration) 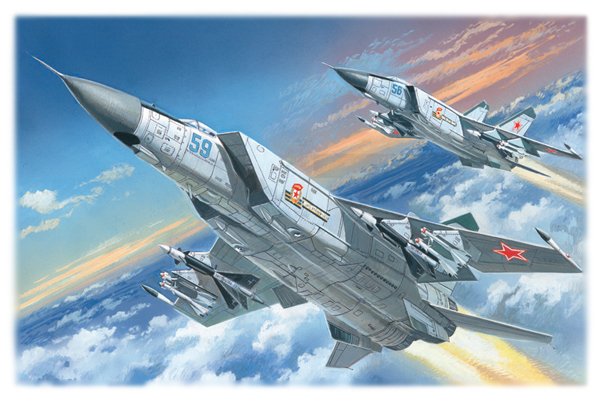 Yes, yes – I can hear all you dorks shouting ‘the MiG-25 is limited to mach 2.83, and as low as 2.5 operationally’. But it can go mach 3. Famously an Egyptian one (admittedly the recce version) legged it across Israeli airspace at a whopping 3.2, ruining the engines according to legend. The MiG-25 was the only mach 3 capable fighter (yes, yes—fighter interceptor if you’re going to be a dick about it) to enter service. At speeds above mach 2.5 aluminium is not much good so an alternative was needed. Mikoyan adopted a radically different solution to Lockheed’s: instead of using titanium as the primary material (which was difficult to work with, expensive and mostly being shipped to the US) the MiG-25 used 80% nickel-steel alloy, 11% aluminium, and only 9% titanium. I seem to remember it also contains 5kg of gold. The British had experimented with steel for their utterly crap Bristol 188.

Despite its limitations (terrible agility, range and avionics), the MiG-25 has proved surprisingly capable in air-to-air combat, downing a brace of Iranian F-4s (and an F-5s). The most successful Iraqi MiG-25 pilot was Colonel Mohammed Rayyan, who was credited with 10 kills. In Desert Storm the type shot down a US F/A-18 Hornet, and even put up a spirited dogfight against the then invincible F-15. 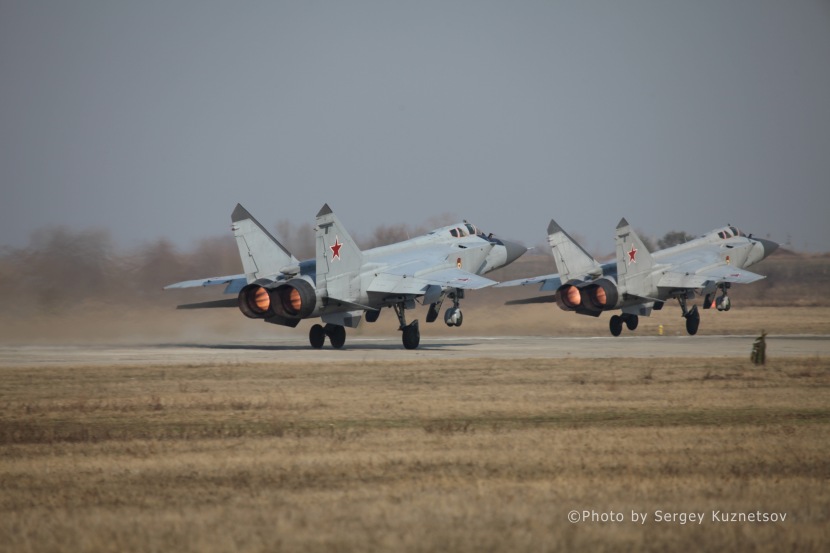 The MiG-31 is the Volkswagen New Beetle to the MiG-25’s Volkswagen Beetle. Beefier and far technologically superior, the MiG-31 remains in service with the Russian air and space force today.

In 1986 six MiG-31s intercepted an SR-71 over the Barents Sea by performing a coordinated interception. It is rumoured that after this interception, no SR-71 flew a reconnaissance missions over the Soviet Union.

Structurally, it’s a little different to the MiG-25, being 49% arc-welded nickel steel, 33% light metal alloy, 16% titanium and 2% composites. It is also an absolute beast, with a maximum take-off weight the same as a Boeing 737 airliner — or more than five MiG-21s! Armed with the longest range air-to-air weapon outside of Sweden and comfortably able to outdrag a Raptor, the MiG-31 remains in a league of its own.

Not only did the YF-12 actually fly, it could also comfortably exceed mach 3. It was the largest and fastest fighter that ever flew, and smashed a load of speed and altitude world records. When the F-108 was cancelled in 1959, it seemed a waste to junk the advanced radar and missiles so someone had the bright idea to stick them on a top secret spyplane airframe then in development: the A-12 (which later evolved into the famous SR-71 Blackbird). Ironically, it was designed to shootdown Soviet bombers, yet was made from Russia-sourced titanium (it had been procured with an innocent-sounding cover story).President Johnson announced the existence of the YF-12 in 1964, allowing it to be used as a cover story for any observed test flights of the still-secret A-12/SR-71. Stealthy, supercruising and capable of flying at extremely high altitude, the YF-12 was in many ways the grandfather of the F-22 Raptor.

Please do help us. Simply click on the donate button above – you can really make a difference (suggested donation £10). You will keep us impartial and ad-free (any ads are from WordPress, not from us) – and allow us to carry on being naughty.

A big thank you to all of our readers.

Follow my vapour trail on Twitter: @Hush_kit
Go on- donate and keep us in fancy clogs and cashew nuts. The donate buttons can be found on this page. Thank you.

You may also enjoy B-52 pilot chooses Top 10 Cold War bombers, Flying & Fighting in the Mirage 2000: a pilot interview, The World’s Worst Air Force, 10 most formidable dogfight missiles, The ten coolest cancelled airliners, Ten incredible cancelled Soviet fighter aircraft, Ten worst Soviet aircraft, Ten incredible cancelled military aircraft, Fighter aircraft news round-up,  11 Cancelled French aircraft or the 10 worst British military aircraft, Su-35 versusTyphoon, 10 Best fighters of World War II , Su-35 versus Typhoon, top WVR and BVR fighters of today, an interview with a Super Hornet pilot and a Pacifist’s Guide to Warplanes. Flying and fighting in the Tornado. Was the Spitfire overrated? Want something more bizarre? Try Sigmund Freud’s Guide to Spyplanes. The Top Ten fictional aircraft is a fascinating read, as is The Strange Story and The Planet Satellite. The Fashion Versus Aircraft Camo is also a real cracker. Those interested in the Cold Way should read A pilot’s guide to flying and fighting in the Lightning. Those feeling less belligerent may enjoy A pilot’s farewell to the Airbus A340. Looking for something more humorous? Have a look at this F-35 satire and ‘Werner Herzog’s Guide to pusher bi-planes or the Ten most boring aircraft. In the mood for something more offensive? Try the NSFW 10 best looking American airplanes, or the same but for Canadians. 10 great aircraft stymied by the US.