“Our times may not understand the work you’ve now completed”

This line was spoken at the funeral of Elsa Andersson, who died at the age of twenty five. These words share something of the enigmatic quality that Elsa had, both in life and in death.  Her gravestone read ‘First and only female aviator in Scandinavia’.

A slender boy-girl Icarus, a Puck, an adventuress; a fatalist, a yearning, a sign of modernity…one can easily get lost in the mythology.  To find the real girl I had to peel away all these veils, added by writers, artists and gender theorists. Here I will add my own sketch of her- as a young woman fascinated by technology, an adrenalin junkie and a true artist, proud and dedicated to her craft.

On a cold January day in 1922, 4000 people gathered to watch an aerial show. This was a popular family entertainment, where all ages and social classes mixed. Picnic baskets were packed and Sunday best put on; it was an event to see and be seen at. It was a spectacular show, demonstrating the success of man in conquering the sky.

A yellow Albatros sails up to 2000 feet, a small figure climbs out onto the lower port wing and waves to the crowds below.

This is the highlight of the show, the famous girl who jumps.

Growing up on a farm as the eldest child, Elsa became motherless at the age of six. She grew very close to her dad and his work with the land. It is a time where new technology is revolutionising the farming industry. From an early age Elsa studies the new equipment and techniques that her progressive father invests in.  He takes her shooting with the boys and she develops a taste for physical activity, innovation and adventures, preferably all together.

She learns how to drive, and must have cut the image of a pioneering flapper girl in her car, sailing through the Swedish landscape as a teenage girl…

Her brother is smitten by the America bug and leaves for an adventure overseas.  Elsa too dreams of America, but when she is 16 her life changes course.  She is taken to an aerial exhibition created by Enoch Thulin.

Thulin was an early pioneer of flying in Sweden. He owned the Thulin Aeroplane Factory which was not too far from Elsa’s childhood home. This was a visit that seemed to distil Elsa’s passions.  Like a 1970s touring groupie, she chased Swedish air shows around the country, hungry for the thrill that aviation gave her.

It seems almost morbid that families would gather to watch such dangerous shows. The flying machines were rickety wooden structures, held together by little more than piano wires, sailing cloth, spit and hope.

Despite and (partly because) of the dangers involved, Elsa was determined to fly and her father supported her ambition. 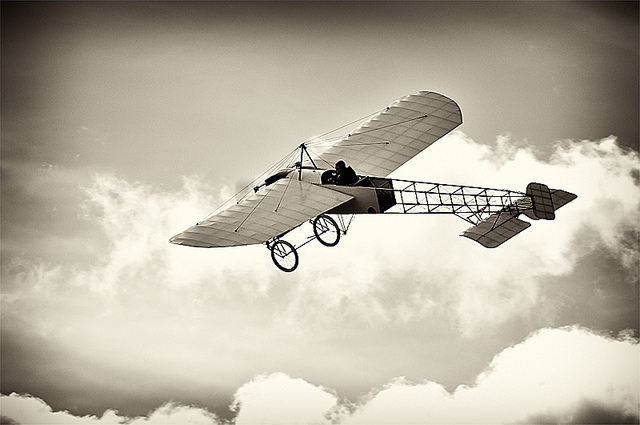 At the age of 24, when most other girls were safely married off and busy breeding, Elsa got accepted into Thulin´s flying school.  It was an expensive venture, until then only accessible to well-to-do and middle-class men. The fee, roughly equivalent to £200 (and a further £200 deposit for possible repairs of equipment) was paid by her father.

She did not let anyone down.  Elsa was an embodiment of her own motto that ‘courage and determination are the best qualities in a human being’. She passed theoretical and technical tests with distinction and also found a social scene where she felt at home amongst the other (all male) aviators.

Elsa was to be Thulin´s last student when he died in a flying accident only a few months after enrolling her. Elsa was given her aviator diploma (now Flying Certificate).

An article from this time, describes how a group of young aviators from Thulin’s School take a journalist with them on a flight excursion up to Gothenburg.  They set off on a warm and clear summer’s day and navigate by tracking the railway line. After a while, encounter strong turbulence and the reporter fights a violent nausea and feels how his ears block. Lifting his gaze he describes the sight of Elsa seemingly in her own world engrossed in a book- “Such a curious woman; silent, serene and completely lacking of nerves!” – An interesting observation in a time where nerves and women were more or less synonymous.

Whether Elsa’s next decision is based on a career strategy or a craving for adventure we will never know. What were the prospects for a female pilot in 1921… in Sweden?  It seemed like there were none. So what’s a girl with an flying certificate to do? Adventure over, point proven; back to conformity? Not Elsa.

She decides to become a parachutist.

The only parachute expert in Sweden, Raoul Thornblad, is of the popular opinion that jumping is a man’s territory and he refuses to take on a female student. Therefore Elsa packs her bags and sets off to the wild excitement of  Weimar Berlin to train under Otto Heinecke, parachuting instructor. Parachuting from aeroplanes was in its infancy, and fatal jumps were far from rare. 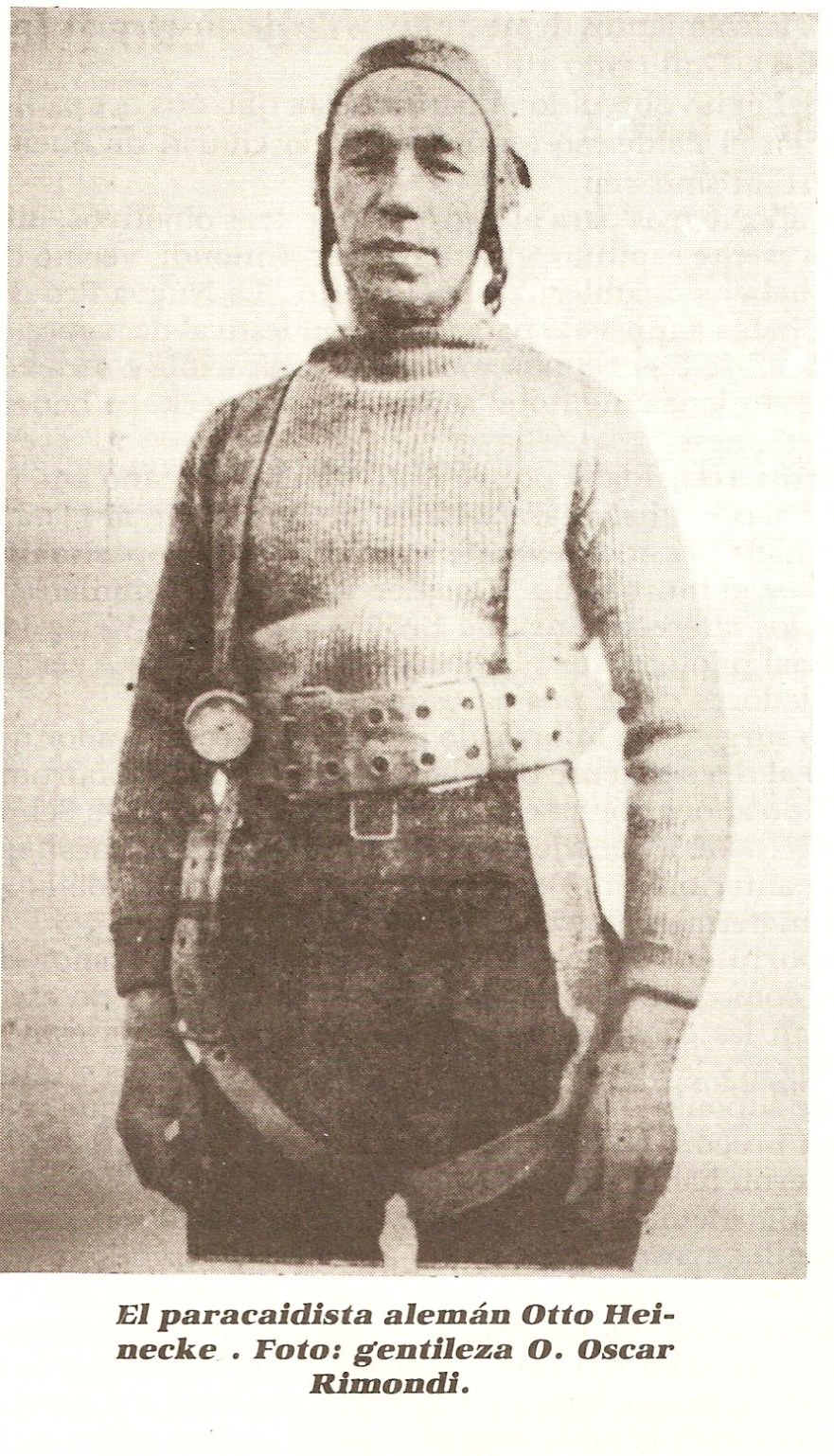 The course only lasted a few weeks. In September 1921 Elsa had her parachuting certificate, despite not having actually done a real jump from an aeroplane. However, in typically dauntless act, she had already enrolled her virgin jump. The jump was to be mere days later during an aerial exhibition in South of Sweden. Elsa was far and away the most novel and titillating act on the bill.

It’s a glorious autumn day and 2000 spectators watch Elsa throw herself out head first (as one should at the height of 2000 feet). It’s a perfect jump and she lands gently amongst the lake grass, a bit wet, but one can assume pretty jubilant.

Perhaps still elated from her first success she returned the following Sunday to do it again.  Before her jump, she meets a fellow Swedish aviator, senior in both years and experience along with a German ex-fighter pilot. The men make fun of her choice of parachute, referring to it as a ‘Heinecke sack’.

“ You’d never get me in one of those… not for a million kronor!” exclaims the German.

The Swedish man said he would only use one of those in the face of imminent danger.

“It’s a piece of cake”  Elsa cuts back with a smile.

She does get to carry her own bag home, albeit with a twisted ankle that forces her into a short period of rest.

By now Elsa was living like a traveling circus artist. Far from sailing smoothly on her novelty status as Sweden’s only female aviator, not to mention show parachutist, she relentlessly pushed herself and her shows forward. Her performances become increasingly dare-devil. One can understand why many people ascribe her with a taste for self-destruction.

Many have questioned her motives, was it an eagerness to appease a sensation-hungry audience? Or was it, as many continue to speculate today, that she nursed a growing taste for danger, a heightened sense of life when faced with the very real possibility of sudden death?

Was she making a political act for gender equality?

She got signed up as a parachute performer with a new aerial company in Orebro, Sweden. Amongst fellow aviators she is known and appreciated for her sprightly and courageous nature and the passion that she invested in her art.

4000 people below, her biggest crowd yet. The jump she has planned is a new style, that she has never done before.  She has planned her boldest and most showy jump yet. She’s going to jump standing from the wing, rather than from the cockpit.

She is upbeat, excited and focused. Left hand holding onto a rail on the lower port wing. Wave to the crowd. Jump, head first.

A few somersaults, a black speck in the air. A figure that is meant to change shape into that of a jellyfish as the parachute folds out…

Those with binoculars have witnessed the struggle she had with a cord, that was stuck under her arm. Elsa is a heartbeat over the tree tops when the parachute finally begins to unfold.

And she crashes. But she will forever keep falling and flying in the imagination of the masses. With all the ballads, stories and films she continuously inspires, her story is more that of a momentarily arrested movement than a work completed.

If you enjoyed this, you may get a thrill from this love letter to Swedish aeroplanes or this Viggen tribute. 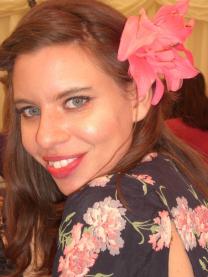