In the 1980s, the concept of ‘Stealth’ was mysterious, cutting-edge and sexy. This appeal was harnessed to sell films and toys; one example of the latter was Testors’ LHX Stingbat, a notional stealthy ‘Light Combat Helicopter’. We asked Ron Smith, former Head of Future projects at Westland Helicopters how it would have fared in real life.

“Interestingly. I was looking at real Stealth Helicopter projects from early 1982 in my role as Westland Helicopters Head of Future Projects. I remember showing an image of WG44 at a defence conference, which took place shortly after the sinking of ‘Atlantic Conveyor’.

Another related subject in which I have experience is the NOTAR™ (no tail rotor) system developed by Hughes / McDonnell Douglas Helicopters (MDH) and used on the MD Explorer. It depends (in part) on a boundary layer control system called Circulation Control, where a jet of air is ejected out of a slot (or slots) running along a curved surface. Changes in the mass flow from the slot allow rapid changes in the lift (circulation) around the aerofoil. Very high lift coefficients (>6.0) can be obtained and rapid variations can be achieved for control purposes.

My PhD related to experimental tests and a theoretical model of such a system, the latter being capable of modelling more than one blowing slot on a surface.

Andy Logan of MDH, who gave a paper on NOTAR to the Royal Aeronautical Society (RAeS) when I was the Chairman of the RAeS Rotorcraft Committee was kind enough to reference my PhD in his presentation. (A developed version of my theoretical model was used for quick look optimisation of NOTAR, as it could handle multiple blowing slots).

Having said all this, what about the Testors Stingbat LHX?

A quick look at the photographs of the model reveals some interesting features, but leaves a number of questions unanswered.

The main features include:

As one might expect, there are a few issues with this design. My main comments relate to the tail boom and anti-torque / directional control; Infra-red suppression; viability of the gun turret solution shown; inadequate downward view from the cockpit; design of the main rotor blades; weapon load out; undercarriage.

A really quite significant thrust is required to counter main rotor torque and provide for yaw manoeuvre against the torque when in and around the hover. In the MD Explorer, the downwash across the tail boom is deflected by the circulation control air ejected from longitudinal blowing slots. This produces a side force on the tail cone that partially offsets the main rotor torque (this requires a circular section tail boom and is not consistent with the shaped rear fuselage shown. An adjustable tail nozzle (with air supplied by a gearbox-driven fan) supplements the blown tail boom. In forward flight, when the downwash no longer blows across the tail boom, directional stability is provided by twin fins (with rudder control) mounted on the end of a tailplane.

The Boeing- Sikorsky RAH-66 Comanche used a version of the Fenestron (fan-in-fin) anti-torque control, dubbed Fantail by Boeing Sikorsky) allied to a canted tailfin. The Fantail was optimised for reduced acoustic signature (compare, for example the penetrating pure tone of the Gazelle with the much quieter systems on the EC135 and later model of the Dauphin).

With no fin area and a very small exhaust nozzle, there must be serious doubts as to the directional stability and control of the Stingbat LHX design. Furthermore, the rear fuselage shaping is inconsistent with the implementation of a NOTAR system, if that was considered. 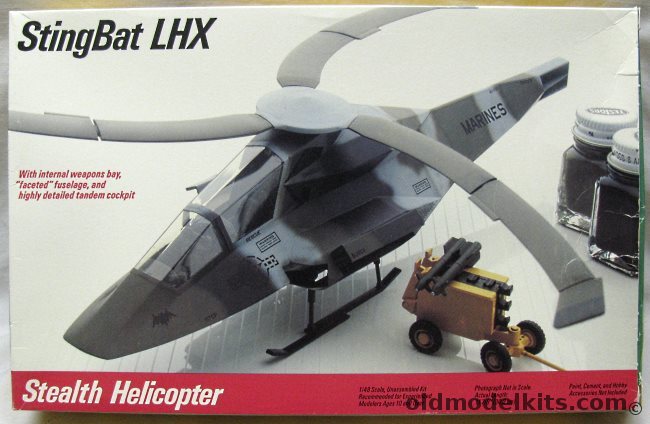 The shaped tailcone of the Comanche was mainly taken up with a bulky exhaust infra-red suppression system and this was also a prominent feature of the Westland WG45 and WG47 projects. I’ll assume that the Stingbat adopts a system similar to that on the Comanche. 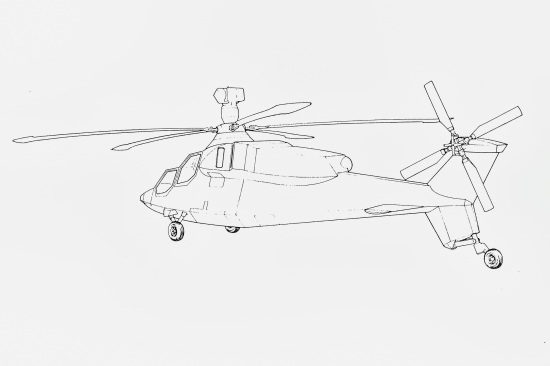 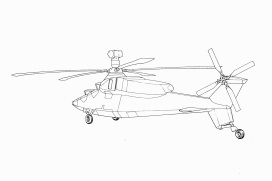 Helicopters adopt a nose down attitude in forward flight. This means that frontal ground targets appear above the nose of the helicopter when it is flying at speed. Firing the gun at such a target means firing upward relative to the helicopter, universally resulting in a forward-mounted turret with decent upward look angles. (see A129, Tiger, Cobra, Hind, Rooivalk, Apache, Havoc, etc). That shown on the Stingbat is entirely impractical.

The flat shaped nose and wide fuselage may obstruct downward view, although this could be overcome by slaving the retractable sensor to a helmet-mounted sight. A sensor behind a mesh-covered aperture (as adopted by the F-117) might offer a lower signature solution that the retractable sensor pack shown. (Although the F-117 does find it worthwhile to implement retractable comms aerials).

Assuming a low basic tip speed, high Mach numbers will only be encountered close to the advancing blade tip. This explains why those helicopters that do feature any blade sweep only do so close to the tip. The other major difficulty is that sweep along the whole blade will introduce large in-plane bending loads in the blade due to the centrifugal loads trying to straighten the blade out. (The end result would almost certainly be increased rotor system weight).

The two-section blade looks as if it has a separately controlled outer section with a small control tab. This is a good idea as it would potentially allow higher frequency control inputs (known as Higher Harmonic Control), which could reduce external noise, possibly eliminate blade slap, and reduce on-board vibration.

The primary targets for most attack helicopters are enemy main armour, command and control vehicles, and air defence systems. Some form of tandem warhead precision guided missile is required – these are quite large and heavy. The ones shown fitted to the model look like reduced length AIM-9s or, at any rate, air-to-air rather than anti-armour weapons. 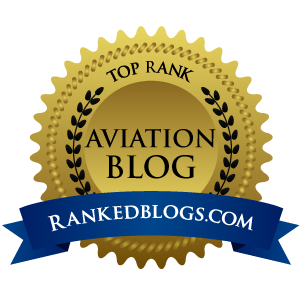 Because each sortie carries with it a finite probability of being engaged by the enemy, it is important to carry enough weapons on each helicopter that a small group of helicopters can inflict significant damage without having to fly multiple sorties. This typically means eight weapons (assumed for WG-44 to WG47), with Apache carrying a maximum of sixteen weapons. Even the Comanche managed six weapons in its weapons bay.—

The provision on the Stingbat does not appear to be sufficient.

It’s hard to tell exactly what is provided, but Crashworthiness (used to be based on Mil Std 1290A) is a key consideration. I assume that the skid undercarriage is retractable for signature reasons, but I cannot tell how it is stowed. It looks too flimsy to be crashworthy and the apparent introduction of shock struts may prove problematical in terms of the avoidance of ground resonance.”

Ron Smith, Co-author of Two up down under

SAVE THIS SITE! If you have enjoyed this please do consider donating to keep us going.

Want something more bizarre? Try Sigmund Freud’s Guide to Spyplanes. The Top Ten fictional aircraft is a fascinating read, as is The Strange Story and The Planet Satellite. The Fashion Versus Aircraft Camo is also a real cracker. Those interested in the Cold Way should read A pilot’s guide to flying and fighting in the Lightning. Those feeling less belligerent may enjoy A pilot’s farewell to the Airbus A340. Looking for something more humorous? Have a look at this F-35 satire and ‘Werner Herzog’s Guide to pusher bi-planes or the Ten most boring aircraft. In the mood for something more offensive? Try the NSFW 10 best looking American airplanes, or the same but for Canadians. 10 great aircraft stymied by the US.