Eurofighter GmbH, producer of the Typhoon fighter, is beginning to emerge from a period of serious self-reflection. Recent sales campaigns have ended in bitter defeat. Eurofighter has watched big prized contracts being dished out to all of it rivals. It lost in Switzerland to the Swedes, in Japan to the United States and in India to the French. Rafale, Typhoon’s closest rival, had emerged victorious in India, the biggest fighter contest in the world. Future enhancements to Rafale are almost certain to be bank-rolled by India, as well as making sales to additional customer more likely for the French fighter. This was disastrous news as the Rafale is very similar in capability to the Typhoon. Could the shrinking fighter market support two such near rivals?

Added to this gloom was the F-35’s seeming invincibility to cancellation. The F-35 is set to become the first massed-produced stealth fighter, available to all (well, almost all). Many air forces have been envious of the US’ stealth technology since the F-117’s star-turn in the 1991 war with Iraq. As well as the promise of stealth, the F-35 has enormous political backing and Lockheed Martin’s incredible mastery of the black arts of military hardware promotion. Despite the F-35’s dire development problems, customers are still clinging to the notion that the F-35 will be the Model-T of stealth and will make ‘aluminum’ aeroplanes obsolete overnight. However, the F-35’s problems have given Eurofighter an extended time window in which large sales have been possible, but these opportunities have been repeatedly squandered. To many observers it was looking like Typhoon was a dead duck, that would fail to achieve any more significant export sales.

After several years of misery for Eurofighter, the last week has brought a little bit of sunshine. The most conspicuous piece of good news was from the Luftwaffe regarding Typhoon’s performance over in Alaska. A detachment of 8 German Typhoons from JG74 were deployed to Red Flag 2012 in Eielson AFB in June. During the exercise they took part in basic fighter manoeuvres (BFM) against the F-22. Now before I go any further, we all know the usual disclaimer: without details, and in particular without rules of engagement specifics, not much can be inferred from BFM anecdotes. But…the following exciting titbits did emerge-

These are all very interesting claims. The latter point reminds me of a conversation I had with a Eurofighter representative a few years ago. I asked him if Typhoon could out-climb the F-22. He replied it could. Two days later he withdrew this comment.

The confident statements by Pfieffer are significant for two reasons:

Of course the Raptor decimated the Typhoons at Beyond Visual Range, a domain where the F-22 is still peerless. But, the Raptor is also one of the very best close-in dogfighters, thanks partly to thrust vector control (TVC). Performing well against the F-22, even if just in the Within Visual Range domain is still a notable achievement. On the subject of TVC, Luftwaffe pilots noted the F-22’s tendency to sink when employing thrust-vectoring. This echoes the experience of the F-15C pilots who flew against India Su-30s in training exercises. The USAF Eagle pilots were quick to identify counter-tactics to the energy depleting TVC moves employed by IAF ‘Flanker’s, though admittedly the F-22 is probably far better at recovering energy than the Su-30.

2.  These were German Typhoons

Luftwaffe Typhoons (for the sake of clarity I will not refer to them as ‘Eurofighters’ as the Luftwaffe generally does) are the worst equipped of the partner nations (the RAF aircraft are the best). To put it simply, if the worst Typhoons can put up a decent fight against the F-22, what could the best Typhoons do?

The defensive systems are not to the same spec as the RAF, lacking several components and featuring a smaller amount of data about potential threats. They do not have an infra-red search and track device, possibly the best way to track a low Radar Cross Section (RCS) target like the F-22.

Importantly they didn’t have the Typhoon’s advanced helmet system. The helmet displays vital information to the pilot and allows weapons to be slewed onto targets very quickly indeed and at extreme angles. 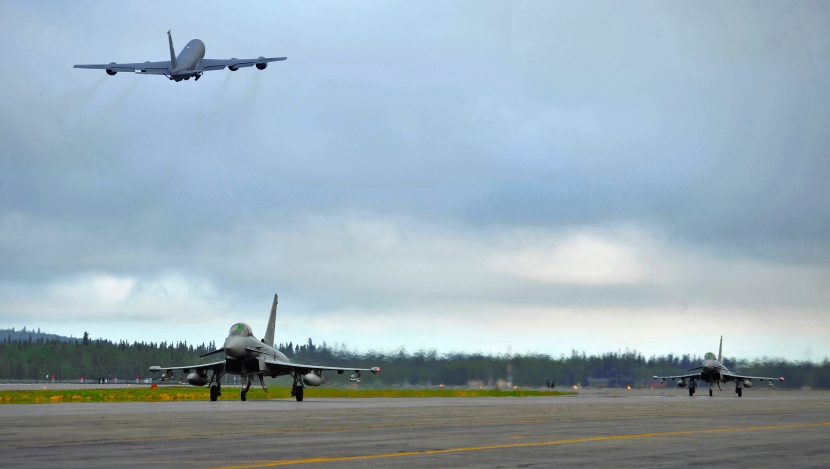 RAF Typhoons took the helmet system to a multi-national exercise in Malaysia last year. The system was deemed to be a strong contributor to the Typhoon’s domination of air combat exercises against F/A-18s, F-16s, MiG-29s and advanced F-15 variants during this training event.

The JG74 aircraft sent to the US were upgraded examples. Changes included an upgrade to the aircraft’s radar software and new radio, mission data and countermeasures software system. Other modifications were classified. 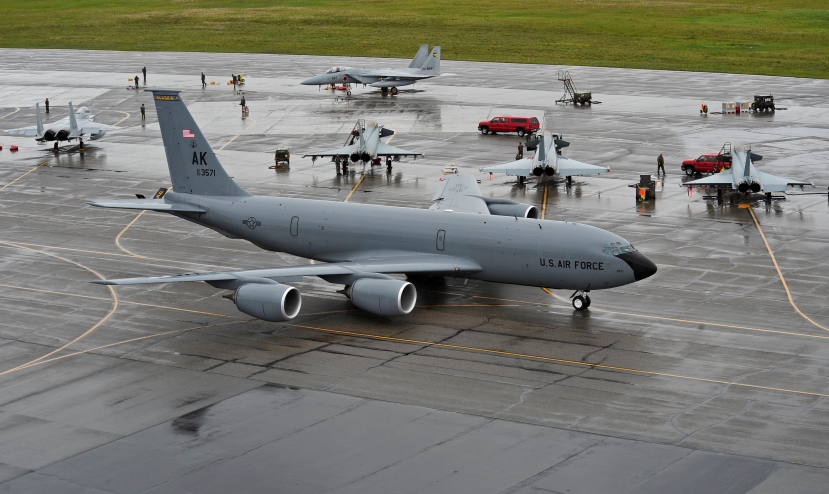 Luftwaffe Typhoons are considered behind the curve in terms of tactics and equipment, especially when compared with RAF aircraft. This success in Red Flag is thus particularly good news. Especially as Germany is keen to offload as many of its older Typhoons to export nations as possible, offering these low-mileage, early Tranche aircraft at competitive rates.

The next piece of good news, is that Eurofighter is waking up to the basics of sales. Shockingly, it emerged that the company put little or no effort into reducing unit costs to potential buyers, instead relying on the weight of high-level governmental support. The obvious example must be India, where the Typhoon bid was supported by extravagant promises and visible efforts by heads of state, but ultimately lost on cost grounds.

Guiseppe Orsi, chairman and chief executive of Finmeccanica (one of Eurofighter’s main partners), acknowledged the lessons learnt in an interview with the Financial Times. He stated:

“We will all be around the table and start from what is the competitive price to win a competition, as we do in the commercial field, then we go back and see what each company has to do in order to get that competitive price.”

The partner companies must work together to achieve this for the greater good of Typhoon sales. Clearly the united ‘front’ of Eurofighter is a smokescreen for large defence contractors viewing their partners as rivals and being unwilling to share sensitive information on costs and margins. Sadly it seems Eurofighter represents a microcosm of the EU itself, its problems analogous to a failing Europe.

However, awareness and public admission of this is a sign that this culture may change.

The aircraft itself is by all accounts excellent, the missing piece to the puzzle of its failure to achieve greater export success may have been found.

If this interests you, support Hush-Kit.net with a donation (buttons above and below). If this goes well we’ll be able to give you much more! Recommended donation £10. Many thanks for helping to keep us impartial and independent.