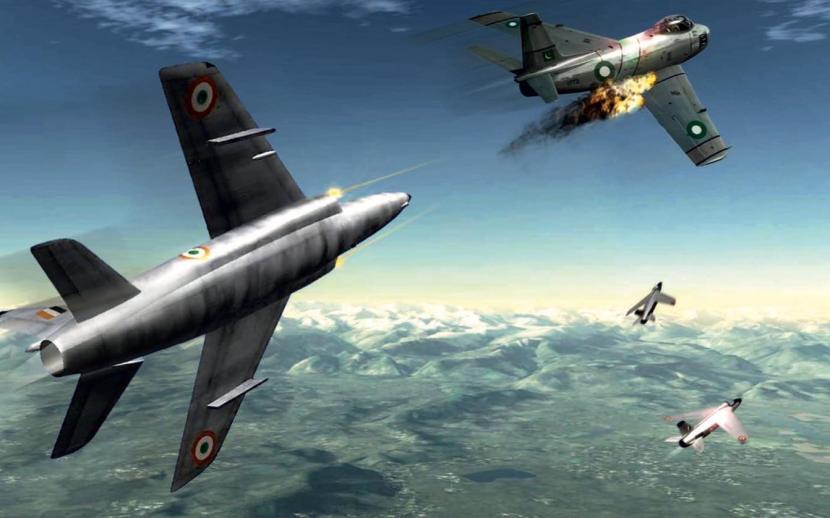 In 1971, Indian Air Force Gnats fought Pakistan’s Sabres in ferocious bloody dogfights. Despite only weighing the same as a a Dodge Durango, the tiny jet fighter proved a formidable machine. We spoke to IAF Wing Commander Sunith Francis Soares about flying and fighting in the Gnat.

The Gnat was conceived by the British designer, ‘Teddy’ Petter. One of the greatest aircraft designers was lived, his other creations included the Lysander, Lightning and Canberra. Countering the trend for ever larger, more costly, fighter aircraft the Gnat, which first flew in 1955, was a ‘pocket rocket’. Although relegated to training duties in Britain, Finland and India used the type in the fighter role. India received its first Gnat in 1958, and it went on to prove itself in the heat of battle. 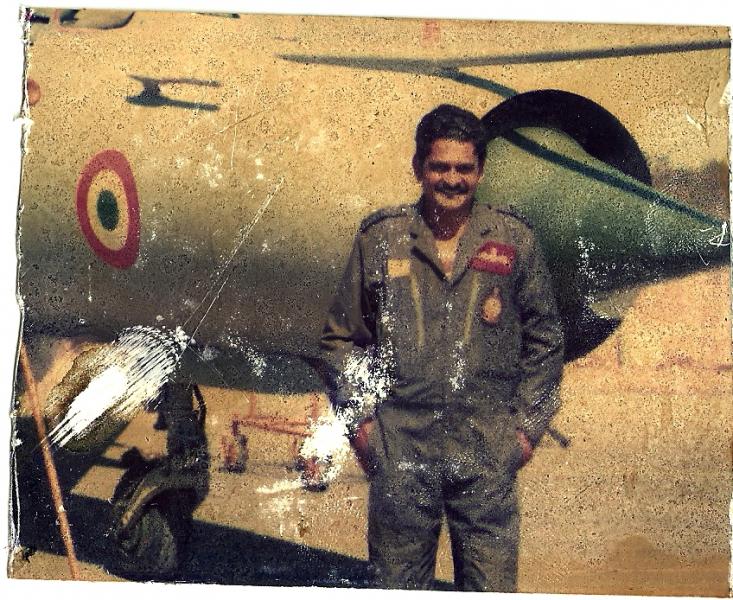 “With slats out and full power he executed a motherless turn, but the Gnat not only kept up with him degree for degree but gained some distance in. After, we found that we had clocked more than 9G during this turn. Roy hit the right wing near the fuselage. I saw the wing catch fire, canopy fly off, before we overshot the flaming aircraft. Strike one Sabre.”

How long did you fly the Gnat and with which unit?

What were you first impressions of the aircraft?

What was the best thing about the aircraft? 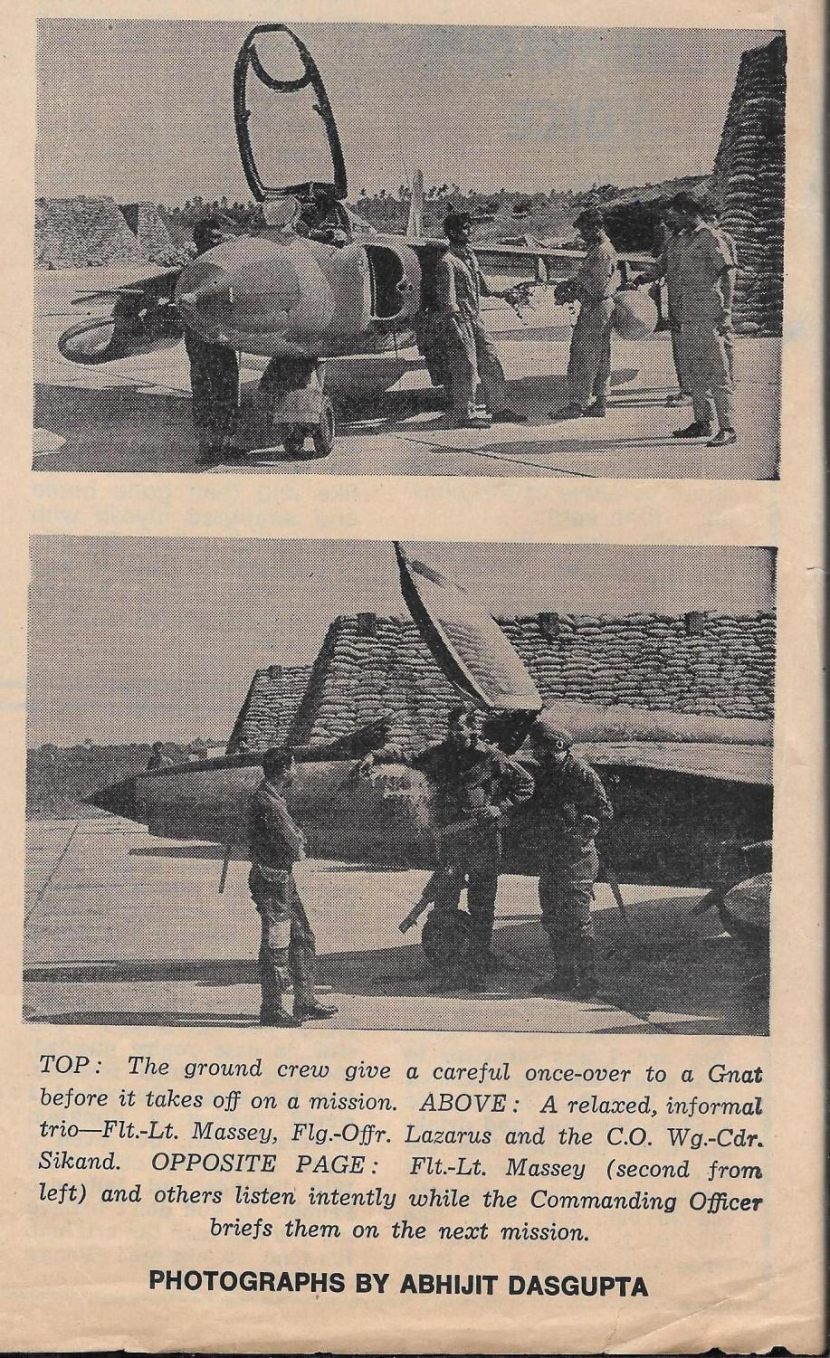 What was the worst thing about the aircraft?

2019 analysis: How good is the Block II Pakistan JF-17 fighter aircraft today compared to its peers and potential threats? Here

Which other types have you flown?

What was your most interesting mission?

“It was a few days before the 1971 war with Pakistan actually began. We were based at Kalaikunda, near Kharagpur, and for many months had been maintaining a detachment at Calcutta for air defence duties. The ORP was a make-shift one, with sand bags to protect the aircraft and tents for the crew.

The Indian army was geared for battle and in the Boyra sector had moved adventurously into Pakistan territory setting up defensive positions in preparation for the coming battle. This sort of aggressive posturing must have been particularly provocative to the military authorities at Dacca and they decided to use some airpower to displace our troops.”

“The first strike by the PAF sabres was on 22 November 1971, at around 10.00h – just as the sun dispersed the morning fog. Four Gnats were scrambled but arrived too late to pose a threat. A second strike followed soon thereafter but once again the Gnats could not make contact and returned to base a trifle dejected. Wg Cdr BS Sikand, our CO, who had led the first two sorties, then decided to take the afternoon off for some beer and socialising and handed over the lead to Roy, and I was slotted in as number 2. Ganapathy and Don retained their positions at 3 and 4.

As I settled into the makeshift ORP, I silently prayed for another strike. Don and I were playing scrabble when the klaxon went off once again. One more formation had been picked up on the radar heading toward Boyra. Our controller this time was Fg Offr Bagchhi and the time was 14.40h, and soon we were hurtling through the skies at low level with the throttles against the stop. At low-levels and high speeds, the Gnat is not easy to fly as the noise level is atrociously high and the aircraft bucks like a rodeo horse. It became difficult to hear Bagchhi and after a slight reduction in speed and a modest gain in height we reached the border to be told that the enemy was at 2 o’clock 4 miles. Ganapathy and Don being on the right flank and therefore closer to the target should have been able to spot the aircraft but the afternoon haze made this difficult.

I then saw a glint of metal and by sharply focusing my vision saw one aircraft at about three kms, perched as if to commence a dive. I called out contact and commenced a crisp commentary on the flight path. Roy having spotted the aircraft, decided to pull over the flank pair to manoeuvre behind the aircraft. This positioned us at about 1.5 kms behind the Sabre. Someone by this time must have warned him about us, as he went into a classic steep turn with the intention of shaking us off. With slats out and full power he executed a motherless turn, but the Gnat not only kept up with him degree for degree but gained some distance in. After the incident, we found that we had clocked more than 9G during this turn. The Sabre now came out of the turn to gain some speed and this allowed us to close in, as the Gnat has a very good acceleration, and we were soon at firing range. Roy fired a small burst which missed but followed quickly with another which hit the right wing near the fuselage. I saw the wing catch fire, canopy fly off, and the start of the ejection process before we overshot the flaming aircraft. Strike one Sabre. 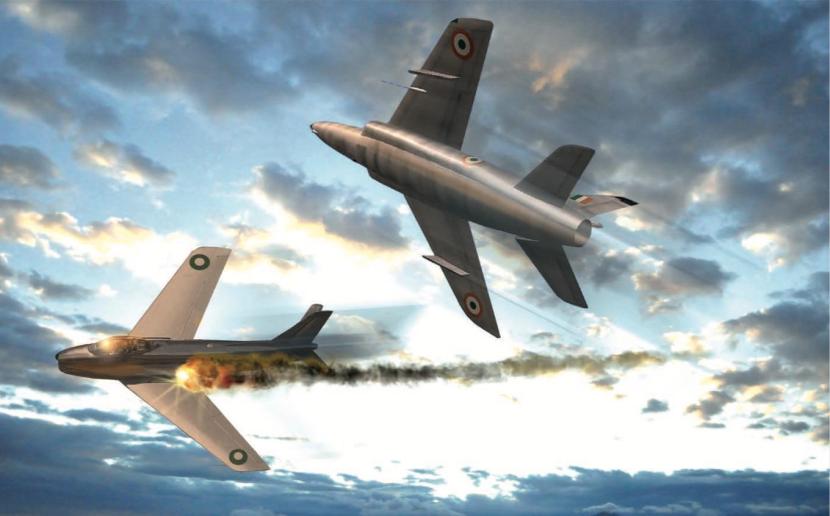 While we were in combat, I heard Ganapathy call out that he had spotted a Sabre and he manoeuvred behind the aircraft very quickly to fire his first burst which missed. In the mean-time, a third sabre came out of the blue- literally- between Ganapathy and Don, at a distance of 200 yards or so. With lightning quick reflexes Don swerved his aircraft and in a flash, fired his guns which struck the Sabre on the wing causing it to explode. The debris hit Don’s aircraft on the nose and drop tank. Yes, drop tank! In our enthusiasm, we had forgotten the cardinal principle of combat: jettison the tanks. Strike two Sabre. The pilot ejected. This pilot was taken PoW and later released. He went on to become the Chief of the Air Staff of the PAF.” 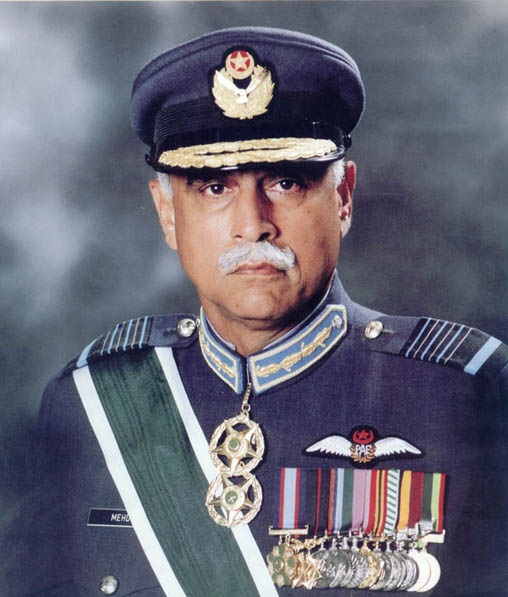 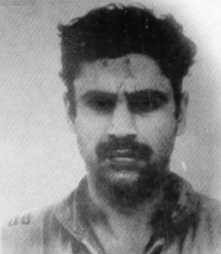 We can only bring your articles like this with your support. Our site is absolutely free and we have no advertisements (any you do see, are from WordPress). If you’ve enjoyed an article you can donate here.

Meanwhile Ganapathy had fired a second burst which this time was better directed and hit the sabre on the right wing which also caught fire. Strike three Sabres. During our combat which I estimate did not last more than 3 minutes, I saw small puffs of incandescent lights which I later found to my dismay, was AA shells bursting all around. The Indian army air defence regiment was having a field firing practice at our expense. It’s a good thing their gunnery was not as good as ours.

It was now Bagchhi’s turn to take over and he assembled us for our return to base. After our rendezvous we came in a finger four formation for a run in, but because of Don’s damaged aircraft did not intend to do any dramatics, but Ganapathy would not have any of it. After peeling off he came in for a victory roll to tell the world that we had shot down three Sabres without any loss.”

How combat effective was the Gnat?

“Quite. It had a good kill-to-loss ratio.” 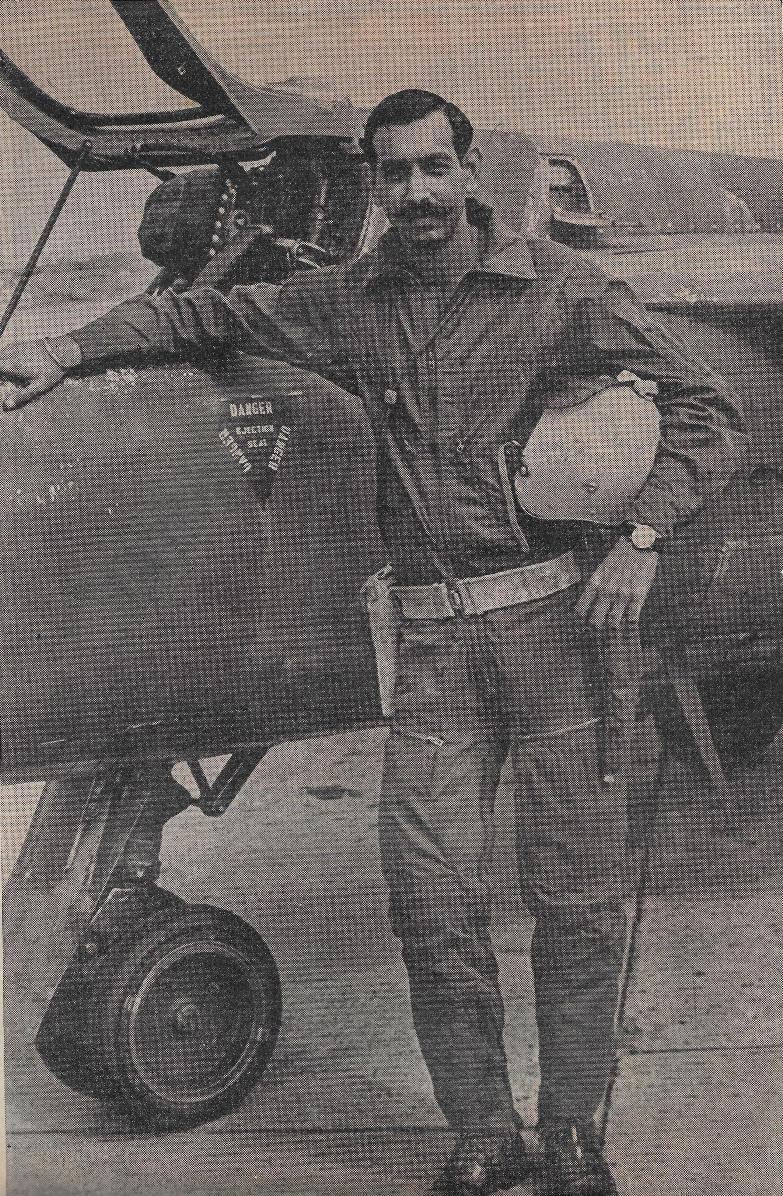 What was your most memorable mission and why?

“I would like to mention another memorable occasion. Our Stn Cdr in 1971 before and during the conflict was a tea drinker who took drastic action to curtail our alcohol consumption (to no avail).  He exhorted us to emulate the Israel pilots who in the 67 conflict flew 4 to 5 sorties, who drank only orange juice (which by the was was not available at the time except in rusty tins of doubtful quality). On 5 Dec six of us flew five sorties in a span of 9 hrs literally jumping from one aircraft to another with briefings and nibbling snacks in between. we gleefully sent our ‘autho’ book that evening to the Stn Cdr and requested him to join us for a drink.”

Which three words would you use to describe the aircraft?

What were the threat aircraft it was facing and which was the most challenging and why?  “Sabre. That was the most potent threat in the sub-continent. Its turn performance was quite good.” 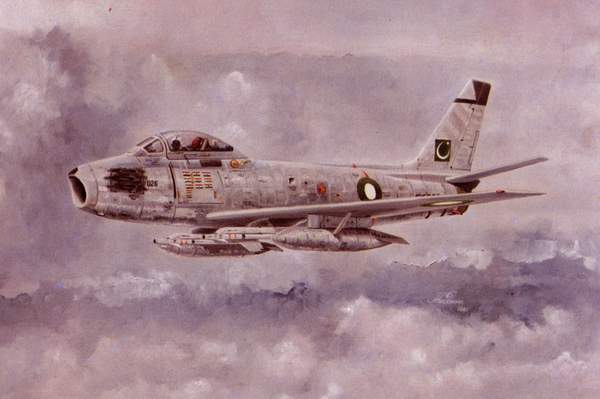 Where were you based and what was life like on the base?

Kalaikunda. Due poor govt remuneration in that period, life was dictated by the letters ‘NM’….no money or next month. however life was not uncomfortable.

“Serendipitous, in that most of the married pilots had intercaste/creed marriages which made for excellent social action. parties were great fun with dancing and games. occasional interspersed picnics and overnight outings were happy events.”

How effective were the weapon systems and avionics? What additional equipment would you have liked?

“Nothing to shout about. We made do with ‘Mk 1 eyeball’ and ‘moving thumb display.'”

Everything you always wanted to know about Indian air power, but were afraid to ask: In conversation with Shiv Aroor here

How good was your training?

“Highly indigenous with no exposure to international tactics

I’d like to dedicate this to the IAF Gnat Brotherhood and especially to the war veterans of 22 Sqn, IAF (Swifts) who did a splendid job!”

Special thanks to Anshuman Mainkar for making this interview possible. Excellent article on the this subject on his blog here.

We can only bring your articles like this with your support. Our site is absolutely free and we have no advertisements (any you do see, are from WordPress). If you’ve enjoyed an article you can donate here.