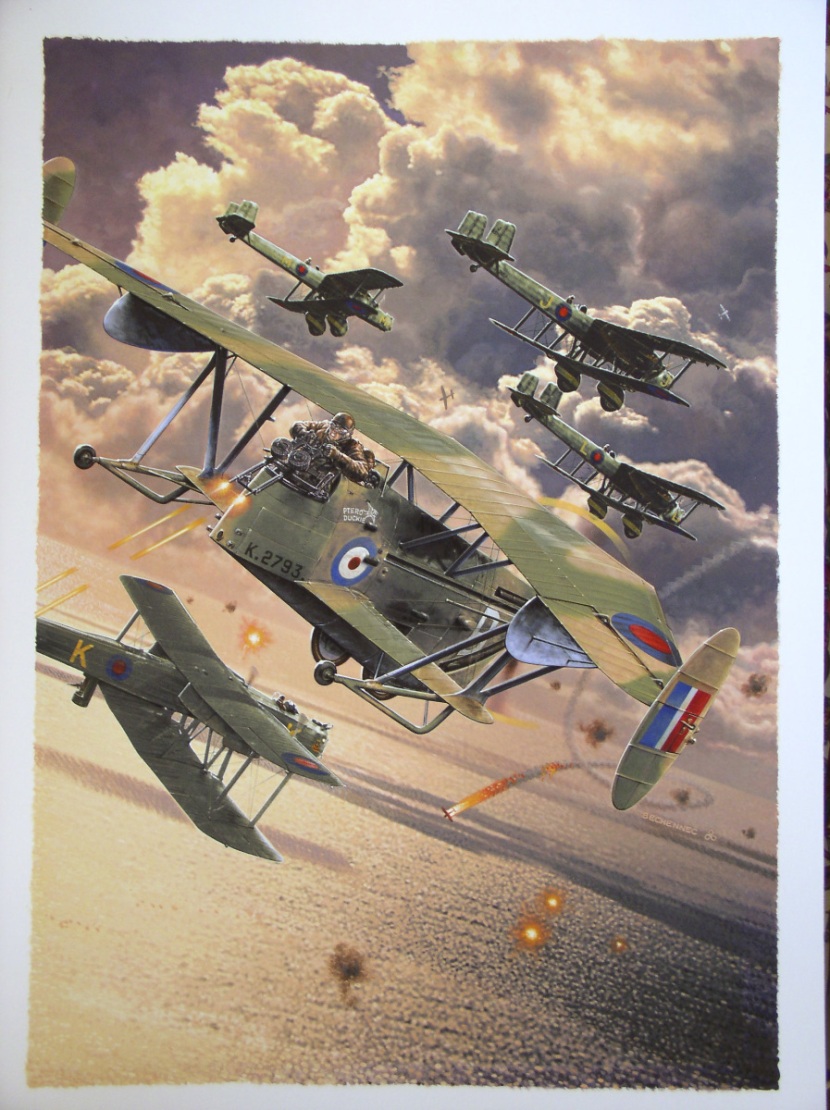 As early as 1848, one John Stringfellow was experimenting with heavier-than-air flight in Somerset in West England. This West English tradition continued with Westland Aircraft, formed by the father of the great aircraft designer Teddy Petter (creator of the Canberra, the Lightning, and the Gnat among other aircraft) in 1915. Westland famously produced the extremely effective Lysander, the almost brilliant Whirlwind and the superb Lynx helicopter, but not all the designs of this innovative company entered production. A delve through the Westland archives reveals a host of fascinating flying machines savagely discarded by history.

The extremely attractive Wizard fighter started life as a racing aircraft known simply as the ‘Racer’. In an age of biplane and sesquiplane fighters, a parasol monoplane was something of a novelty. Despite the stigma of its unconventional configuration, the first Wizard attracted Air Ministry interest, and Westland was asked to submit the design for  Specification F 20/27, a requirement for a new RAF fighter, a role the Wizard would have performed admirably. The A&AEE’s test pilots praised the Wizard’s performance: it was impressively fast and had a remarkably good climb rate. But they also noted the pilot’s limited forward view and considered the aileron control loads too great. So, the Air Ministry gave Westland a contract to refine the Wizard. The Wizard II that followed was fitted with a new, all-metal wing of increased span and reduced chord. By mounting the wing on more conventional struts and reducing the central section, the pilot’s forward view was improved. The engine was also replaced with a supercharged 500 hp Rolls-Royce F.XIS. The changes that created the Wizard II, which were probably unnecessary, marred the aircraft’s performance. The RAF were unimpressed and did not order it into production.  Many at Westland believed the Wizard’s failure was less to do with the aircraft, which was superb, and more to do with the RAF’s prejudice against monoplanes. 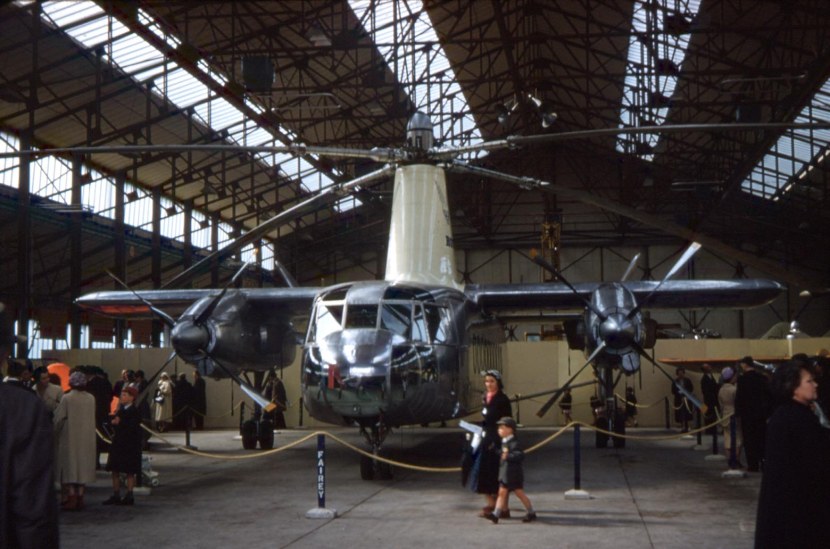 The merger of Fairey’s aviation interests with Westland Aircraft took place in 1960. Westland now had the intriguing, and much hyped, Fairey Rotodyne project.

Streaking from city centre to city centre with a top speed twice that of helicopters of the time, the Rotodyne, could have been a major transport innovation. As the world’s first vertical take-off airliner it could have revolutionised air travel, removing the need for remote airports for everything but long haul journeys.

The concept was extremely innovative. For takeoff and landing, the rotor was driven by tip-mounted jet engines. These engines did not have intakes or compressors, but were fed from compressed air piped from the main turboprop engines. The turboprop-powered propellers on the wings provided thrust for horizontal flight while the rotor autorotated (‘autorotation’ is when rotors turn around while unpowered, but in flight). Thanks to its tip-mounted jets, the Rotodyne was exceptionally noisy, an undesirable trait in a city centre airliner, and was cancelled. Debate still rages about the degree to which the Rotodyne’s noise levels could have been reduced.

The Westland C.O.W. Gun Fighter was a response to Air Ministry specification F.29/27 for an interceptor fighter armed with the ferocious Coventry Ordnance Works 37 mm autocannon. The resultant aircraft was based on the earlier Interceptor (Vickers created a rival design, the bizarre Vickers 161 COW-gun fighter). The gun of the Westland C.O.W Gun Fighter was mounted at  55º in order to fire up into an enemy bomber when the fighter was manoeuvred directly below. Trials were discouraging, with the aircraft displaying ‘alarming’ handling characteristics, and the experiment was dropped. The concept of upward firing guns, established in World War One, returned in World War Two, when German ‘Schräge Musik’ night fighters achieved considerable success.

The Dreadnought was an attempt by Westland to perfect the new German-Dutch technology of metal aircraft construction, and explore an aerodynamic configuration with a continuous aerofoil section over all parts of the aircraft. The story of the Dreadnought begins with the Chairman of Airco sending William Wilkins to Russia to study the possibility of licence-production of the de Havilland DH4 and DH6. Mr. Wilkins returned to the United Kingdom with something far more interesting, the inventor Nikolai Stepanovich Voevodsky. Voevodsky had been in correspondence with Airco for several years with ideas for aerodynamically clean monocoque blended wing aircraft. But these plans for Anglo-Russian collaboration could not bear fruit during the Russian civil war (with Britain supporting the losing side). Voevodsky’s plans were adopted by the Aeronautical Research Committee, who were embarrassed by the German and Dutch advances and wished to leapfrog their technological lead.

The concept was given to Westland Aircraft to construct an aircraft. Ambitiously, they designed one a 70-ft wingspan. Unfortunately, the aircraft was terrible, and couldn’t fly; the first attempt at flight took the unfortunate test pilot’s legs off. As Bill Gunston put it “It was perhaps the worst form of all metal construction, the underlying skeleton of the very large wing being of enormous complexity…yet with the skin doing very little to bear loads”.

The Westminster was based on the rotor and transmission system of the S-56. Other than this, it was an all-new design.  Whereas the S-56 used massive radial engines, the Westminster was an extremely advanced design powered by two Napier Eland 229 turbines. The use of a proven rotor and transmission system was a wise one, as the cost of developing one from scratch was well beyond Westland’s budget. As it was the project cost £1,350,000 (equivalent to around £50 million in 2017) of company money. This large experimental helicopter could have led to a productionised machine capable of carry 40 passengers at 150mph for 100 miles. Two variants were proposed a civil transport version and a flying crane.

The aircraft project types with the lowest survival rate are as follows: counter-insurgency aircraft, supersonic business jets and jet trainers. Every major and minor aircraft manufacturer has had a go at some or all of these, and almost all of them fall at the wayside. Westland was no exception, and in the mid 1950s they offered the RAF the W-37 jet trainer. The idea was to get rid of initial (called ab initio in Britain to remind pilots that the RAF is posh) training in piston-engined aircraft. The RAF didn’t go for the W-37, but did embrace all-jet training for a while. 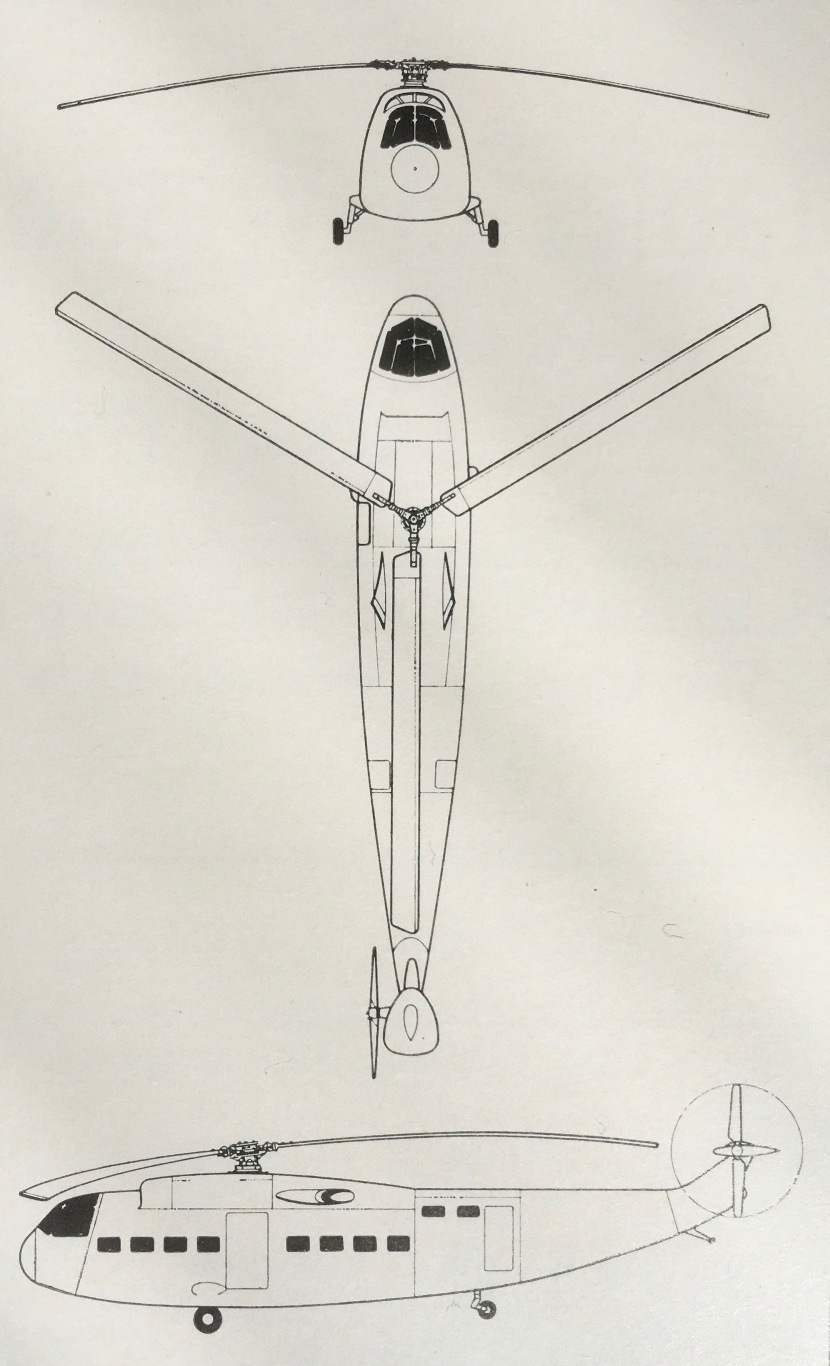 In the early 1950s Britain was creating the most advanced turbine engines in the world. The W-81 was a bold attempt to harness the turbine to build a helicopter far in advance of any other. In fact, the specs of the W-81 would still be respectable in 2017: a maximum cruising speed of 180 mph, a payload of 32 fully-armed troops or four tons of cargo and maximum range of 950 miles.

A coaxial design concept from 1979. Coaxial rotors, popular in Russia with the Kamov design bureau, have several advantages including increased payload for a given amount power. Co-axials do not have the torque issues of conventional helicopters, so do not have to waste precious power on a tail rotor – this means all power is devoted to lift and thrust. This design harvests the extra power to a ducted propeller providing extra ‘push’. The combination of a slick design, co-axial rotors and a pusher propeller would have made this design much faster than a conventional helicopter. In 2007 flew a similar design, the Piasecki X-49 ‘SpeedHawk’ (OK, I admit the X-49 also had vectoring thrust and wings). As an aside, Westland has held the absolute speed record for conventional helicopters for 31 years- a modified Westland Lynx achieved a speed of 249 mph in 1986.

The titanic W-90 would have been the biggest helicopter in the world by a huge margin. It was planned that the W-90 would carry 450 soldiers; the largest aircraft that actually went into production, the Mi-26, could only carry 90. The W-90 was to be powered by three large Armstrong Siddeley turbojets mounted one to each blade. At 196 feet in diameter, the main rotor would have been almost twice that of the Mi-26’s, and at 200,000 Ib the W-90 was also almost twice as heavy. Troops would occupy the three separate decks, sharing the lower floor with cargo, military vehicles or artillery.

J. W. Dunne (1875-1949) developed some fascinating theories on the nature of time and consciousness, and he also pioneered stable aircraft and swept wings. At the age of 13 he had a dream he was flying an aeroplane that needed no steering — a significant anecdote, as Dunne was a firm believer in precognition in dreams (in fact he did not believe in the linear progression of time, something he thought was merely an illusion brought about by human consciousness – see Slaughterhouse-Five for a similar idea).

Here was a man who had the idea of tailless swept-wing aircraft years before the Me 163 was melting its groundcrew. His work inspired the brilliant engineer G.T.R Hill (designers have designations rather than names) who was looking for a way to save the many lives lost in air crashes. Dunne’s designs were the first inherently stable aeroplanes and thus had a degree of inherent safety, to this Hill added pivoting wingtip controllers which could act as ailerons and (when activated in unison) elevators. The Pterodactyl series had good handling and explored several new ideas (including variable geometry wings in the IV version).

An all-metal fighter variant, the Mk V, was built powered by a steam-cooled 650h.p Goshawk engine. As you’d expect from such a revolutionary design, it was beset with problems (the worst being the collapse of the entire wing during an early taxiing trial). But this, and other teething problems, were overcome (like the appalling Nieuport-Delage NiD 37 Type Course, the aircraft was a sesquiplane). The aircraft proved 10mph faster than the RAF’s best in-service fighter, the Demon. It was armed with two fixed .303 machine-guns, racks light bombs and a two-way radio. The addition of an electrically powered gun turret did not reduce the aircraft’s impressive 190 mph top speed (there is some debate as to whether this was actually fitted). The fighter was considered in two configurations: one with a tractor engine and rear-mounted gun turret (the Mk V) and the other a pusher aircraft with a front-mounted turret (the unflown Mk VI). Though promising, the RAF deemed the advantages of such a radical new design too small compared to the potential risks.