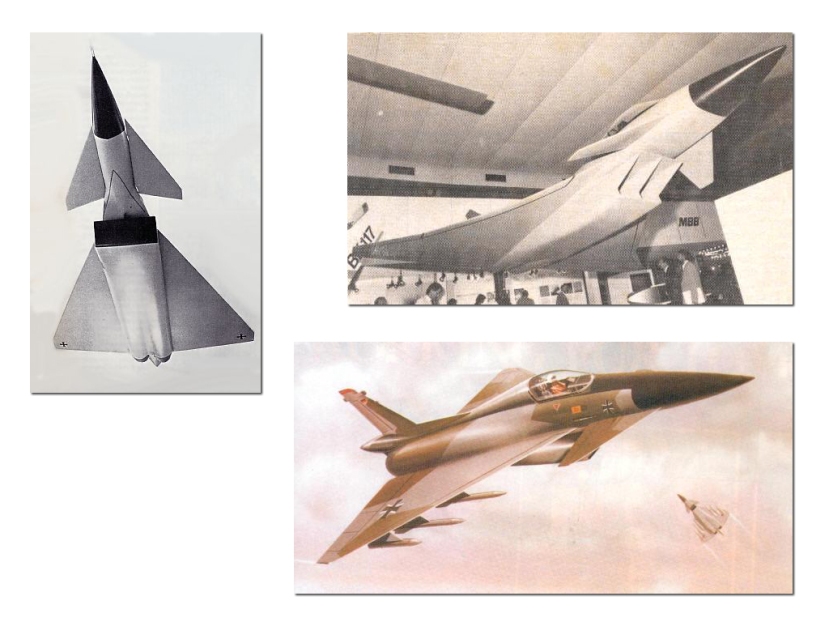 The TKF90 was a German fighter concept that informed the design of the Eurofighter Typhoon.

Following the cancellation of the BAC TSR.2 in 1965, it was suggested that the RAF purchase fifty General Dynamics F-111Ks and one hundred AFVGs. The Anglo-French Variable Geometry aircraft was a proposed multi-role fighter. The troubles this project endured illustrate the three main obstacles still facing European fighter development: aggressive US marketing backed by political might, Britain’s inability to go it alone and France’s insistence on keeping its fighters French.

The F-111 was seen as a lower cost, lower risk alternative to TSR.2, but as early as 1965 the British Government was aware that the US F-111 programme was having serious and expensive development issues. British experts visiting the General Dynamics plant at Fort Worth assessed the aircraft. They noted that the high-lift systems (especially the leading edge slats) were ill-suited to the extreme conditions of low-level flight, this was an alarming problem as this was exactly the type of flying the F-111 was conceived to do. The engine intake design was terrible and the engine was prone to surging. General Dynamics asked for assistance from the British Royal Aircraft Establishment (RAE) to solve the mess of the intake design, and one Dr. Seddon was sent to help.

Before the TSR.2 had been scrapped, the British and French were considering collaborating on the development of a swing-wing fighter. 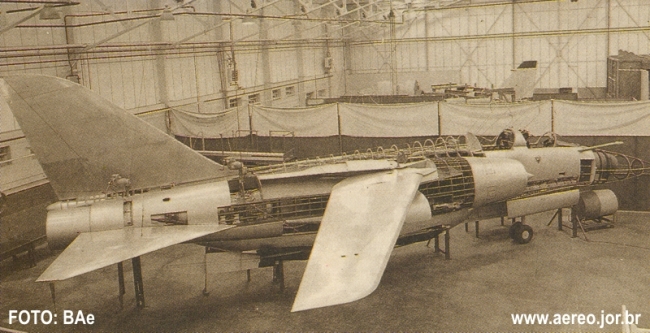 The AFVG was a projected multi-role strike fighter with formidable capabilities. As well as land-based variants for the RAF and Armée de l’Air, it would have been available in carrier compatible variants for both British and French naval use. It was to have a radius of action of 500 nautical miles when configured for the strike or reconnaissance role, a top speed of well over Mach 2 and a ceiling of 60,000 feet. It was to be powered by two SNECMA/Bristol Siddeley M45Gs. This was a new turbofan that was used, in its M45H version, for the VFW-Fokker 614 airliner. At the early stages of the project the French wanted the strike mission to be prioritised , the British on the other hand, wanted it weighted toward the fighter mission. In 1966 this position reversed: Britain had ordered the Phantom to meet its fighter needs, and France having left NATO, felt more vulnerable from attack and wanted a new, more potent air defence fighter.

The design team was composed of members from Dassault and BAC. The skilled, experienced designers were dedicated and worked in a spirit of mutual respect; the same cannot be said of the officials involved in the project.

Friction between Europe’s two biggest aviation nations was common, and the British grew distrustful of French officialdom, believing it favoured indigenous offerings over collaborative efforts. Meanwhile the costs of the AFVG were rising.

The British distrust turned out to be correct when it was found that Dassault was secretly working on its own swing-wing fighter. In fact, a technology demonstrator, the Mirage G8, was being readied to fly. The British were furious at this duplicity. British embassy staff and project officials went to confront Dassault boss Bloch and co-chairman of the Anglo-French committee, Lecamus. The French team denied knowledge of the project, but the British were insistent. Lecamus knew the game was up, and said to Bloch in French ‘It’s no good, they know’. They do not however admit to the existence of the Mirage F1, another threat to the project. Soon after, in June 1967, France pulled out of AFVG citing the rising cost as the primary reason. France pursued its own swing-wing projects for a short time, and then cancelled them. Later, the F-111K was also cancelled.

Meanwhile on the other side of the channel, AFVG became the UKVG, a British project lacking carrier capability. However, the culture had moved away from indigenous aircraft and the UKVG received little funding. Britain sent a delegation to Canada to ask if it could join the huge F-104G replacement discussions featuring Belgium, Canada, the Netherlands, Germany and Italy. These nations were a little miffed by a non-F-104 operator joining these talks, but reluctantly let them in with ‘observer status’. Britain’s real motive may have been to poach supportive nations to co-develop its UKVG, which with international backing became the MRCA (multi-role combat aircraft, not to be confused with the Indian medium fighter contest or the proposed MiG-29 variant). Germany, Italy and the Netherlands joined the project (though the latter soon pulled out). Canada and Belgium were irritated that their attempts to procure a cheap fighter had been hijacked, by the British desire to develop a far more sophisticated and therefore expensive type. MRCA was eventually christened ‘Tornado’ and remains in service today, four decades later. In RAF service the type has performed frontline combat missions for a longer period than any other type, from the daring airfield raids of Desert Storm in 1990, to the controversial attacks in Syria in 2015.

The Tornado has been so successful, that it has damaged the potential of the follow-on Typhoon project- as Tornado is still a viable ground attack platform – Britain, Germany and Italy have been slow to develop Typhoon’s ground attack potential, something which has affected its export potential. Even today, in 2015, Eurofighter is boasting that Typhoon is currently being integrated with weapons the Tornado has been carrying for a decade. Frontline Typhoons do not yet have Brimstone or Stormshadow, nor a dedicated reconnaissance pod (nor do would they be able to carry the superb RAPTOR). As well as superior equipment, the RAF Tornado force have the most experienced (at fixed-wing close air support) crews in Europe. The Typhoon will have big boots to fill, and with the inevitable wait for the F-35 it may have to do it alone for some time.

Afraid to go it alone

The AFVG story highlights the cultural differences in British and French military aircraft development: Britain industry isn’t allowed to go it alone, and France is scared of its aviation industry falling into international hands.

There are no cost advantages to the collaborative development of an aircraft, despite the many times this has been claimed. The advantage is that once they’re in motion they’re harder to cancel. Generally, they’re also harder to export.

The total cost to the UK taxpayer of the Typhoon, is around the same as the French have paid for Rafale- between 50 and 60 billion Euros.

The British government is happy to pay for two types of national military aircraft development: familiar things (Nimrod, Hawk etc) and unfamiliar things (yep, we’ll pay for UCAVs as we’re not quite sure what they are).

Despite Britain having the necessary technological base to develop its own aircraft alone, it is only allowed to work in an international team. Some might ask whether squandering this ability is a good idea (even China and India struggle to make genuinely indigenous advanced aircraft). But likewise, it could be argued that the notion of nation is at best an irrelevance. Lockheed Martin, whose mastery of technology and PR are second to none, have adopted a strange and powerful approach with the F-35: it is all things to all men- American or collaborative depending on who you ask.

Looking at Rafale and Typhoon in flight together, one is struck by the similarities. Following a recent joint exercise a RAF Typhoon pilot was asked the perennial question: which is better Typhoon or Rafale, he replied that they are very similar aircraft. The parallel development of such similar aircraft is enormously wasteful, though what you conclude from this depends on your bias. One French observer noted that if the Eurofighter nations had joined Rafale, split the costs and sent its designers/ factory workers to France, a fortune would have been saved. Though this would have been hard for the non-French nations to swallow.

One of the reasons for Gripen’s success is the modest production facilities it uses. Eurofighter and Dassault have invested in enormously expensive modern facilities to produce their fighters. This level of ambition is expensive, especially in the case of France where the amount of aircraft produced is so low.

Western Europe never succeeded in developing a common fighter. This fantasy was crushed by the tension between France and Britain, and the high-pressure sales of lower-cost US types. The F-35, combined with the high cost of the Typhoon and Rafale has killed Europe as a fighter maker in the long-term. A fighter takes 20 years to develop, and with the possible exception of Turkish Aerospace Industries (TAI) TF-X (which may be developed with Swedish help), there are no future clean-sheet European fighters in development.