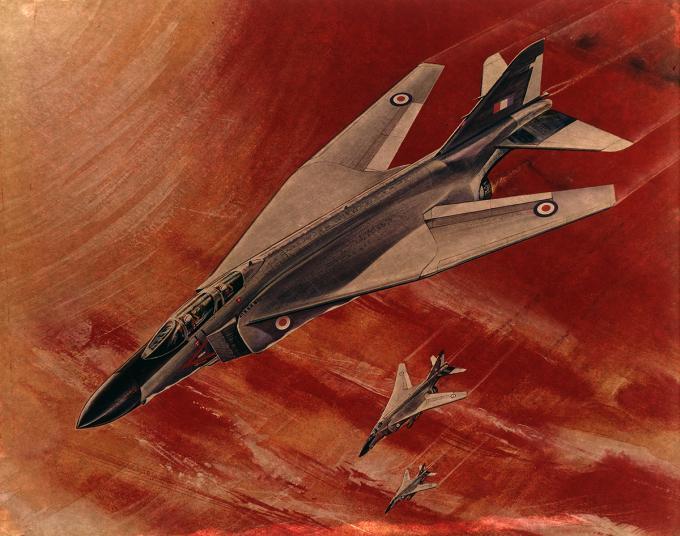 Everyone loves the F-4 Phantom, a brutal smoking Cold War monster that polluted the sky in an apocalyptic belch of black sooty thunder. As thrilling as the actual Phantoms that entered service were, there is a tantalising family of F-4s that almost made it into the real world. Several of them were cancelled for being too good and threatening sales of newer aircraft — and one succeeded in its role as a unique test aircraft. Here are some of the Phantoms that never were.

In the 1970s, the Israeli air force wanted a reconnaissance aircraft capable of carrying the extremely impressive HIAC-1 camera. The F-4 was considered, but the G-139 pod that contained the sensor was over 22 feet long and weighed over 4000 pounds – and the Phantom did not have the power to carry such a bulky store and remain fast and agile enough to survive in hostile airspace. One solution was to increase the power of the engines with water injection, something that had been done for various successful F-4 record attempts. This combined with new inlets, a new canopy and huge bolt-on water tanks promised a mouth-watering 150% increase in power. This would have allowed a startling top speed of mach 3.2 and a cruising speed of mach 2.7. This level of performance would have made the F-4X almost impossible to shoot-down with the technology then in service.

The F-4X would also have been a formidable interceptor – something that threatened the F-15 development effort, causing the State Department to revoke an export licence for the RF-4X. Even with the increase in power, the Israeli air force was still worried about the huge amount of drag, but a solution came in the form of a slimmed-down camera installation in a specially elongated nose. This meant the interceptor radar had to be removed, which assuaged the State Department’s fears and the project was allowed to continue. However worries from the F-15 project community returned (as did worries about how safe the F-4X would have been to fly) and the US pulled out. Israel tried to go it alone but didn’t have enough money, so the mach 3 Phantom never flew. 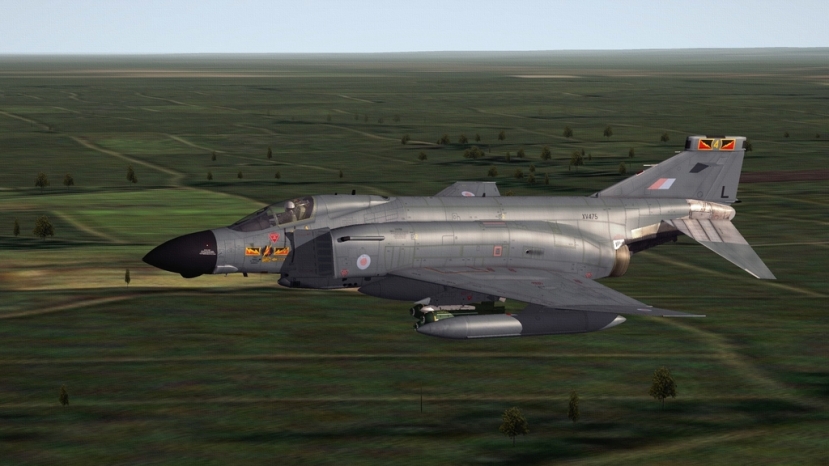 The Luftwaffe are cheapskates: historical examples including their desire to procure a Eurofighter ‘Lite’ with no sunroof, stereo or defensive aids — and the fact they kept the F-4F in service until 2013! To be fair, their less than zealous desire for free-spending militarism is probably a good thing considering the 20th century. Their Deutschmark-saving instincts for poundshop versions of popular aircraft applied to the Phantom, and a simplified single-seat F-4E was considered. This intriguing option was passed up for a simplified F-4E, dubbed the F-4F (which later became formidable). I couldn’t find any illustrations of this variant so have included a mock-up of a speculative RAF single-seater.

When the RAF ordered Phantoms they considered a dedicated reconnaissance version. McDonnell (it being 1966 — a year before the merger with Douglas) proposed a F-4M airframe with internal reconnaissance equipment. Known as the RF-4M (model 98HT), the longer camera nose would have made the aircraft over two and-a-half feet longer longer than a F-4M. Range would have been greater than a Phantom with an external recce pod, as this left the centreline station free for a drop-tank — and the removal of the Fire Control System and AIM-7 related hardware reduced weight. After considering the cost of such an undertaking, the RAF instead opted for an external recce pod meaning that any airframe in the fleet could perform the reconnaissance mission without sacrificing a beyond-visual-range weapon. Fascinating interview with a British Phantom pilot here.

In the late 1970s McDonnell Douglas proposed a dedicated Air Superiority variant of the F-4E, the F-4T. More spritely performance was expected as all systems associated with the air-to-ground role were to be removed, making a significant weight saving. It was to be armed with M61A1 cannon, four AIM-7 Sparrows and four AIM-9 Sidewinder missiles, or an alternative war-load of six AIM-7 (as seen in this computer generated image). Additionally, a new digital computer would have been at the heart of its weapon system. It is unclear who the intended launch customer for this variant was —  Iran, Britain, Israel, Japan or West Germany may all have found the type useful. No customer went for the T as either a new-build or an upgrade — as those air arms requiring a high level of Air Superiority could turn to the F-15 Eagle which was already in production (and was significantly more capable the proposed F-4T even its it early iterations).

The US Navy’s F-111B project was looking distinctly shaky in the mid-1960s. It was too heavy and too sluggish, so the Navy looked around for alternatives, a search which would eventually led to the Grumman F-14 Tomcat. The McDonnell company offered an unsolicited solution, a variable geometry wing variant of the hugely successful F-4 Phantom II. An assessment of this proposal, given the provisional designation F-4 (FV)S, revealed that this it was lacking in several key areas, notably combat effectiveness: the AN / AWG-10 radar and AIM-7F missiles would be a significant downgrade from the desired AN /AWG-9/AIM-54 combination. Scorned by the Navy, McDonnell offered the aircraft to Britain as a cheaper alternative to the Anglo-French AFVG then under consideration. This aircraft would have been powered by the British Rolls-Royce RB-168-27R  and given the designation F-4M (FVS). This promising project never left the drawing board. 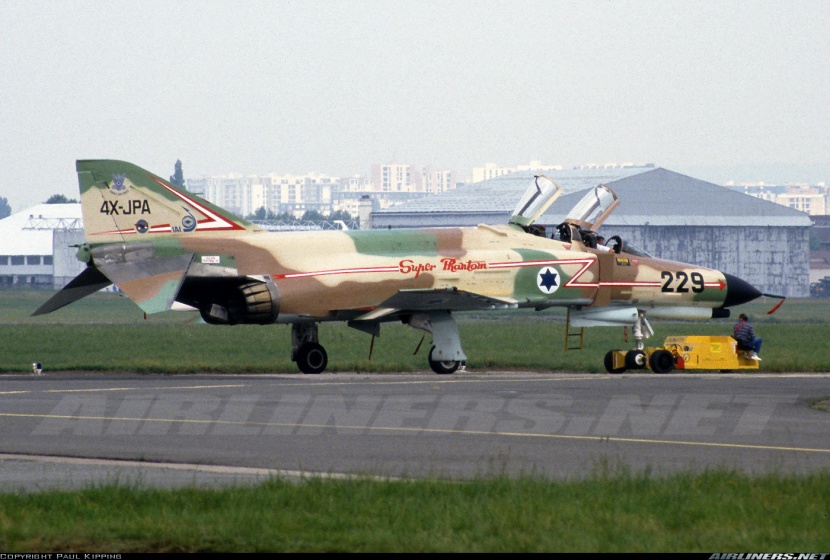 By the 1980s, the Phantom’s geriatric J79 powerplant was a liability — its poor thrust-to-weight ratio, mass of smoke and Oliver Reed-esque thirst did not belong in an age of efficient powerful turbofans. Replacing the J79 with the Pratt & Whitney PW1120 (a derivative of the F-15’s F100 for the abortive Israeli Lavi) was an obvious solution – offering a massive 25% increase in dry thrust and a whole 30% greater thrust in reheat. The new Phantom would have been a hotrod: capable of Mach 1+ speeds in dry thrust alone. The aircraft would also have an 1,100 US gal (4230 litre) conformal fuel tank under the fuselage, offering an increase in range.  The proposal was cancelled early on as some thought it was a threat to F/A-18 and F-15 sales. Despite this, Israel Aircraft Industries liked the idea of PW1120s in Phantoms, partly as this promised parts commonality with the Lavi and partly because Israel had a big Phantom force.  IAI’s F-4 Super Phantom or F-4-2000 was displayed at the 1987 Paris Air Show, but, like the earlier US concept, was also quashed.

Aircraft 62-12200 was a very important airframe, after life as the RF-4C prototype it did the same for the cannon-armed F-4E project. Its testing life was still not over — in 1972 it became part of a fly-by-wire (FBW) research effort. A FBW system was fitted to what was now known as the Precision Aircraft Control Technology (PACT) demonstrator. Following the successful completion of the FBW tests, it was fitted with a set of canard foreplanes mounted on the upper air intakes. In order to shift the centre of gravity to the rear and to destabilise the aircraft in pitch, lead ballast was added to the rear fuselage. It is not known if this aircraft was the source of the continued American distaste for canards!

This site is in danger due to a lack of funding, if you enjoyed this article and wish to donate you may do it here.

You love planes. We love planes. Save the Hush-Kit blog! Our site is absolutely free and we have no advertisements. Those who donate are:

In order to carry on we need donations— even £8 a month could do a lot of good. If you don’t wish to donate but would like to help us, then sharing our articles is the way! Thank you for your time you lovely aviation expert.

* There is no scientific evidence for these claims.