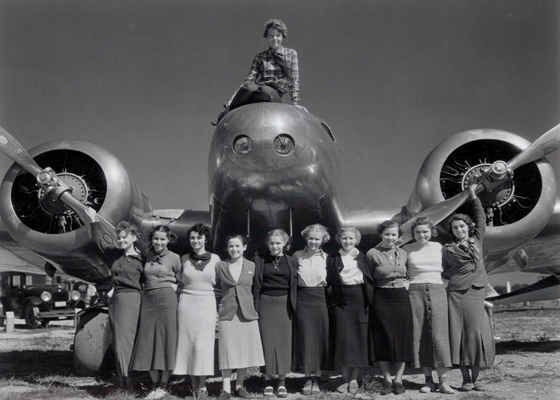 Amelia Earhart with her students, 1936

In 1929 the famed aviatrix Amelia Earhart became the first president of the ‘Ninety-Nines’ organization of women pilots. This ushered in an unprecedented decade of female aviation that saw an intrepid group of women fight for equality in the sky as well as the ballot box. It was a decade in which women set speed records (Jacqueline Cochran, 1939), solo flying records (Amelia Earhart, 1935) and beat male pilots at the Bendix Trophy Race (Louise Thaden and Blanche Noyes, 1936). Names such as Amy Johnson and Beryl Markham garnered celebrity status and in Hollywood coveted aviatrix roles went to stars of the day such as Katherine Hepburn, Myrna Loy and Kay Francis.

But despite the unprecedented rise of the aviatrix, there is one to whom the fashion world repeatedly returns. Amelia Earhart was not only the first female aviator to fly solo across the Atlantic (among setting a plethora of other records) but she was also the first woman to receive the U.S. Distinguished Flying Cross. Her tall, boyish frame reminiscent of a catwalk model understandably resounds with the fashion world, and she is frequently cited as a muse for collections from Hermes to Prada. 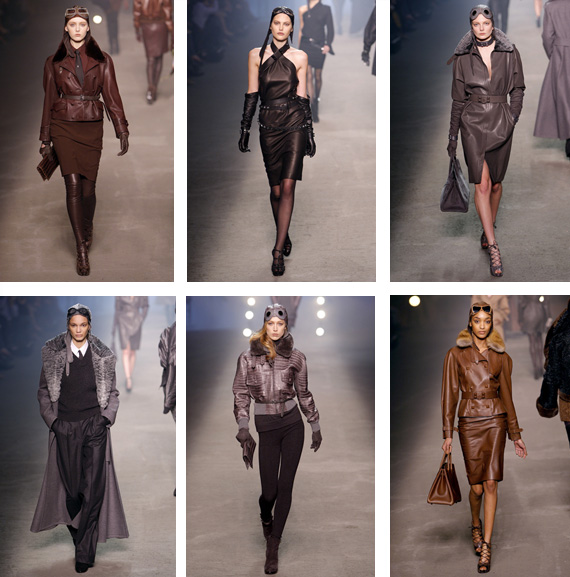 Hermes A/W 2009: As well as the profusion of flight jackets, leathers and goggles the set also featured propellers as a backdrop and the soundtrack from Casablanca. 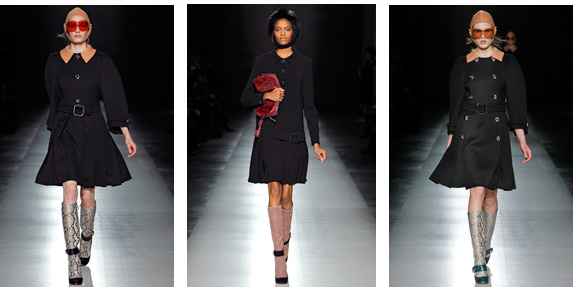 Prada A/W 2011: Alongside the flight hats and goggles the dropped waists of the majority of this collection reference the decade in which Amelia first took to the skies

But Amelia did much more than just give good face (and style). Many female pilots used their public standing to advance civil rights, from Pancho Barnes who set up the first union for stunt pilots in Hollywood to Willa Brown, who as the first African-American commercial pilot helped to open the US armed forces to African American men. Earhart herself championed women’s causes through her aviation column in Cosmopolitan magazine. She was also a member of the National Woman’s Party, and an early supporter of the 1923-proposed Equal Rights Amendment, a bill that aims to affirm equality between the sexes under US law which has consistently failed to be ratified; as such it remains to this day a glaring omission from the US constitution.

As one of the women pushing sartorial and occupational boundaries, Amelia also plays an important part in the acceptance of bifurcated clothing for women. Increased popularity in sport and keep-fit fads throughout the 1930s, coupled with the rise of Hollywood increased the amount of women in trousers in the public eye. Not only were movie stars and beach loungers donning pant suits, but sports enthusiasts like golfer-turned-magician Gloria Minoprio also defied convention by wearing trousers instead of regulation skirts to practice their craft. There’s more on golfing style here and you can see more stylishly bifurcated women right here.

But regardless of her social and sartorial achievements, it’s her much-mythologised disappearance for which Amelia is best known. Earhart and her second navigator Fred Noonan had completed three quarters of their round-the-world trip when they vanished without a trace in July 1937. Conspiracy theories, all of which are unsubstantiated, cloud her disappearance in mystique, from espionage to being killed on Saipan Island and even the less sensational claim that she survived the flight, moved to New Jersey, changed her name, remarried and became Irene Craigmile Bolam (more on this here).

In August 2012, new evidencecame to light close to Nikumaroro Island in the South Pacific. Investigators  have found debris which resembles  components of the “landing gear, including a wheel, a strut and a fender”.

Amelia represents adventure, emancipation and the romance of an unsolved disappearance: a heady blend that makes it easy to understand why fashion storytellers consistently fall in love with her. Flight jackets have become a perennial must-have, and despite individual references for each collection they’re always imbued with Amelia’s unique combination of style and danger.

But the romance of the skies holds a fascination for image-makers and fashion luminaries even without a famous figurehead in the pilot seat. The Chanel spring couture collection was staged inside an enormous (non-functional, unfortunately) aircraft, complete with monogrammed carpet and starry sky ‘outside’ the windows. The collection reputedly featured 150 shades of blue (topped you, E.L. James), which has obvious resonance not only with the firmament itself but also references the glamour of the bygone days of the Pan Am stewardess. You can see a video at The Telegraph.

And it’s not the first time that Chanel has used the glamour of aviation at its shows:

Much as Amelia Earhart has become an icon for the contemporary fashion industry, it’s little known that she was one of the first people to have what we would now term a celebrity fashion line. According to this account in the Huffington Post, Amelia was initially ridiculed for her masculine garb; the androgyny for which 21st fashion lauds her was somewhat less appreciated in the 1920s, despite the elfin ‘flapper’ figure that was in vogue. Allegedly at the recommendation of her husband/manager, Earhart developed an interest in her appearance and even had the good grace to lose the overalls and don some pretty frocks once in a while. The grateful fashion media began to pick up on this and her own range – Amelia Earhart Fashions – debuted in 1934, financed by an American tire company. 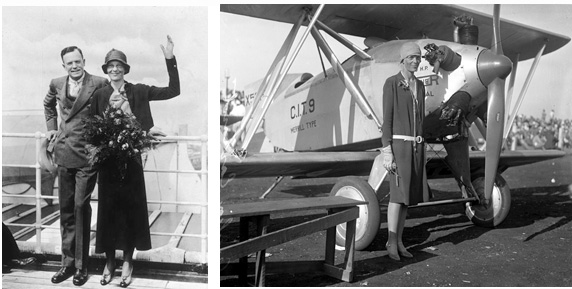 Stocked in Macy’s in New York and Marshall Field’s in Chicago, the line offered Earhart staples such as leather trenches and windbreakers in practical fabrics that were washable as well as wearable. The selling point was a combination of comfort and style, and Amelia’s ethos was carried through into the range marketed at ‘women who lead active lives.’ My favourite aspect of the collection, and the reason I wish more of it had endured, is the small aviation details that were frequently included, from the use of parachute silk to propeller-shaped buttons. But unfortunately the collection didn’t survive the retail downturn of the Great Depression and the line itself was short-lived, folding before Earhart’s disappearance just three years later. Besides a few examples preserved in a west coast museum and a replica in Kansas, for the most part the clothing, like Amelia, sadly vanished without a trace. Thankfully we have a crop of contemporary designers more than happy to keep her sartorial legacy alive.

We want to give you more, so we need something from you. This site is entirely funded by donations from people like you. We have no pay wall, adverts (any adverts you see on this page are not from us) or subscription and want to keep it that way– please donate here to keep this site going.

“I hate ruffles, and at the price I could pay, that was all I could buy. So I decided to design clothes. They are nothing exciting. Just good lines and good materials for women who lead active lives.” Picture of Earhart fashion label and quote found at the Huffington Post 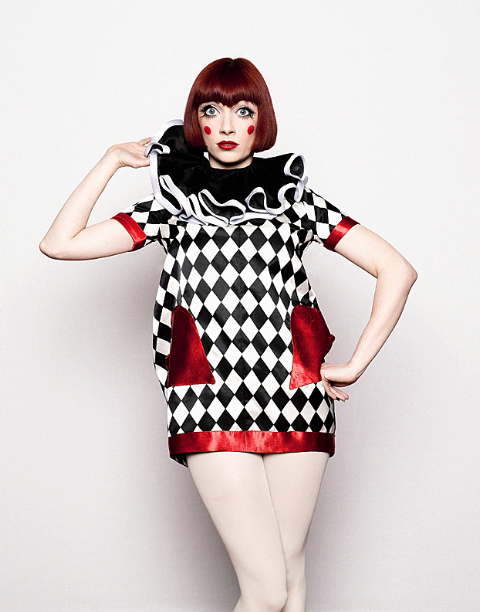 Amber Jane Butchart has had a lifelong love affair with dressing up, and is lucky enough to have turned this obsession into a career. She is a freelance writer, broadcaster and trend forecaster, and a featured fashion historian on various BBC productions from Radio 4′s Making History to the Breakfast News. She is a regular contributor to leading trend analysis company WGSN and has written for publications and sites including Fire and Knives, Clothes on Film and Fashion156, and for companies such as British Pathé and Ray-Ban. She also hosts a regular ‘In Conversation’ series at the V&A focusing on issues surrounding the costumed body in performance and fashion, and the results are broadcast at TheatreVOICE, the leading online audio resource for British theatre.

Thank you for reading Hush-Kit. Our site is absolutely free and we have no advertisements. If you’ve enjoyed an article you can donate here– it doesn’t have to be a large amount, every pound is gratefully received. If you can’t afford to donate anything then don’t worry.At the moment our contributors do not receive any payment but we’re hoping to reward them for their fascinating stories in the future.