Imagine a world without Danny DeVito, Roger Daltrey and George Lucas. There’s a parallel universe where Rick Moranis played Schwarzenegger’s brother in Twins, where The Who never happened and where Star Wars was a military project to make Reagan hard and the Soviet Union broke. This speculative universe is one in which famous figures born in 1944 never happened. One star from 1944 that never happened in this universe was the Martin-Baker MB.5. This remarkable fighter flew as a prototype and demonstrated capabilities that left every other aircraft in the shade. This superb aircraft had everything going for it, apart from timing. We asked Dr RV Smith to tell its story.

The Martin-Baker MB1 G-ADCS was a clean two seat low wing monoplane, which was built at Denham and first flown from nearby Northolt during March 1935. The company then turned its talents to the design of a series of high-performance fighter aircraft that set new standards for ease of maintenance and servicing.

The design of the MB3 was evolved into the Rolls-Royce Griffon-powered Martin-Baker MB5 R2496. This imposing aircraft featured a large contra-rotating propeller, wide undercarriage track, straight-tapered wing of 35ft span mounting four 20-mm Hispano cannon, and an under-fuselage radiator unit, similar to that of the Mustang.

The cockpit was set well-forward under a blown canopy, providing excellent all-round vision and forward view over the slim downward-sloping nose.

The MB5 R2496 was displayed publicly at Farnborough in October 1945 and in June 1946. The latter display, flown by Jan Zurakowski, was described as ‘presenting one of the most brilliant flying demonstrations of the day and was outstanding for its speed, range and manoeuvrability’. Zurakowski later said it was ‘the best airplane I have ever flown’.

The comments below have been summarised from a number of articles, several of which draw upon a 1946 report “A&AEE Report 838 Pt 1 MB5 Engineering & Maintenance appraisal”, which is held in the National Archives.

Philip Jarrett comments in an article for Rolls-Royce Magazine that ‘the A&AEE report praised the MB5 in unusually glowing terms, using a generous number of superlatives’.

Perhaps the most striking comments, which are quoted in the Flight Magazine flight test article published on 18th December 1947 and written by Wing Commander MA Smith, DFC state:

“… this aircraft is excellent and is greatly superior, from the engineering and maintenance aspect, than any similar type. The layout of the cockpit might very well be made standard for normal piston-engined fighters, and the engine installation might, with great advantage, be applied to other aircraft.”

Other articles also quote the statement that “The time necessary for a quick turn-around… would appear to be very low when compared with existing types of aircraft.”

Jarrett expands on this with the following description: “The 2,340hp Rolls-Royce Griffon 83 engine with its de Havilland contra-rotating propeller was carried on a special mounting that made its removal simple, and all of the cowling panels were also quickly removable, laying the engine completely bare ‘within a few minutes’.

Access to the carburettor main auxiliary gearbox, ignition system and Coffman cartridge starter was easy. All of the coolant radiators were enclosed within the rear fuselage, using a common intake and a controllable efflux.

Likewise, the fuselage panels were quickly detachable, allowing immediate access to all parts of the aircraft’s structure and the accessories and equipment. Every strut or member of the tubular fuselage frame was easily accessible and simple to replace in the event of damage.

The cockpit layout was described as ‘excellent.’ Martin-Baker’s patented control assembly could be removed en bloc by withdrawing a few bolts, without affecting the control settings. All three instrument panels, one in the centre and two at the sides, hinged fully forward when two quick-release handles were undone, permitting instruments to be changed with the minimum of effort.

Quickly opened bays in the upper surfaces gave access to the two 20mm Hispano cannon in each wing, with 200 rounds per gun fed by a Martin-Baker flat-feed mechanism. A servicing platform could be attached to ease the armourer’s task.” 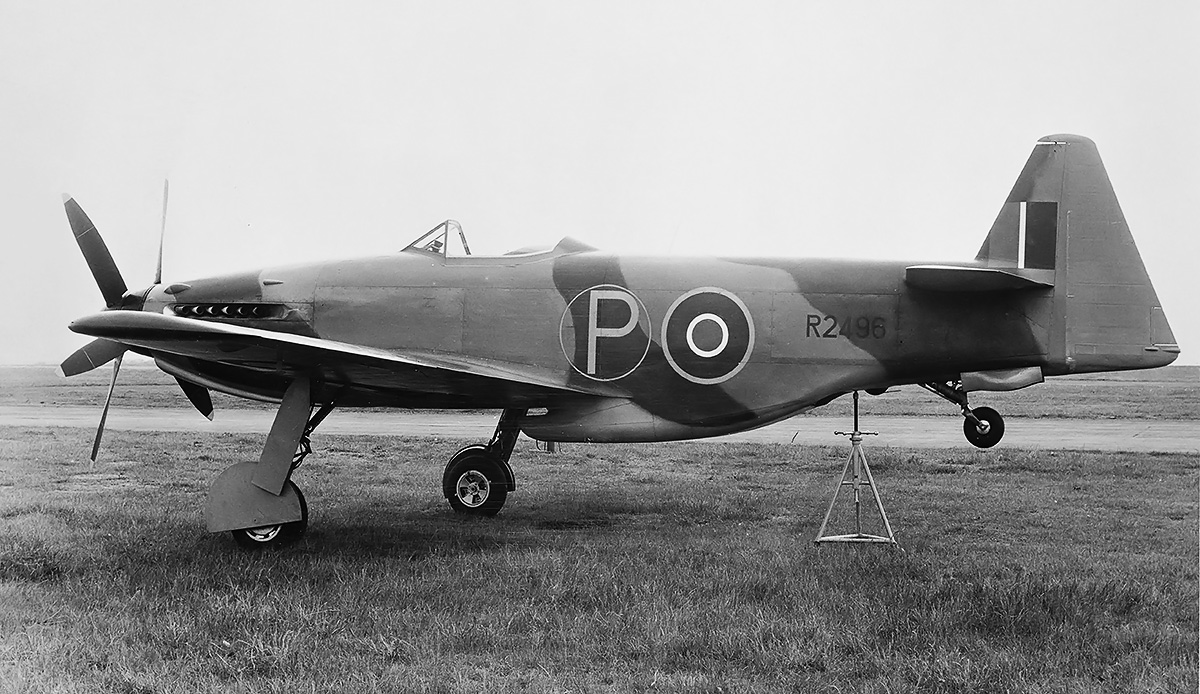 Some points made in the most interesting flight test report published in Flight International in December 1947 are summarised below:

“I was impressed by the size and somewhat brutal appearance of the power section and, in fact, of the whole aircraft.” The “clean-cut business-like appearance” of the aircraft “and its ‘office’ were confidence-producing”.

The “wide undercarriage gives a stable feel on the ground”. The stroboscopic effect of the contraprops when taxying toward the sun was most distracting. 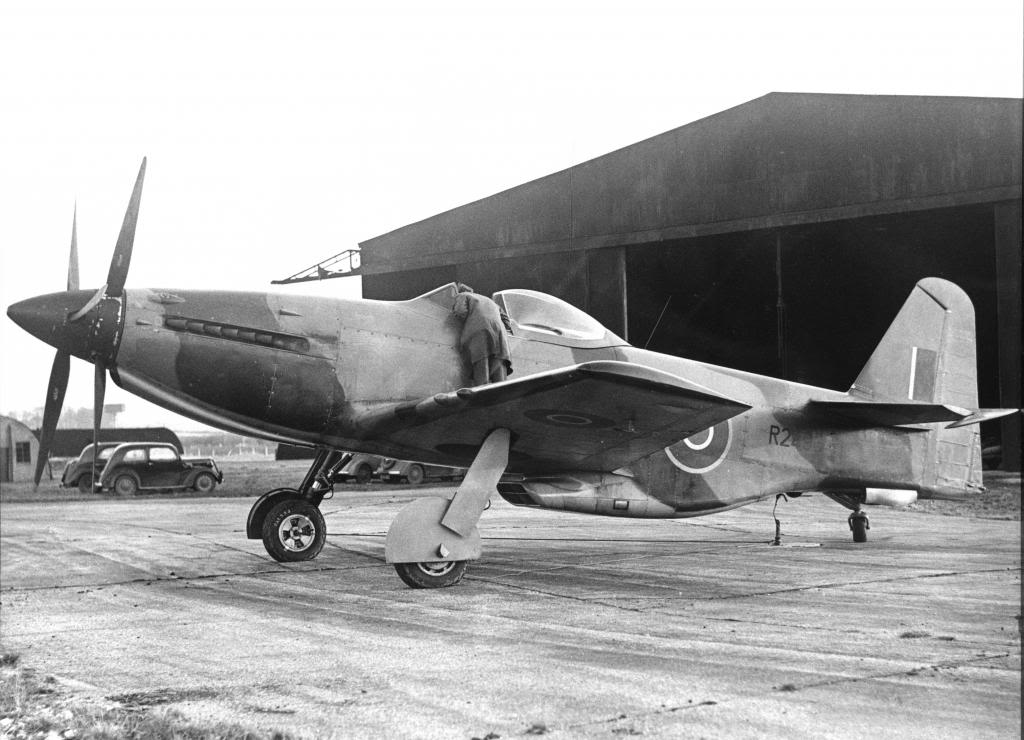 There was a tremendous response to throttle and the aircraft was delightful on take-off. The throttle was smooth and responsive, but the propeller pitch lever was rather sensitive with large response to small movement. The engine was virtually vibration-free and the noise level in the cockpit was low. The pilot cruised the MB5 at 315 mph at 8,000ft using 4lb boost and 2,250 rpm, these settings being being somewhat lower than those recommended.

The spring tab controls were said to give an air of laziness in response, their balance was commendable, but with a feeling of slight sponginess being commented on. Elevators and ailerons were “light, without being over-light, although the stick pressure required for a slow roll at about 315 mph was rather more than I had expected”.

Approaching the stall with flaps down at 3,000ft, the controls became sloppy around 110 mph, the aircraft rolling away to the left at just over 100 mph.

Approaching the airfield in a fast descent to about 1,200ft, the ASI showed about 465mph “the aircraft felt as smooth and solid as one could wish”. Putting the airscrew into fine pitch preparatory to landing “was like putting on a hand brake”.

The landing sequence was described as follows: Flaps down at 160 mph, power to adjust rate of descent. At around 130mph, the aircraft was trying to adopt the landing attitude, but still with a good forward view. Cross the hedge at around 115mph, throttle right back and flare, small attitude adjustment and the aircraft “sat down and stayed down on three points in a satisfactory manner”.

“I decided that the handling of the M-B 5 was pleasing in every way and that another hour or two on it would be a very enjoyable experience”.

The only cockpit criticisms were that “the ignition switches under the left elbow did not seem well positioned”, and that “the trim indicators were small and not too easy to read near the left hip.”

“However, in all important aspects of equipment and control, the M-B 5 definitely sets a very high standard.”

Could the Martin-Baker MB5 have been improved upon?

It seems clear that the aircraft was superlative in terms of maintenance accessibility and possessed an excellent cockpit layout, subject to the minor points noted by W/Cdr Smith in his test report for Flight International. General handling and control harmonisation was clearly very good, although both W/Cdr Smith and, apparently Eric ‘Winkle’ Brown, had some reservations about the crispness of the roll control.

Two aspects occur to me, The wing loading (wing area 262 Sq ft) was rather high at 46.1 lb/sq ft at 12,090 lb maximum weight, resulting in a stall speed close to 100 mph and possibly limiting sustained turning performance.

Given the high speeds attained, there might also be scope for the use of an improved aerofoil. The MB5 used the RAF34 wing section, which dated back to 1927, albeit with the excellent pedigree of being used on the DH88 Comet and the DH98 Mosquito.

It is interesting to speculate that one of the Hawker aerofoils used on the Tempest and Sea Fury, might have reduced the type’s drag at high speed and/or increased its critical Mach number.

So, my imagination drifts in the direction of an MB5 fuselage, powerplant and cooling system married to a Hawker Tempest V (302 sq ft) wing, or, probably better, a Fury (280 sq ft) wing (less the port wing root oil cooler).

Thank you for reading Hush-Kit. This site is in peril as it is well below its funding targets. If you’ve enjoyed an article you can donate here. A huge thank you if you have already donated and apologies for interrupting your read.