Amelia Earhart was all very well, but did she cycle the Tour de France? Amy Johnson was pretty good but did she swim the length of the Seine? Jackie Cochran achieved a lot but was she the champion precision shooter of all France? No. And how many people fly in a supersonic Voodoo jet on their 80th birthday? The remarkable story of Marie Marvingt.

La Fiancee de Danger, Marie Marvingt remains the most decorated woman in French history and one of the most remarkable people to have ever lived. Curiously, despite the greater portion of her life’s work being dedicated to using aircraft to save lives, she holds the warlike distinction of being the first woman ever to fly combat missions during a time of war.

Born in 1875, Marvingt displayed an early and remarkable talent for sports of all kinds. By the age of five she is alleged to have swum 4km in a single day, at 15 she canoed over 400km from Nancy to Koblenz and in 1905 became the first woman to swim the length of the Seine – a feat which earned her the nickname l’amphibie rouge due to the colour of her swimming costume. Not content with aquatic ventures she dominated the winter sports scene, winning prizes in ski-jumping, speed-skating, age and bobsleigh. She enjoyed mountain climbing as well as countless other sports Marvingt was also a committed cyclist, on one occasion riding from Nancy to Naples to watch the eruption of Vesuvius (a journey of over 1300km). In 1908 she attempted to enter the Tour de France but was barred as entry was open only to men, she completed the course anyway after the race had ended – notably only 36 of the 114 male riders managed to finish. Amazingly she also found time to win an international military shooting competition with a French Army carbine in 1907 as well as prizes for ballooning in 1909 and 1910 (she was the first woman to cross the Channel by balloon). So great and wide ranging were her sporting successes that the Académie des Sports awarded her a gold medal in 1910 ‘for all sports’, the only multi-discipline award they have ever presented.

By 1910 Marvingt was in possession of a driving licence (issued 1899) and a ballooning licence so a flying licence seemed the logical next step and thus by the end of the year she had qualified as France’s third female pilot, becoming the only woman to do so in the notoriously tricky-to-fly Antoinette monoplane in the process. In the years between then and the outbreak of war she flew some 900 times and not once suffered an accident, a feat more or less unheard of at that time.

It was during this period that Marvingt began to conceive of using aircraft as air ambulances, a pursuit that was to dominate the rest of her life. As early as 1912 she had worked with the talented designer Louis Becherau (who was to be responsible for the superlative SPAD series of fighters) at the Deperdussin aircraft company on the design of the first practical air ambulance. After mounting a successful campaign to raise money for the revolutionary new aircraft type, Marvingt ordered the air ambulance from Deperdussin. Unfortunately the Deperdussin company went bankrupt in 1913 and the air ambulance was never built, nor was the money ever recovered.

Within a year of this setback France found itself at war and Marvingt was determined to ‘do her bit’ even if it required disguising herself as a man. With the connivance of a sympathetic infantry lieutenant Marvingt served at the front with the 42ième Bataillon de Chasseurs à Pied as a regular (male) soldier until her subterfuge was discovered by higher authorities and she was sent home. Despite this she later accompanied Italian troops on the Dolomite front, allegedly at the direct request of Marshal Foch. Later in the war she served, in a more conventional role for the era, as a surgical nurse. Before that, however, she was to achieve the greatest single aviation milestone of her career. 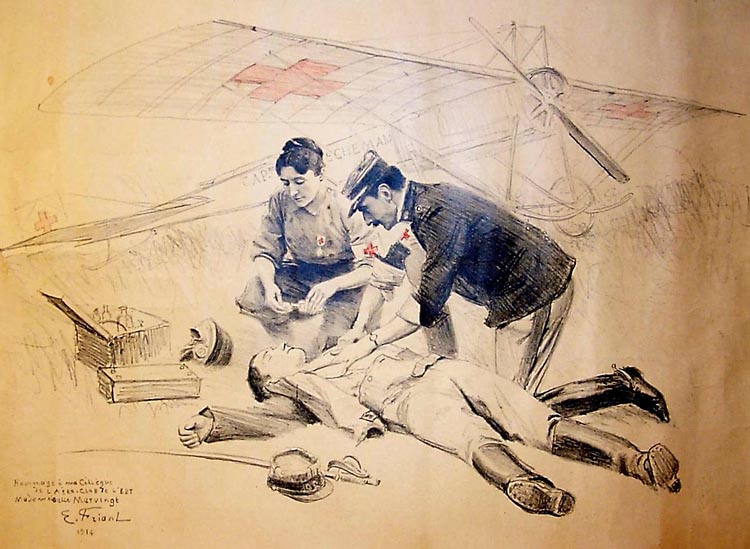 By 1915, bombing missions were becoming more commonplace but France was desperately short of trained pilots. Marie Marvingt offered her services as a volunteer and, somewhat surprisingly, was accepted. It is worth noting that in aviation circles she was a noted pre-war pilot of considerable renown and proven skill and this may have outweighed the standard contemporary prejudice of employing a woman in a combat role. Initially she flew reconnaissance missions but in 1915 she made history by flying a bombing mission over Metz (in a curious twist of fate the very town in which her parents had married 54 years earlier), becoming the first woman ever to fly a combat mission and earning herself the Croix de Guerre in the process.  To put this into context it would be, for example, another 83 years before a female pilot in the USAF was allowed to fly a bombing mission. Marvingt was so far ahead of her time that it was only in 1999 that France would present Caroline Aigle, its second woman combat pilot, with her fighter pilot’s wings.

Marvingt’s great achievement was merely a blip in her ongoing passion for aeromedical evacuation Between the wars she created a prize, the Challenge Capitaine-Écheman, for the aircraft most readily convertible into an air ambulance, co founded the organisation Les Amies De L’Aviation Sanitaire dedicated to promoting air ambulance services, established a civil air ambulance service in Morocco, became the world’s first certified Flight nurse, made two documentary films promoting air ambulances, invented metal skis and suggested their use for aircraft operating from sand, was made a Chevalier de la Légion d’honneur in 1935 was for her promotion of air ambulance services, and worked to set up the Flying Ambulance Corps which employed women pilots to deploy trained doctors and nurses by landing at designated sites or dropping them by parachute to aid the wounded. With the outbreak of a new world war this service was of obvious appeal, it had already been supported by authority figures such as Marshals Foch and Joffre in the interwar years, and in 1939 under the leadership of famous French flier, Maryse Hilsz, hundreds of volunteers sought to join. During the war Marvingt set up a convalescent centre for wounded aviators and invented a new type of surgical suture.

To celebrate her 80th birthday Marvingt flew supersonic over Nancy in a USAF F-101 Voodoo and commenced helicopter lessons (though she never attained her helicopter licence). Marie Marvingt died in 1963 at the age of 88, just two years after cycling from Nancy to Paris – a mere 350km or so.

Without the generosity of our readers we could not exist, please donate here. We are extremely grateful to all those who choose to donate. Recommended donation £11.