By the mid-1940s the limitations of piston aero engines were becoming apparent. Every possible scheme to squeeze the last bit of power from the internal combustion engine was tried. One of the most successful innovations was the contra-rotating propeller arrangement whereby two sets of propellers driven by one engine and sharing a common axis are contra-rotated (with one set travelling clockwise and the other anticlockwise).

This system, though insanely noisy, produced more thrust than an equivalent conventional arrangement. It also produced some of the most insane flying machines ever to have deafened their ground crew.

In 1945, barely three months after the piston-engined Skyraider had flown, Douglas were asked to produce a turboprop aircraft of much greater power. Though the contra-rotation system was originally developed for the piston-engine, it was with the new turboprop that it realised its potential (the first turboprop aircraft, the Trent Meteor flew the same year on 20th September). The Skyshark, finally took to the air on 26th May 1950, and a proved a marked improvement over the Skyraider: it had a 160 percent better climb rate, a 50 per cent higher service ceiling and a 170 mph faster top speed. Unfortunately development problems (centred around the engines) had so delayed the type, that it was now up against the XA-4D-1 Skyhawk, a type that was superior in almost every way (as we shall see this would not be the last time that one of Heinemann’s creations would defeat a contra’ design). The brutal Skyshark was cancelled after the sixth production aircraft was built.

First flying in 1944, the MB 5 was a superb fighter. According to master pilot Janusz Żurakowski (who demonstrated the type’s astonishing manoeuvrability at the 1946 Farnborough Airshow) it was superior in many respects to the Spitfire. The world’s most experienced test pilot Eric ‘Winkle’ Brown also commented on what a capable aircraft it was. Despite its huge potential, it didn’t enter production.

In 1950 the US Navy approached Convair and Lockheed and asked them to build tail-sitting experimental aircraft powered by the impressive (and troublesome) Allison T40. The 5,500 horsepower engines turned 16-feet co-axial propellers producing a pull that exceeded the weight of the aircraft. The aircraft demonstrated vertical take-offs (and that the US Navy were insane).

The 1943 Fisher P-75 Eagle was certainly not as impressive as its later McDonnell Douglas namesake. Testing revealed several issues with this powerful (but mediocre) fighter including: miscalculated centre of mass; dismal engine performance from the Allison V-3420 engine; high aileron forces at high speed, and poor spin characteristics. Everything the Allison V-3420 touched turned to shit as all the types fitted with it (the Douglas XB-19, Boeing XB-39 Superfortress, Lockheed XP-58 Chain Lightning) failed to enter service.

The post-war Wyvern was a single-seat carried-based fighter powered by a turboprop engine. As Ed Ward pointed out, it was, “650 pounds shy of a loaded Dakota”. Unsurprisingly, of the 127 that entered service with the Fleet Air Arm, 39 were lost despite a service life of only five years.

Fairey’s seeming battle with Westland to produce the ugliest aircraft was won outright when the Gannet prototype took to the air in 1949. On 19 June 1950 it became the first turboprop aircraft to make a deck landing on an aircraft carrier.  Not put off by the type’s hideous appearance it received export orders from the German Marineflieger, the Indonesian Navy and the Australian Fleet Air Arm. 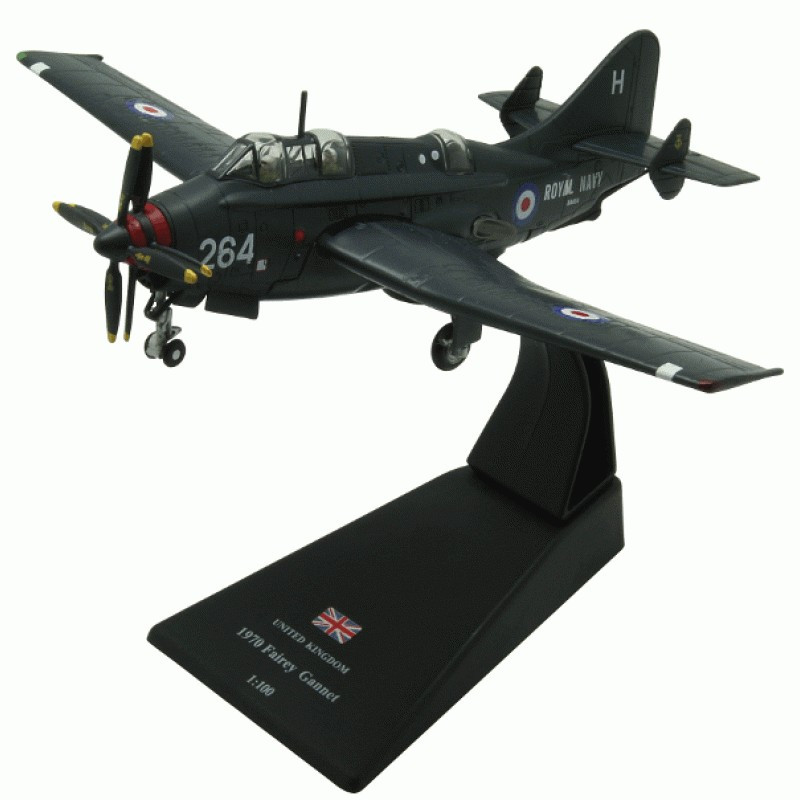 Have a look at this fab model here

In original purpose, the Tupolev Tu-95 is closely analogous to the US B-52 with the minor discrepancy in the direction the atomic attacks would culminate. Whereas the US opted for jet engines for the B-52, Tupolev decided that turboprops were the preferable solution. The 14,800 shift horsepower Kuzetsov NK12 is the most powerful turboprop that has ever entered production (the Tu-95 has around twelve times more engine power than a Lancaster bomber). The result was one, if not the, fastest propeller-powered aircraft ever to fly. This superb design remains in service a staggering sixty two years after it first flew. It spawned several other family members – the Tu-114 and Tu-116 airliners, the Tu-126 AWACS and the Tu-142 maritime patrol aircraft.

The Tu-91 was planned to service a new Soviet carrier force in a similar way to the FAA’s Wyvern. It performed well in tests, and when the carrier plan was scuppered, it was developed as a land-based aircraft. However it was cancelled in this role, the apocryphal reason being that Khrushchev found the notion of a new propeller-powered warplane untenable.

The Super Savage competed with the jet-powered Douglas XA3D to become the new twin-engined attack aircraft for the US Navy. Unfortunately for the North American, development of the rival XA3D was being supervised by Ed Heinemenn, an unbeatable aircraft designer. The Super Savage was greatly inferior to the XA36D and lost the contest. The winner became the superb A-3 Skywarrior.

If war between the Warsaw Pact nations and NATO had broken out in the late 1980s Soviet Su-27s would have been given the rather unsporting task of shooting down an aircraft that was essentially a World War II bomber. The popular idea that the Shackleton was based on the Lincoln bomber is misleading, the fuselage was a clean sheet of paper design and the aircraft inherited some features from both the Lincoln and the Tudor airliner, but the basic configuration could be traced back as far as the Manchester. The maiden flight of the Shackleton was 9th March 1949, a mere eleven days before the first flight of the Wyvern. Originally a maritime patrol aircraft, (capable of deploying nuclear depth charges) it continued life as an airborne early warning aircraft. In this role it served well into senility despite being equipped with a late -1940s technology radar (partly because of the failure of the Nimrod AEW.Mk 3). In the 1970s individual Shackletons were given name from popular children’s TV shows (The Magic Roundabout and The Herbs). Despite, or more probably because of its anachronistic survival into the 1980s it was loved by many (though generally not the aircrew). The type was retired in 1990.

Northrop seems to have designed aircraft on the principal of providing the juiciest inspiration to the vehicle and set teams of future steampunk films. Whereas most aircraft designers of the 1940s looked to aluminium as their primary metal, something about magnesium attracted mavericks. In several cases, these non-conformists were also drawn to the ‘pusher configuration’. In 1943 US aero-giant Northrop flew the XP-56 Black Bullet, it looked like nothing else and was the probably the most bizarre American aircraft produced during World War II. The bat-winged fighter was an extremely unorthodox design and was probably the first ‘Magnesium pusher’. However, the type proved dangerous to fly and delays in its testing saw this piston-engined aircraft fall out of favour, by now it was the dawn of the jet age. Somebody at Northrop clearly thought the XP-56 was not mad enough and began work on the lunatic XP-79, schemed a rocket-propelled fighter built to destroy enemy aircraft by physically ramming them. Again, this was a largely magnesium construction.

The remarkable XB-42 was in many ways the most advanced piston-engined warplane ever flown. As René J. Francillon put it, “the XB-42 was as fast as the Mosquito B.XVI but carried twice the maximum bomb load…furthermore the Mixmaster had a defensive armament of four 0.50-in machine-guns in two remotely-controlled turrets whereas the Mosquito B.XVI was unarmed.” A variety of offensive gun options were considered including sixteen .50 cals or two 37-mm cannons. The XB-42A had a top speed of 488 mph and a maximum range of 4,750 miles.