“You should not be at all surprised if someday you see me fly from New York to Colorado Springs in a contrivance which will resemble a gas stove and weigh almost as much.” said charismatic but unlucky Serbian-born Nikola Tesla in 1913. The inventor of Alternating Current and precursive David Bowie impersonator is not such an an obscure figure these days in the world of science in general but his admittedly minor contribution to the field of aeronautics remains little-known.

In 1928 Tesla filed a patent (coincidentally his last) describing a vertical take-off machine with a tilt wing/rotor that was at once both astonishingly prescient and maddeningly naive. This V-22 Osprey precursor was to be powered by a turbine engine, which was well beyond the state of the art in the 1920s (Frank Whittle patented the gas turbine engine in 1930). However, although the aeroplane aspects of its design are fairly reasonable, the rotary wing aspects are less impressive. Torque is helpfully cancelled out by having the lift rotors/propellors rotate in opposite directions but it is unclear how the aircraft would be controlled in vertical flight and the rotors are clearly far too small to support the machine in the vertical plane. Nonetheless this is the first known iteration of the tilt-rotor concept to be patented and as such is the precursor of all those bizarre ‘fifties VTOL prototypes that never quite worked properly but looked amazing before they crashed somewhere.

‘Bizarre’ is also a word that could be reasonably applied to some of Tesla’s obsessions and habits. Clearly (to a modern audience) suffering from some form of OCD, Tesla’s eccentricities were not as horrific as Howard Hughes’s – no unsnipped fingernails or jars of urine for Nikola – but were sufficiently unusual to garner the attention of society at a time when mental illnesses were poorly understood at best. Passed off as eccentricities by his friends, these traits were used to ridicule poor Tesla by his enemies who insinuated he was totally insane. And there was a history of mental illness in his family – Tesla’s father was afflicted with multiple personality disorder and was known to engage in heated arguments with different versions of himself. His brother meanwhile suffered from violent hallucinations.

Like many who suffer from obsessive compulsive behaviours, Tesla was devoted to cleanliness. He would not consume anything that had not been sterilised or boiled. For this, at least, he had an explanation: after seeing bacteria in his drinking water through a microscope he said, “if you would only watch for a few minutes the horrible creatures, you would never again drink a drop of unboiled or unsterilized water.” In similar vein he would regularly refuse to shake hands and often wore gloves to avoid physical contact. 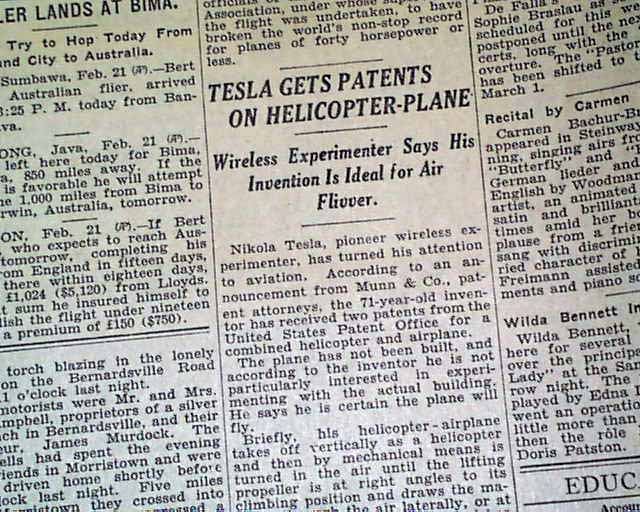 So far so obsessive compulsive, Tesla’s relationship with the number three is somewhat stranger. It is not known how or why he developed this strange obsession but he would often engage in rituals that involved the number three, including his practice of walking three times around a building before entering it. When dining he would fold 18 napkins before he started eating because 18 was divisible by three. When he stayed at a hotel, he would request that his room number was a multiple of three and specified that 18 fresh towels were to his room be delivered every morning. In addition to boiling all of his food, he would also determine the volume of the food on his plate, and then calculate the number of jaw movements required to consume it. Apparently he had a profound phobia of round objects, and refused to remain in the company of a woman who was wearing earrings. Curiously there is a widespread suggestion that Tesla designed a flying saucer aircraft, however given his problem with round items this would, one assumes, be the last shape he would consider unless through absolute necessity.

Unlike insanely wealthy OCD sufferer Howard Hughes, Tesla died penniless but not, at least, a filthy, morphine addicted recluse surrounded by jars of his own piss. At least Tesla is now being rediscovered as a scientific and cultural figure, not least through the efforts of Elon Musk. It is presumably not a coincidence that the modern Tesla car company’s only vehicle with a numeric model designation is, of course, the Model 3.