As soon as a new piece of technology comes along, people start portraying it in art, and the 20th century brought few greater gifts to the artistic world than the aeroplane. Small wonder the fighter plane has been immortalised in every medium from pencil to bronze.

Early aircraft were novel eccentricities, with huge comic potential, but were also very likely to kill pilots and passengers. We responded as humans always respond to the strange and scary: by drawing cartoons of it, alongside the sketches and photographs of gallant record-breakers. 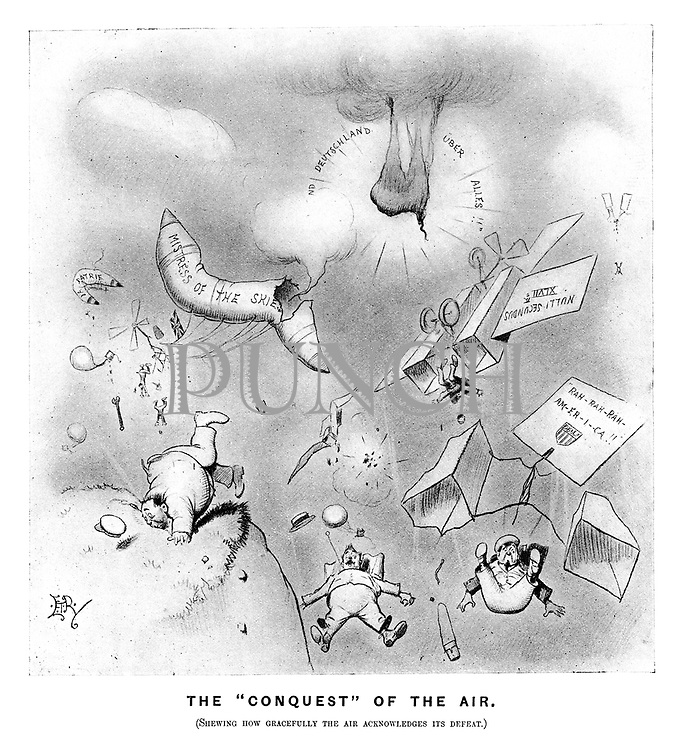 The First World War changed the aeroplane from a harmless toy to a terrifying bringer of death from above, bombing and strafing soldiers, civilians and property. Airmen joined soldiers and sailors on propaganda material, while war artists depicted the hurly-burly of dogfights, but also captured the strange peace and beauty found on reconnaissance and spotting flights high above the action.

A good effort by the creator of this recruitment poster, who clearly has no idea how to aeroplane but does an excellent job of portraying the relief and gratitude felt by German pilots at being slain by noble British airmen. 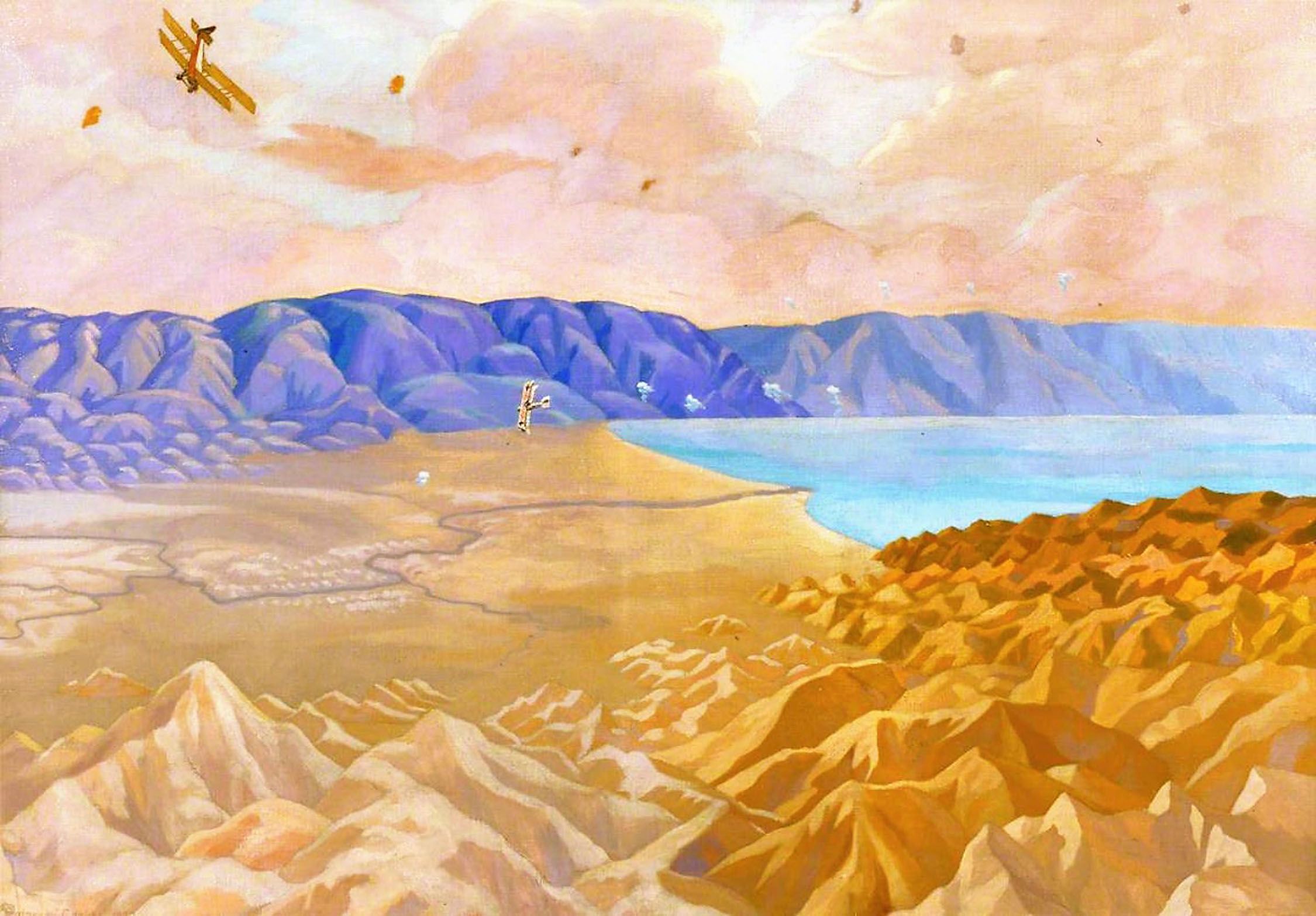 The Dead Sea: An Enemy Aeroplane over the Dead Sea, Palestine – Sydney Carline

Sydney Carline was a Sopwith Camel pilot before becoming an official war artist in 1918, documenting the air war in the Middle East and on the Italian front alongside his younger brother Richard. Also an artist, and also a member of the Royal Flying Corps, Richard was tasked with painting camouflage designs before he joined Sydney in producing luminous, Cubist-inspired aerial views.

Between the wars, as Italy stepped up its efforts to become the most modern and forward-looking country in Europe, the Futurist movement embraced the aeroplane. Futurists rejected the old and celebrated the new. Aviation fitted in not only with the movement’s love of clean lines, speed and modernity, but offered an entirely novel, aerial perspective on the world, with all the artistic possibilities that unlocked.

Aviation spawned its own Futurist mini-movement, Aeropainting, or aeropittura in its native tongue. In 1929, a group of nine artists signed the Aeropainting Manifesto, committing to paper the feeling that:

“The changing perspectives of flight constitute an absolutely new reality, one that has nothing in common with the reality traditionally constituted by earthbound perspectives.”

It’s worth mentioning, given the often masculine to the point of misogynist nature of Futurism, that one of the Manifesto signatories was a woman, Benedetta Cappa.

The aeropaintings of Enrico Prampolini, Tullio Crali and Giulio D’Anna convey the essence of aviation in geometric shapes. Curves suggest propellers in motion, while an aeroplane can be reduced to a blocky cross yet still retain a sense of grace and movement. Landscapes and city streets are simplified to reflect the view at speed from on high.

As the 1930s rolled on, Futurism, with its taste for vehicles, weapons and the mechanical, became more than a little bit Fascisty, with Mussolini rearing an abstracted depiction of his head amongst the bird’s-eye landscapes. Although the Aeropainting movement did not last, Tullio Crali, at least, retained his love of aviation, and in the 1980s produced a series of paintings celebrating Frecce Tricolori, the Italian national display team.

In the Second World War, official war artists were employed from the start, recording all aspects of life and death on the front line and at home. Established names like Paul Nash, Eric Ravilious and Edward Ardizzone committed their impressions of the air war to canvas.

One of the most striking pieces to come out of the era is Nash’s Battle of Britain. More than two metres wide, it’s a vast, operatic scene depicting an air battle over the mouth of a river. Dozens of planes are involved: some engaged in a dogfight, some trailing smoke as they plummet down, while fresh enemy fighters arrive in a menacing formation to join the chaos in the sky.

Eric Ravilious’s planes look peaceful by comparison. Lovingly shaded in watercolours, they have a nostalgic glow that wouldn’t be out of place on a birthday card for an elderly relative, even though the weaponry they portray was very contemporary and deadly (Ravilious was listed as missing in action in 1942, when the aircraft in which he was travelling failed to return from a mission over Iceland).

Aircraft aren’t always remote and above it all: in scenes portraying factories and repair depots, operations rooms, and pilots waiting for the order to scramble, men and women are shown purposeful and absorbed.

Meanwhile in the USA, lest you think this is all far too literal and insufficiently avant garde, Man Ray took an exposure of toy planes on photographic paper to create [Airplane shapes] (1945), thought to represent a coming airborne Allied victory. 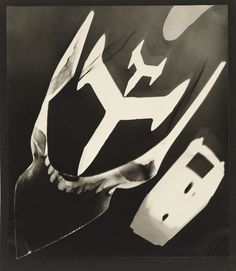 The 1950s and onward brought beautiful, graceful aircraft designs, as form allied with function to break the sound barrier and the world looked forward to a peaceful future of space exploration and luxury travel. Oh—there were some wars, too.

Enter probably the most famous fighter aircraft in art: the star of Roy Liechtenstein’s Whaam!, his vast 1963 piece that spreads a dogfight over Korea across two panels of primary colours and Ben-Day dots. Inspired by the artwork in kids’ comic All-American Men of War,

Liechtenstein’s collection of war comics must have been well-thumbed. Other works in his oeuvre that drew on rip-roaring aviation action include the onomatopoeic Blam!, Brattata and, confusingly, Bratatat!, as well as Okay, Hotshot, Okay, Live Ammo (Ha! Ha! Ha!) and Tex. (It was Live Ammo, incidentally, that sparked my lifelong interest in Pop Art.)

Aeroplanes in art can symbolise war and death, but also hope, and a sense of rising above chaos to the peace and beauty of the heavens. From the shortbread-tin image of a shorts-clad schoolboy waving at a Spitfire to Liechtenstein’s cartoony destruction, the machine breaking the bonds of gravity speaks to us of freedom and our ability to curtail that freedom.

Tullio Crali: A Futurist Life at the Estorick Collection, London until 11 April 2020
https://www.estorickcollection.com/exhibitions/tullio-crali-a-futurist-life

In Air and Fire: War Artists, the Battle of Britain and the Blitz at the Royal Air Force Museum, London from 27 March 2020 until 28 March 2021

Sadly, we are again way behind our funding targets. This site is entirely funded by donations from people like you. We have no pay wall, adverts (any adverts you see on this page are not from us) or subscription and want to keep it that way– please donate here to keep this site going. You can really help.