The AH-64 was not supposed to be a close air support platform. Designed to employ its three weapon systems against enemy tanks from a hover and then move from battle position to battle position flying at treetop height, the Apache was a tank killer from its inception. Two major events in 1972 directly influenced the mission set for the concept that would evolve into the Apache. The April 1972 Battle of An Loc saw High Explosive Anti-Tank (HEAT) rocket-armed AH-1G Cobras and TOW missile-armed NUH-
1Bs destroy numerous tanks, blunting the North Vietnamese invasion. While the majority of the actions fought during An Loc were classic Close Air Support missions over friendly troops in contact, the Army focused on the attack helicopter’s successes killing tanks, and the rest as they say, is history. The cancellation of the AH-56 Cheyenne programme in August 1972 was the other. The Cheyenne was designed as a CAS platform from the beginning to support troops on the ground. Able to carry eight 19-
shot rocket pods or a mix of rockets and TOW missiles; and mounting two turreted weapons, a single Cheyenne carried more than twice the combat load of the AH-1G. But the Cheyenne’s technology was not yet mature, and after several years of delays and reduced interest by the Army, the program was cancelled with only ten aircraft built.
The day after Cheyenne’s cancellation, the Army initiated the Advanced Attack Helicopter programme, which would yield the AH-64 just a few years later. Gone was the primary requirement for supporting troops on the ground, and instead, the helicopter was built around the new anti-tank missile; the AGM- 114 Hellfire and designed as a tank killer. The Apache was to be the great equaliser, protecting the Fulda Gap from the Soviet armoured hordes invading Western Europe in a future World War III. It was to
sit at a hover, moving from battle position to battle position, unleashing Hellfires at maximum range and reducing Soviet tank numbers before they got within range of friendly armour. Surprisingly, the Apache’s 1989 combat debut in Panama was as a fire support platform, where its Night Vision System was a key asset in targeting Panamanian resistance and directing troops on the ground.

Lieutenant General Carl Steiner, Commander of XVIII Airborne Corps during Just Cause praised the AH- 64s capabilities by saying it could “Fire a hellfire missile through a window at five miles away, at night”. The ability to precisely engage such a small target from miles away was designed to be effective against tanks, but served the AH-64A well in Operation Desert Storm in January 1991 when AH-64As of 1-101st Aviation Regiment, destroyed several key antiaircraft radar stations along the Iraq-Kuwait border,
knocking out a 20-mile wide portion of the Iraqi early warning Air Defense network and opening the door for coalition air assets to begin striking targets inside Iraq. Apache battalions acquitted themselves well during the short conflict, performing battlefield interdiction missions well forward of the rapidly shrinking front lines, destroying over 500 tanks and hundreds of other vehicles before the cessation of hostilities.

However, as with most combat aircraft, the Apache’s three decades in service have seen its role evolve with the conflicts in which it has participated and its mission capabilities mature. In the aftermath of 9/11, Apaches deployed to Afghanistan to combat Al Qaeda and Taliban forces, where the armour threat was minimal. It was there that the AH-64 returned to the attack helicopter’s roots as a Close Air Support platform.

The operational environment in Afghanistan is harsh. Taliban and Al Qaeda forces are not the pilots’ only concerns, as high altitude and high temperature can have more of an adverse effect on helicopter performance than enemy fire. The hover fire tactics that Apache pilots had trained on since the type went operational in 1984 were not possible in hot/high conditions and pilots were forced to resort to the running/diving fire techniques perfected by their Cobra pilot brethren a generation earlier.

These fast moving techniques allowed better freedom of movement and coordination with troops on the ground, and became the standard for Apache operations in Afghanistan. The following year saw the invasion of Iraq and the combat debut of the AH-64D, which brought the Apache into the digital age and increased its ability to conduct the CAS mission even further. 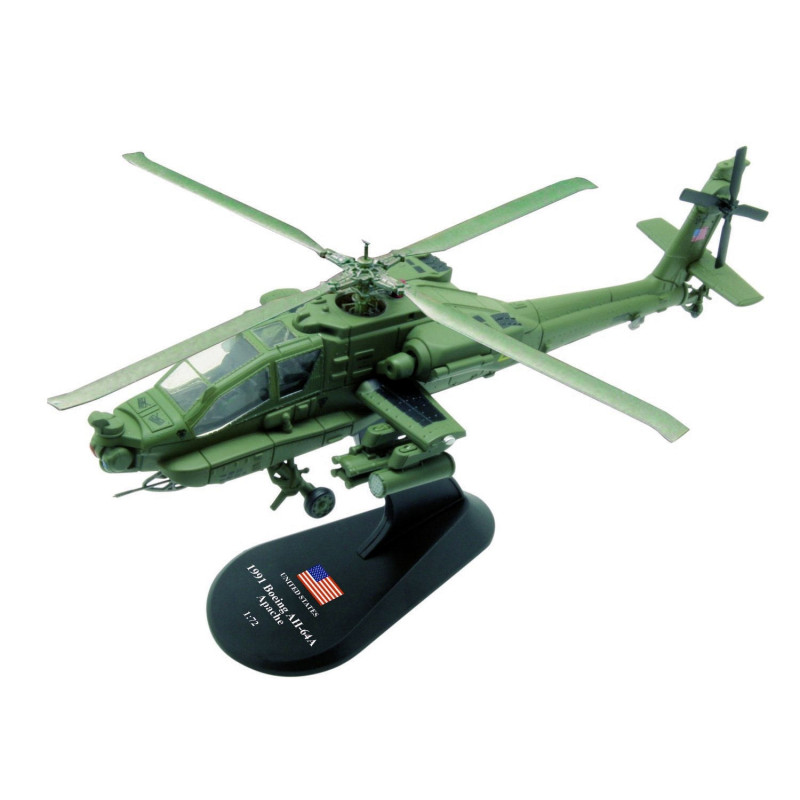 Check out this fab model here

The Longbow Apache’s digital cockpit greatly enhanced situational awareness for both crewmembers, and the introduction of the AGM-114L Longbow Hellfire allowed crews to attack targets that were blocked by smoke or other obscurant that the helicopter’s laser designator could not penetrate. Now troops on the ground only needed to pass along a GPS grid coordinate to the Apache crew, and the Longbow Hellfire could be fired right at those coordinates. The first Longbow Hellfire used in combat was fired against an Iraqi T-72, but many more would be fired at a multitude of targets in the first weeks of the invasion of Iraq.

The operational environments in Afghanistan and Iraq forced a return to providing close support (now called Close Combat Attack by the Army) to troops on the ground. They became so effective that enemy combatants often refused to engage US forces if Apaches were in the area. New versions of the Hellfire like the AGM-114N thermobaric Hellfire were ideal for taking out caves or buildings with minimal collateral damage. The night vision system was updated in 2008 with the addition of the Modernized Target Acquisition/Designation Sight and Arrowhead Pilot’s Night Vision System, allowing unprecedented image clarity from miles away in complete darkness. In 2010, the capability to receive UAV video feed was incorporated into the Apache’s repertoire, even further increasing the coordination between the helicopter and the troops it supports. Lastly, in 2012 the adoption of the Advanced Precision Kill Weapon System turned the standard Hydra 70 rocket family into precision guided munitions and boosting the Apache’s lethality against precision targets. The ideal melding of evolving sensors, weapons and techniques have evolved the Apache into not only the world’s premiere attack helicopter, but the premiere Close Combat Attack platform in the world. Operational necessity brought the AH-64 back to the role it was destined to fill, even though shortsightedness initially overlooked that role.

Only one day to go….Sadly, this site will pause operations in December if it does not hit its funding targets. If you’ve enjoyed an article you can donate here.