When the F-15 Eagle entered production, Nixon was in office. Now, 47 years later, it is still in production, and in 2019 the United States Air Force requested a radically modernised version, the F-15EX. The reason for its longevity? The Eagle can do almost anything that is asked of it. 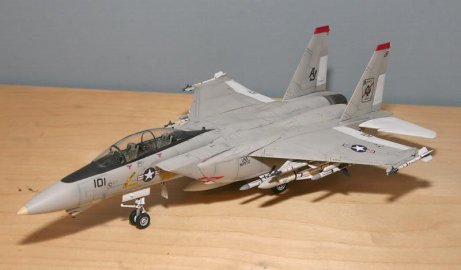 The effort to replace the F-4 Phantom II in US Navy service had been tortuous. The overweight overly-complex F-111B failed, and in the early 70s its successor the nascent F-14 was also struggling. McDonnell Douglas stepped in offering the F-15N, based on their yet-to-fly F-15A. It had much going for it, being a simpler design than the F-14, with better engines. However, adding a heavy naval landing gear, folding wings for deck stowage and the hugely complicated AWG-9/AIM-54 weapon system — an extremely long range radar/missile combo — would have added so much weight and involved so much work it would have mitigated any advantages the Sea Eagle might have enjoyed. McDonnell Douglas then proposed dumping the AN/AWG-9 radar in exchange for a modified version of the Eagle AN/APG-63 radar adjusted to work with the Phoenix, but the Navy preferred to soldier on with the Tomcat. Had the Sea Eagle succeeded, Top Gun would have been a film about Eagles. That the Russians and Chinese have subsequently successfully adapted the ‘Flanker’ to carrier life is evidence that the Sea Eagle concept was not crazy.

We asked an F-15 pilot how confident he would be going against a Flanker, his answer here:

In 1975 the US wanted to show off what the new F-15 could do, so they set about creating an especially fast Eagle to break world records and garner global exposure. Now they didn’t exactly cheat, but the machine — the Streak Eagle — was considerably lighter than an operational aircraft. 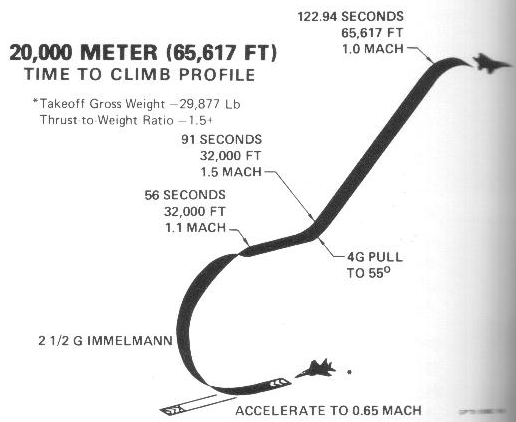 Every possible act of weight reduction took place — the following were all removed: the flap and speed brake actuators, the M61A1 Vulcan 20-mm cannon and its associated systems, one generator, the radar and fire control systems, most of the cockpit displays — even the radios and the paint! And though special measuring equipment was added the aircraft was still extremely light. It had shed approximately 1,800 pounds (817 kilograms), giving it a monstrous thrust-to-weight ratio of 1.4:1. The Streak Eagle succeeded in shattering a series of world records.

The F-15 is the only fighter to have shot down a satellite, something it did in 1985. The weapon for this test was the ASM-135 ASAT designed to destroy Soviet communications-, spy-  and ‘killer’ satellites. To launch the weapon required the specially modified F-15 to climb to 80,000ft, an extreme altitude unachievable in most other aircraft. The United States Air Force wanted 20 F-15A fighters and 112 missiles for the mission and had begun to modify the fleet when ASAT was axed.  It was cancelled for several reasons, including rising costs, international laws intended to limit space warfare and fears that the destruction of multiple satellites could lead to a belt of orbiting debris that could potentially destroy everything else in orbit.

The F-15 Short Takeoff and Landing and Maneuver Technology Demonstrator 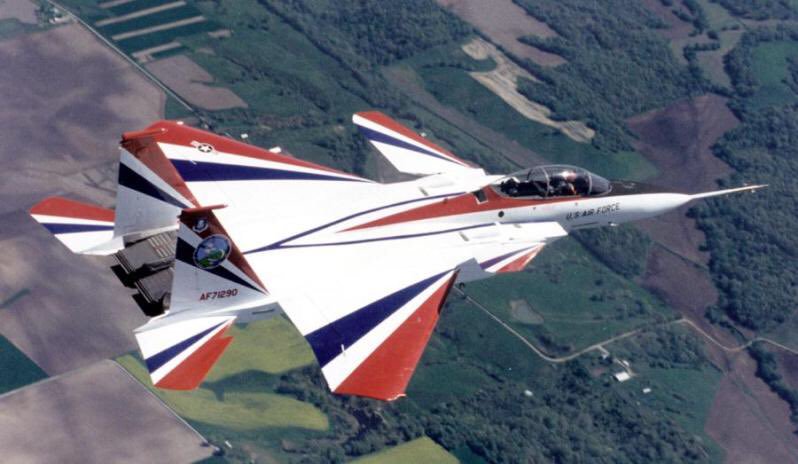 In 1984 McDonnell Douglas was tasked with a creating an experimental aircraft that could “land and take-off from sections of wet, bomb-damaged runway under bad weather conditions and severe crosswinds without active ground-based navigational assistance.”  NASA had been studying the idea of fitting thrust vectoring nozzles to the F-15 since the 1970s, and this new test machine (an adapted F-15B) – fitted with canard foreplanes-  was dubbed the F-15STOL/MTD. It was first flown with the low-observable thrust-vectoring nozzles in 1989 and the results were remarkable, according to NASA, “Test flights demonstrated a 25-percent reduction in takeoff roll, and the thrust-reversing feature made it possible for the F-15 to land on just 1,650 ft of runway… In addition, thrust reversal was used during up-and away flight to produce rapid decelerations—a useful feature for close-in air-to-air combat. During the flight program, the F-15 STOL/MTD made vectored takeoffs with rotation demonstrated at speeds as low as 42 mph. The program ended on August 15, 1991, after accomplishing all of the flight objectives.”

Rarely discussed but equally amazing- “The most impressive research results in flight dynamics, however, occurred when the Langley researchers equipped the free-flight model with special 2-D nozzles that provided thrust vectoring in yaw as well as pitch. The superior control provided by the multiaxis vectoring was demonstrated when the model was easily flown at angles of attack up to about 85 deg without vertical-tail surfaces.”

In 1993, the  STOL/MTD left USAF and was acquired by NASA, which renamed it the F-15 ACTIVE (Advanced Control Technology for Integrated VEhicles). NASA used the ACTIVE to test several things, including testing new round 3D thrust vectorers. These could support up to 20 degrees of thrust vectoring in any direction. These nozzles were mounted to stock F100-229 engines and were barely heavier than the standard nozzles. The project bears interesting comparison with the Russian Sukhoi ‘Flankers’ that have entered service with 3D vectored thrust nozzles (some of which also have canard foreplanes).

Later in life, the ACTIVE was used to test the next-generation of flight control systems, with the ‘Terminator-like’ ability to learn and analyse the flight properties of the aircraft. In theory, these would allow a pilot to control the aircraft during an emergency by customising thrust vectoring and control surfaces to compensate for specific unpredicted battle damage. The aircraft would be flying in a way it had not flown before, adapting to conditions as they happened.

The aircraft was finally retired on January 30, 2009. During its service it had tested propulsion and flight control systems as well as high altitude sensors and communication equipment. It made a major contribution to advanced tactical fighter research. 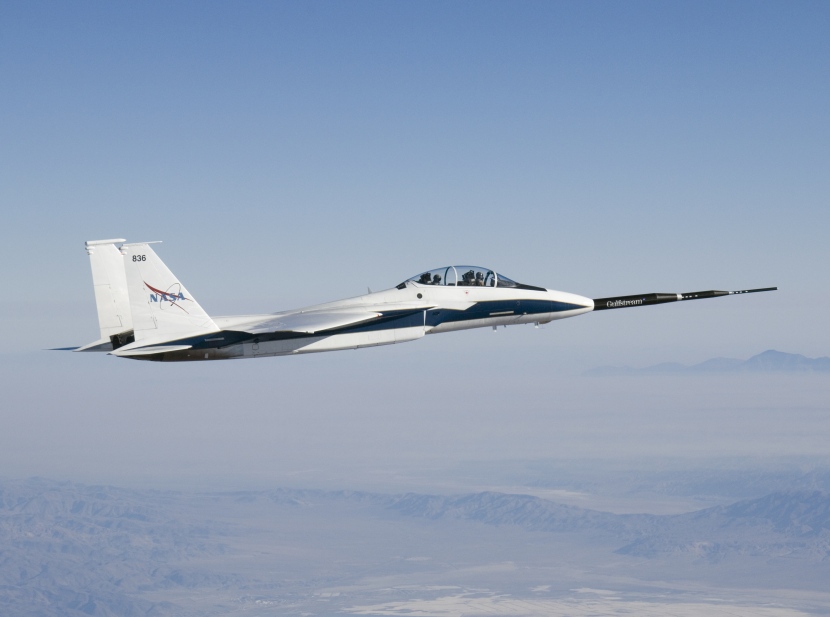 Supersonic flight is largely banned over land as the ‘sonic boom’ produced by an aircraft breaking the sound barrier is loud and potentially destructive. This –somewhat controversial – limitation severely limited Concorde’s success. Gulfstream Aerospace want to bring back supersonic air travel but believe the only way to do this is to make it quieter. They thus teamed with NASA to work on a way to acoustically shape the sonic booms to reduce the noise. The idea was to shape the shock waves with a huge retractable boom on the nose of an aircraft. To test the plausibility of this, a NASA F-15B was selected modified with the semi-retractable ‘spike’ and flew 50 flights from 2006 to 2007. How well this is worked is unclear: a 2013 statement by Gulfstream noted supersonic air travel was still unlikely unless the boom could be reduced. Two x-planes will continue research in this field – the Gulfstream X-54 and the Lockheed Martin Lockheed Martin X-59 QueSST.

Stealth fighters that must carry their weapons internally, like the F-22, do not have enough missiles to fully exploit their potential. One solution to this is for stealth aircraft to work in conjunction with conventional fighters with large weapon loads. The 2040C, proposed by Boeing in 2017, demonstrates this idea taken to an extreme boasting the ability to carry sixteen air-to-air missiles. The aircraft would communicate to Raptors via the cutely named Talon HATE communications pods.

When Boeing started publicising the F-15 Silent Eagle in 2009 it was considered by many as a joke – a ‘stealthy’ version of the notoriously radar conspicuous F-15 seemed hard to take seriously. As did the idea that adding a ton of RCS measures including canted vertical fins, new electronics, an internal weapons bay, the addition of a great deal of advanced Radar Absorbent Material to an aircraft without a USAF order would actually end up being any cheaper than the F-35 it was supposed to counter on price. The world agreed, and despite some interest from Israel and South Korea (who were scared of its potential cost and preferred a less radical Eagle) – no orders have transpired. The project was not a waste of time though – Boeing’s continued aggressive push of the Eagle resulted in new advanced variants and a very significant order by USAF for the F-15X.