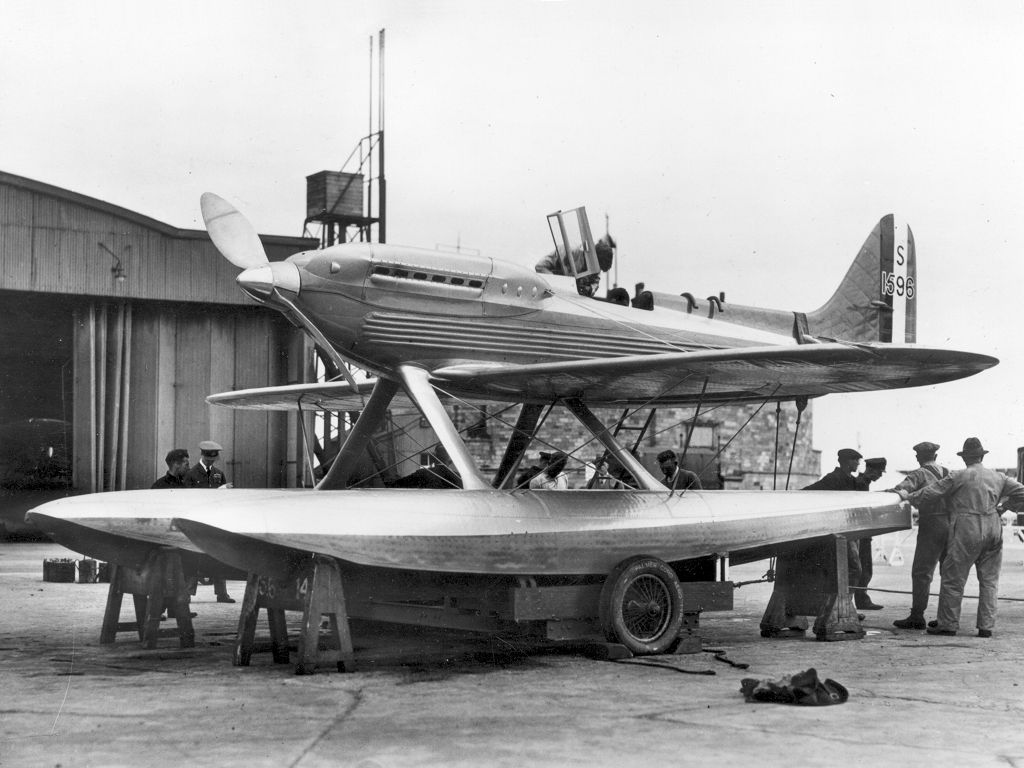 Aeroplanes never got more beautiful than the heroic entrants of the Schneider Trophy contests of the ’20s and ’30s. Murder to fly, the greatest of these unforgiving overpowered brutes was the S6 designed by R.J. Mitchell, father of the Spitfire. We consider what an even greater racer from Mitchell might have looked like.

I suspect I am not alone in having a fascination with every aspect of aviation, but within that there being a few areas of particular interest. Top of the pile for me is the Schneider Trophy, very specifically the last two races in 1929 and 1931. The reason is probably because these aircraft represent the ultimate combination of Art Deco (another passion of mine) and high speed. As always with these things, look deeper into the rabbit hole and you tend to find more to draw you in. 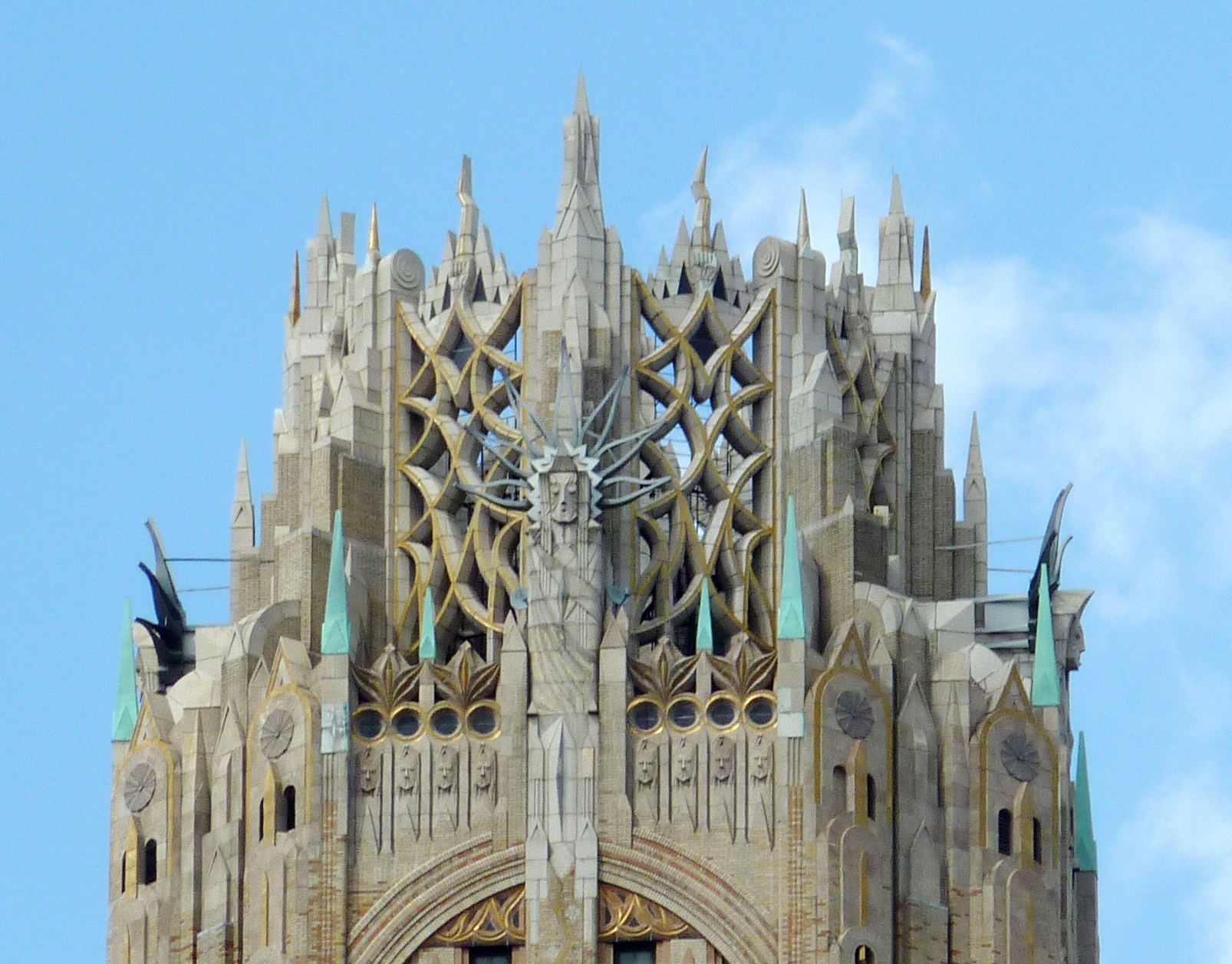 An example of Art Deco architecture, the Crown of the General Electric Building  (1933)

So it was that, whilst discussing details of the S6 online with a well known author, the speculative question “If he’d had funding immediately after the race in ’29, what could Mitchell have produced?” was brought up. An ‘S7’ as it were.  Having a little knowledge and a vivid imagination I thought I’d try to provide an answer – or at least a plausible starting point for further discussion. 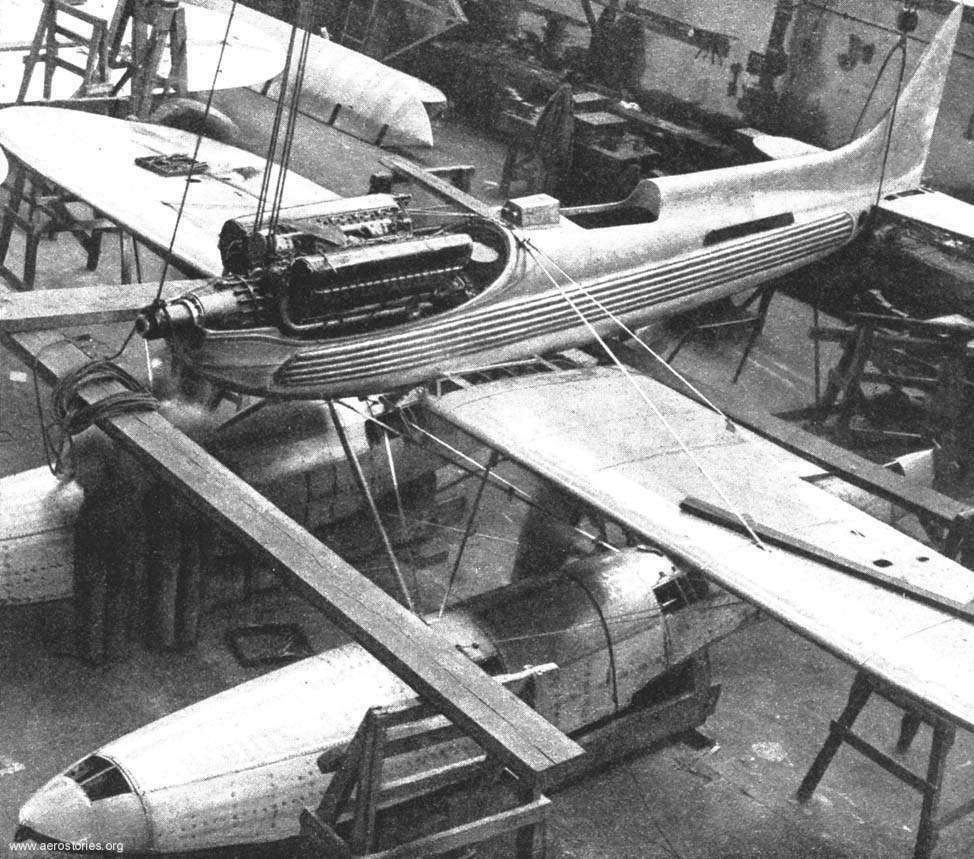 There is a clear linear development from the Supermarine S4, through the S5 and S6 (in its various guises) to the Spitfire. Bar the S6-esque cowling, the Type 244 ‘original Spitfire’ was so far removed from this line that I think it can be seen as an aberration. Of course the Spitfire itself was built for a different role but it is still a high performance single seat monoplane. Given all this I think its fair to assume that both Mitchell and Rolls Royce would have continued along the path of refinement and evolution rather than resorting to radical revolution. So I find my start point and from here we can discount Fiat’s route of bolting two engines together for the Macchi M.C.72, retractable floats,  hydroplanes or other similar wildcard solutions. Moving from what inhabits the realms outside of what can be considered I think the probable basic lines of development can be split into four areas:

Power: The S5 had a Napier Lion 12 cylinder motor that was giving just shy of 1300 BHP by 1929. For the S6 Rolls Royce produced the “R” which started out at about 1900 BHP and got up to 2800 in record trim by 1931. An impressive development on the edge of the technological limits of the day and, I suspect, as far as they could go with it. Given the principle of building on what was known I could see Rolls Royce producing a “Super R” through either scaling up the basic design to increase capacity or adding more cylinders to turn it into a V16. The automotive world was already working on this configuration at the time and its inherent balance would have been a bonus. Either way this would have resulted in a longer and heavier engine, moving the aircraft centre of gravity forwards but by return giving more power. The requirement to keep it cool, already marginal with the S6, would of course be made even worse. 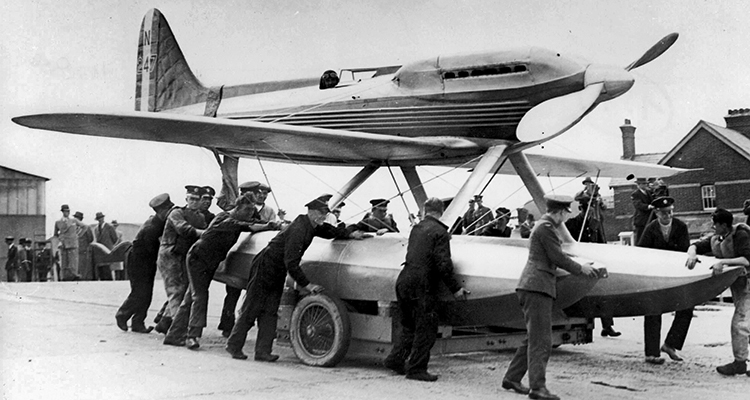 Control: Control issues are a constant problem with building extreme high performance aircraft. With the S6 the take off was fraught because of torque reaction digging one float in and causing an uncontrollable yaw during the early stages, transitioning to a desperate clawing into the air with  the control column pulled fully back as she unstuck. The super-coarse pitch of the Fairey-Reed propeller was needed to get the top speed but it was, by default, operating at its very lowest performance envelope during this phase of the flight. From this I think that a variable pitch prop would have had to be looked at to deal with an increased problem due to the greater power.

RJ Mitchell’s work on racers informed his creation of the Spitfire.

A fully variable system was patented in 1924 so, although uncommon, it was not new by 1929. A more robust solution may have been to adopt a pre-set system similar to that used on the DH88 Comet of  1934. In this a small flat disc protrudes in front of the spinner and, once a set speed is reach, it pushes back and coarsens the pitch of the blades. It can only be reset once the engine is off and the aircraft has returned to land (or water) but this isn’t an issue for a racing aircraft. The biggest area of concern with the handling characteristics in flight were down to the centre of gravity being too far back, causing pitch changes at speed. The larger engine would at least help negate some of this. 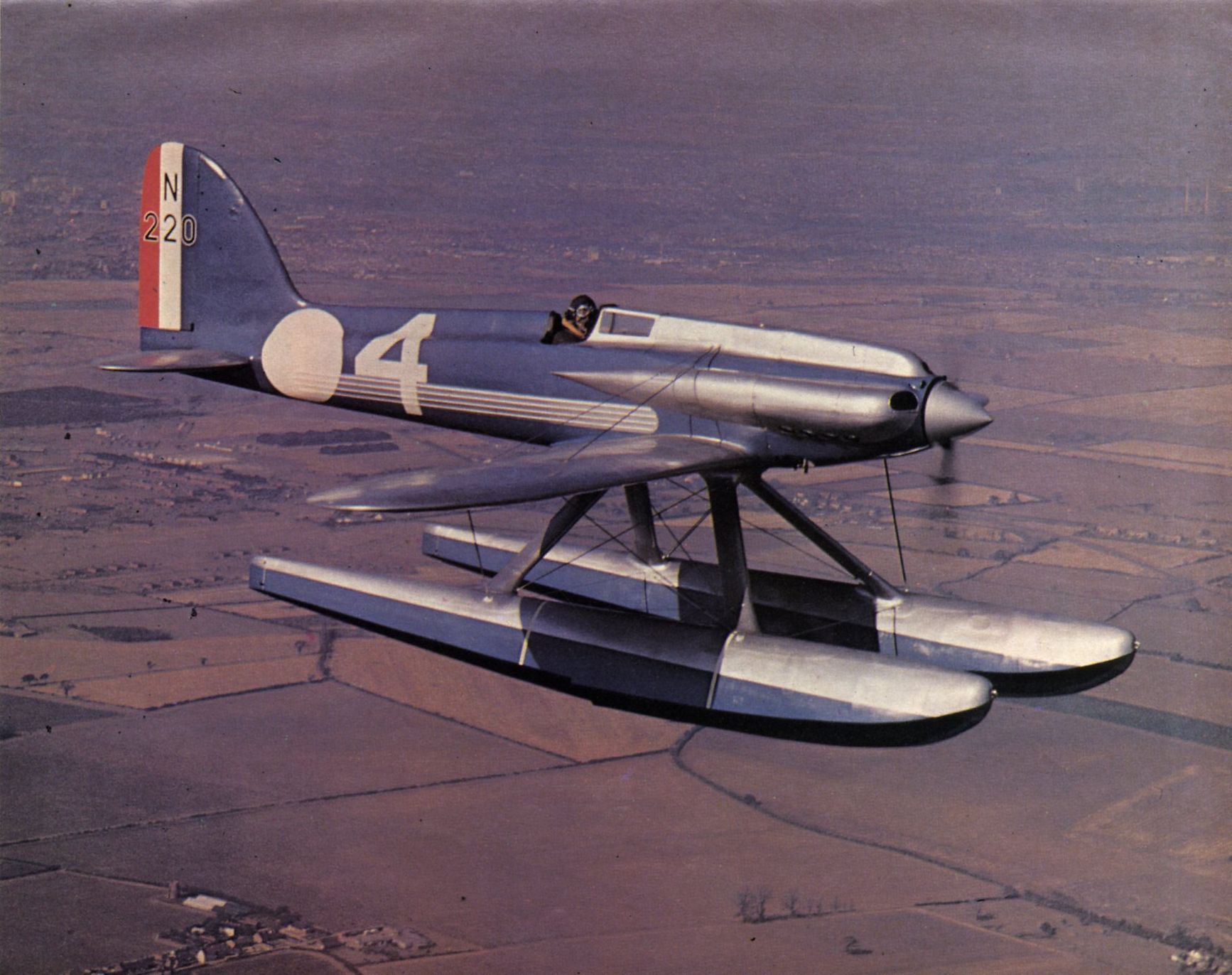 Cooling: The S6 was rather famously described by Mitchell as “a flying radiator” and the significance of this can be understood from the fact that during the Schneider Trophy race the aircraft was flown to the coolant temperature rather than to aerodynamic limitations or simply with the throttle pushed as far as it would go towards the firewall. Oil coolers flank the fuselage with the oil tank in the fin (giving a large cooling area in itself) whilst the upper and lower wing surfaces along with the upper faces of the floats are all coolant radiators. One area that hasn’t been fully exploited is the fuselage to the rear of the cockpit. If this was developed out to a continuous oval section then it would allow for dorsal and ventral surface radiators to be mounted here. Something that would once again move the centre of gravity back a bit but I suspect, overall, having a smaller influence than the larger engine. 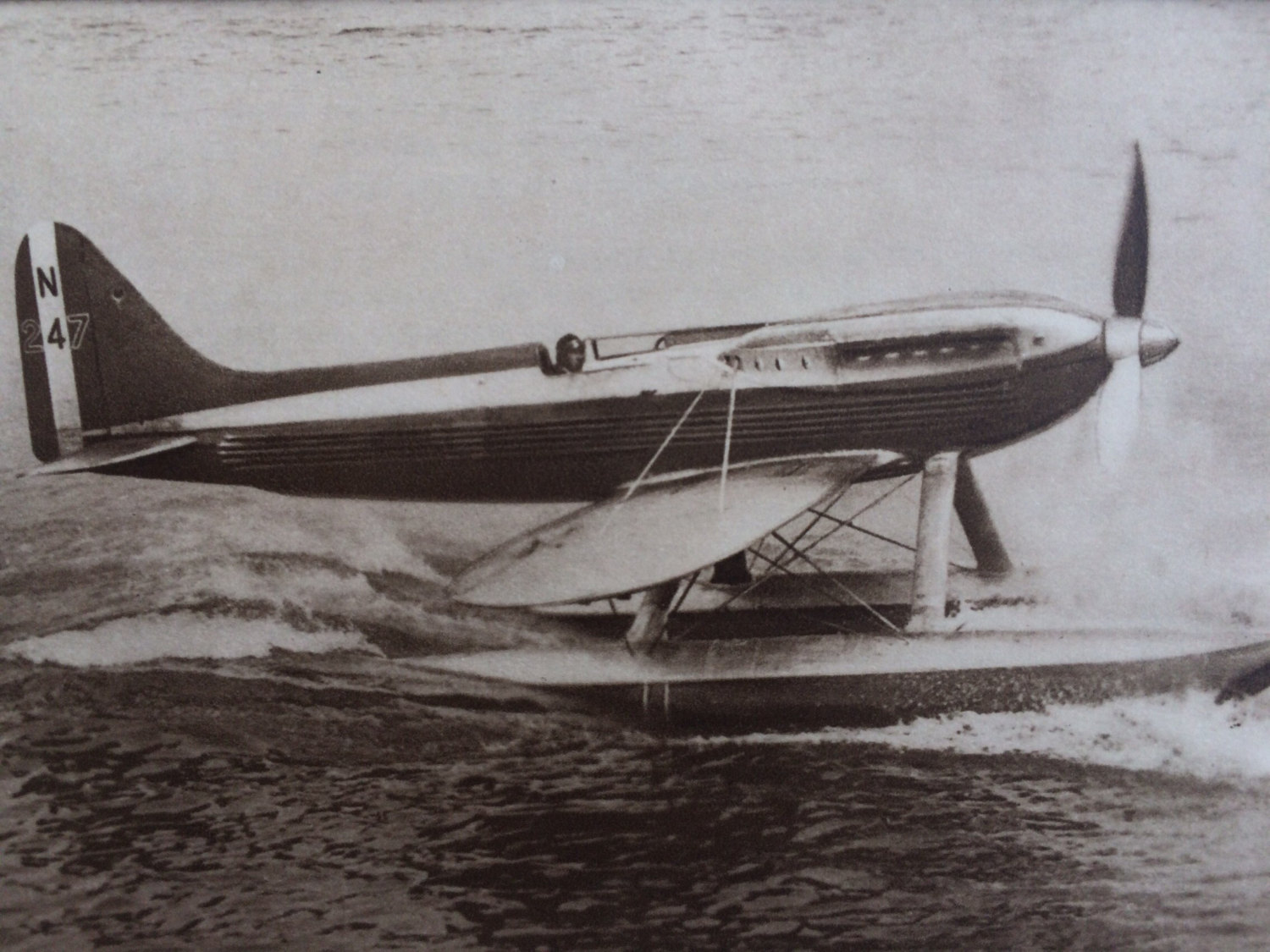 General Improvements: When I was fortunate enough to see Southampton’s S6 in bits what really struck me is that its a very simple aircraft. The application of 1930’s technology is highly sophisticated but crucially the aircraft is simply built to carry a powerful engine with as small a cross sectional area as possible and to remove heat. Oh, and to squeeze a pilot in there somewhere as well. In my proposed “S7” the overall structure of the aircraft would have to grow to cope with the extra power and weight of the ‘Super R’ and, along with the radiators on the rear fuselage, this may mean that the whole wing surface need not be used to get rid of heat. The enclosing edges of the radiators would still have to be straight edged as the ones on the S6 leaked and a curved perimeter would make sealing them even more tricky, but it does mean that more form can be give to the wing plan through using additional nose and trailing edge pieces. Looking at the S6 wing tip and tail the classic high aspect ratio ellipse leading edge / low aspect ratio ellipse trailing edge is already apparent.  This plan form was seen as a way of efficiently distributing the structure and the Spitfire show’s how Mitchell eventually managed to realise it as a “pure” design. It wasn’t just Mitchell following this theory either with the Short Crusader Schneider Trophy contender of 1927, among others, having a greatly exaggerated elliptical wing. With the removal of the need to maximise wing radiators and more development time RJ may well have got there sooner. 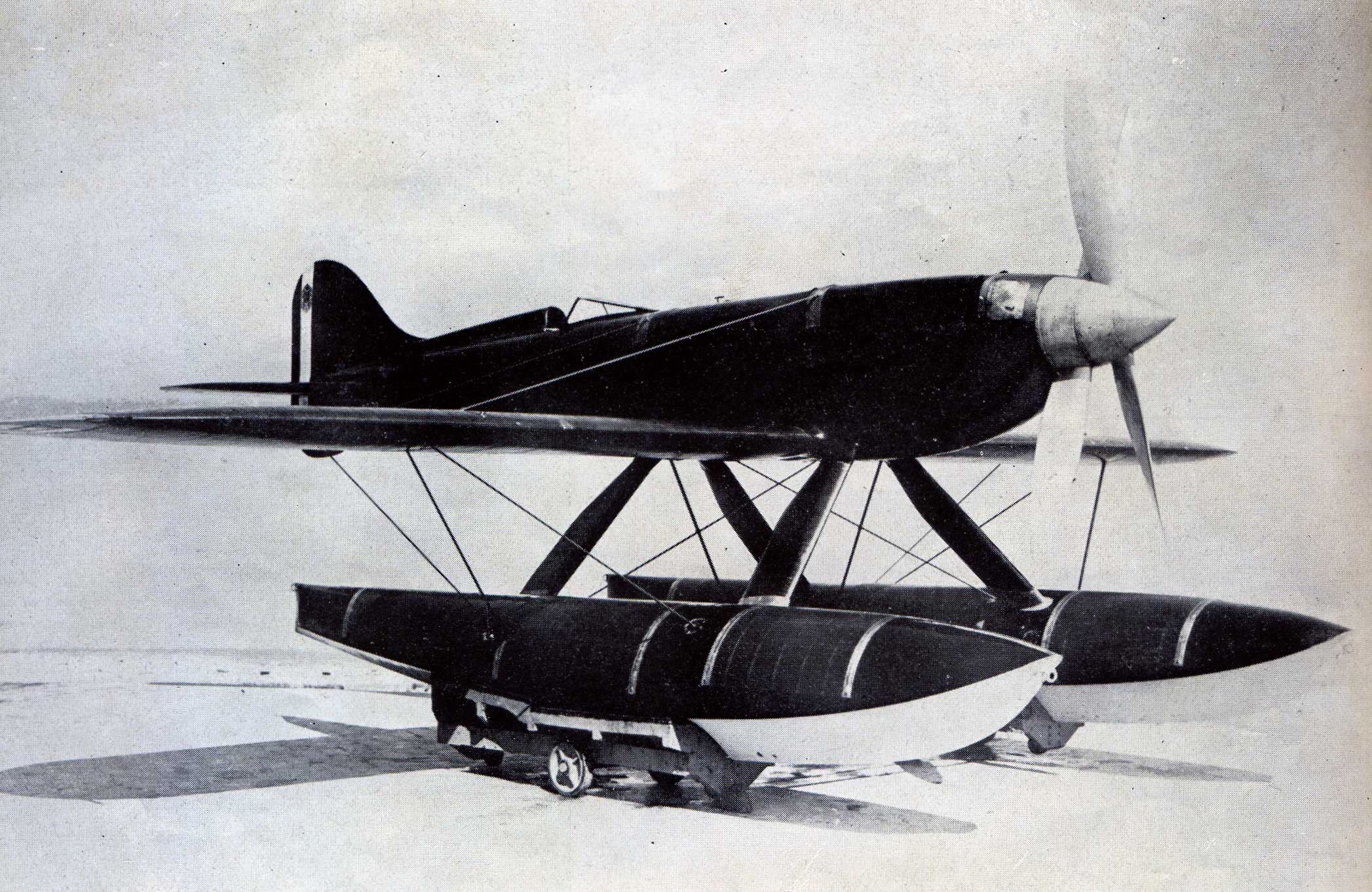 I see no reason why the fuel would not stay in the floats, as with the S6, but the final area that I think may have changed is the overall aircraft shape development. Up to the S6 Mitchell displays an almost pathological obsession with reducing the cross sectional area at every point along the aircraft. However this is only part of the story with parasitic drag being an area that could have been subsequently improved. If we look at the Macchi M.C.72 (that set the airspeed record at 440.7 mph in 1934)  it has a close cowled engine but not to the same extent as the S6, allowing a more progressive change in shape with fewer projections. Extrapolating this out to filleted wing roots may be pushing it a bit but if the time in the wind tunnel had been there then – who knows? Safer ground I think is the move to a fully enclosed cockpit. This reflects the record breaking trim of the Gloster VI in 1929 and surely, in the pursuit of aerodynamic efficiency, this would have been looked at? It may well have made the already poor visibility worse but a drop down or sliding perspex panel could at least have been used to allow a clear view out of the side when landing. With a fully enclosed cockpit comes the need for an improved air inlet, something that was introduced as a post build modification on the S6, so I’ve provided a couple of scoops on the top of the fuselage away from the exhaust gasses. The final aspect is the shape of air inlets and outlets where I’ve drawn on the Spitfire aesthetics more than the S6, although I did think ejector exhausts were a step too far. 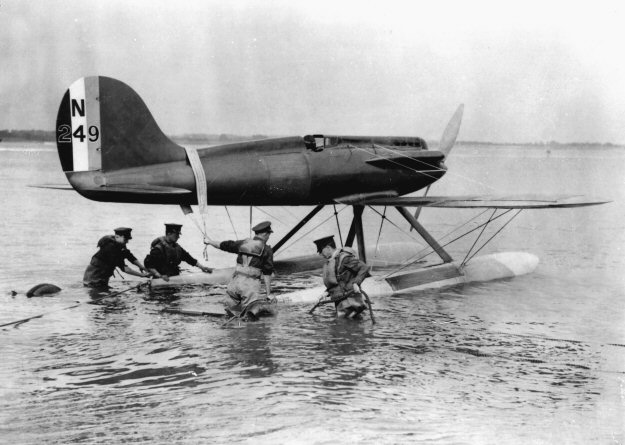 So there we have it, my ideas on what a fully developed S7 may have looked like, and why. It may be you agree with all, some, or none of this but the fun is in the speculation. After all, unless some previously undiscovered document comes to light, its something that we will never truly know. 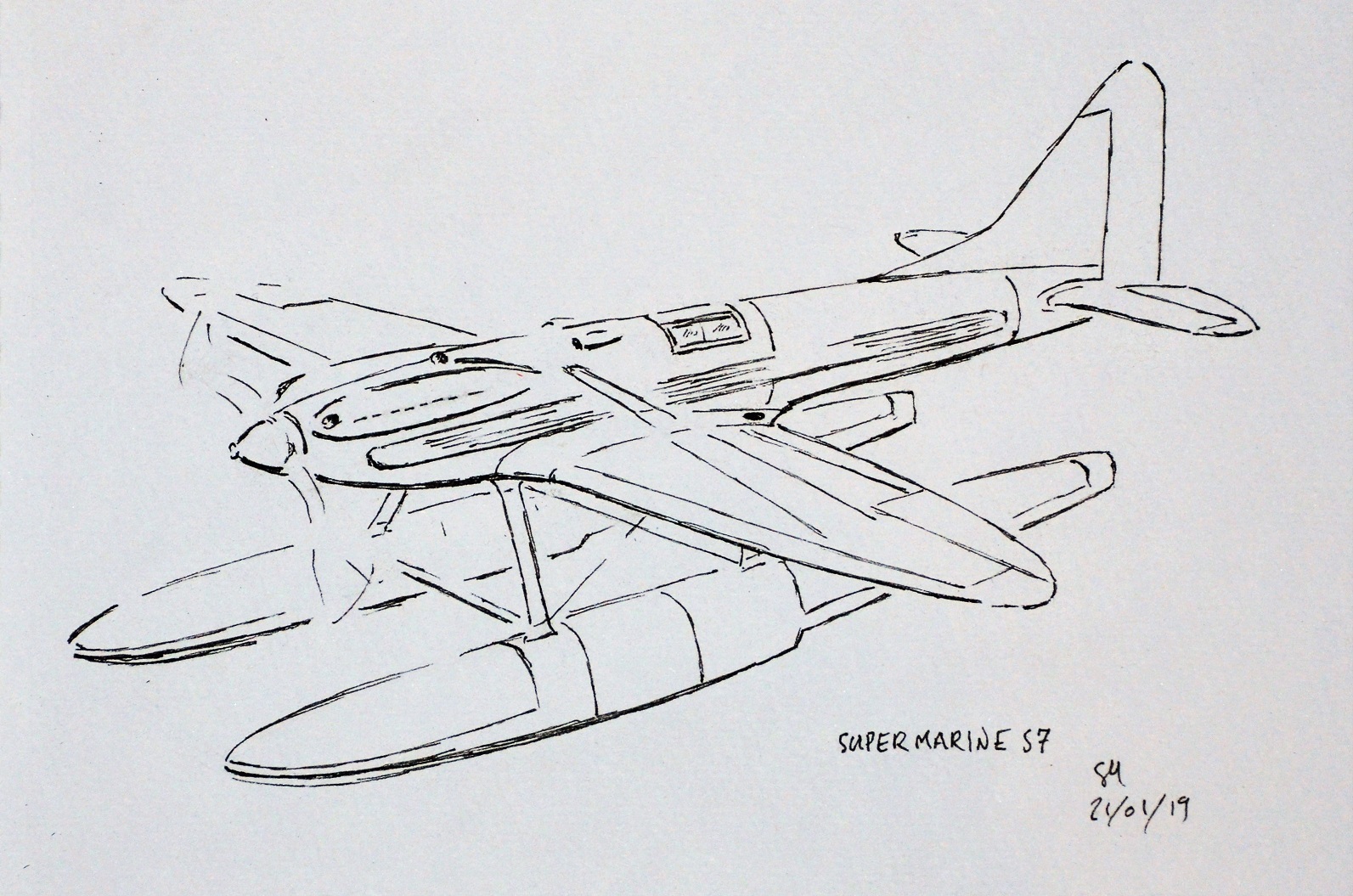 Our site is absolutely free and we have no advertisements. Those who donate are:

* There is no scientific evidence for these claims.