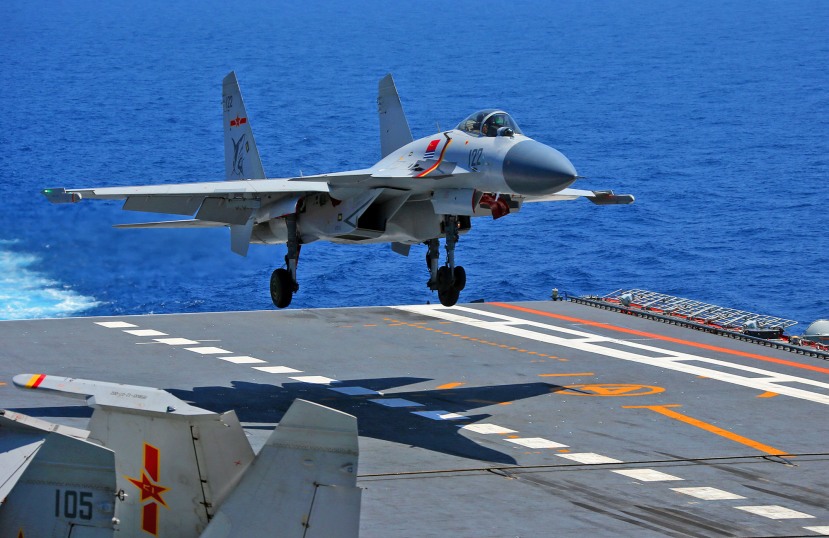 Today there are significantly fewer than 1000 carrier fighters in service around the world. Since our 2015 ranking of the world’s carrier fighters there have been some big changes. India’s Sea Harrier force was retired in 2016, and in the following year Brazil decommissioned its sole aircraft carrier the São Paulo, signalling the end of the carrier service of the iconic A-4 ‘Scooter’, a type that first flew in 1954! While France and the US are in the early stages of future carrier fighters, in the nearer term the US F-35C and India’s Tejas Navy should be the next carrier fighters to see full operational service. Meanwhile, Sweden’s Gripen Maritime has yet to receive an order. Here are the ten most potent (and only) carrier fighters in the world. 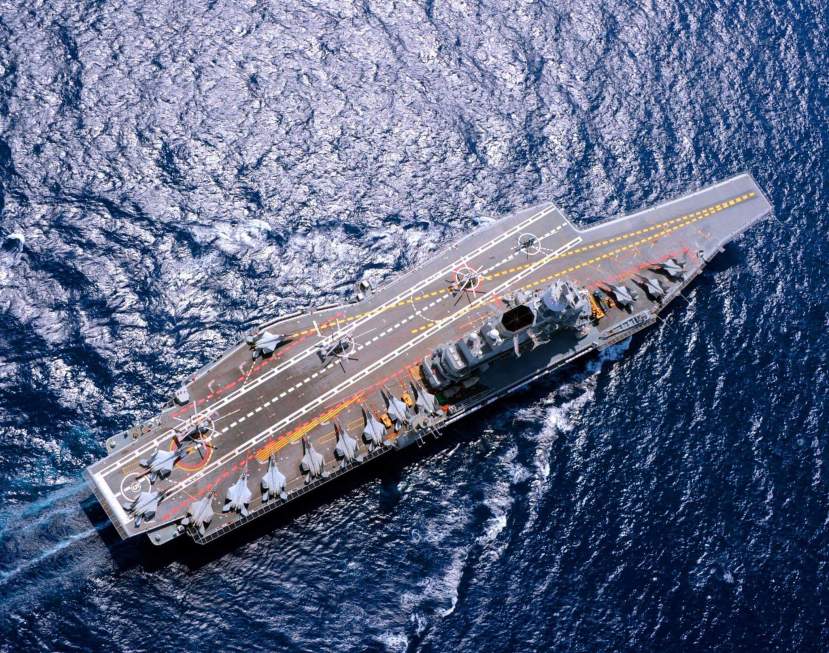 It’s a bit of cheat letting the HAL Tejas Navy in as it doesn’t appear to be that close to operational deployment, but with the loss of the Brazilian Skyhawks and Indian Sea Harriers we needed it to make it up to a list of 10! This maritime variant of a largely indigenous Indian aircraft has proved controversial and overweight, and has been criticised by observers around the world for its modest performance and troubled development. It will, however, be a major step forward for India’s defence sector and will boast a comprehensive avionics and sensor suite. Carrier compatibility trials are underway and it has already proven its ability to perform arrested landings and ski-jump take-offs. Other than the yet-to-be ordered Sea Gripen, the Tejas Navy is the only lightweight carrier fighter currently in development. 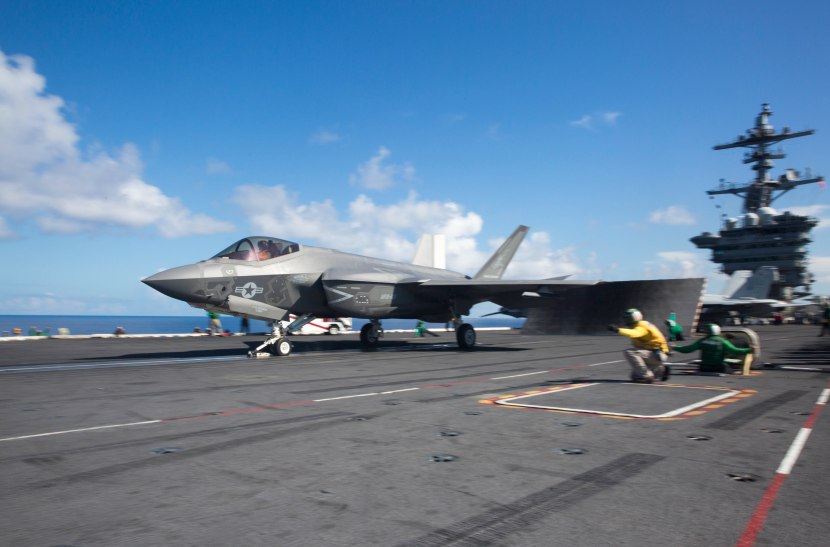 The slow ship in the F-35 family is the F-35C naval variant, F-35C is in service – but has yet to deployed operationally on a carrier. When it does it should prove more capable than the F-35B in several areas, enjoying a greater range (with a quoted combat radius on internal fuel of 670 nautical miles compared to the B’s 505) fuel load (8901 kg versus the B’s 6045 kg), wing area (57.6 m² versus 42.7 m²), and maximum take-off weight (31800 kg versus 27,200 kg). It will be no rocketship however, having the worst thrust-to-weight ratios of its generation: 0.75 at full fuel and 0.91 at 50% fuel (compare this with the Rafale M’s 0.988 with 100% fuel and four air-to-air missiles). As a carrier fighter, F-35s should be unsurpassed in situational awareness and stealth, though they will be dogged by the major pain of fifth-generation aircraft: extremely poor availability rates. Once fully operational the F-35C is likely to have a far higher ranking on this list. 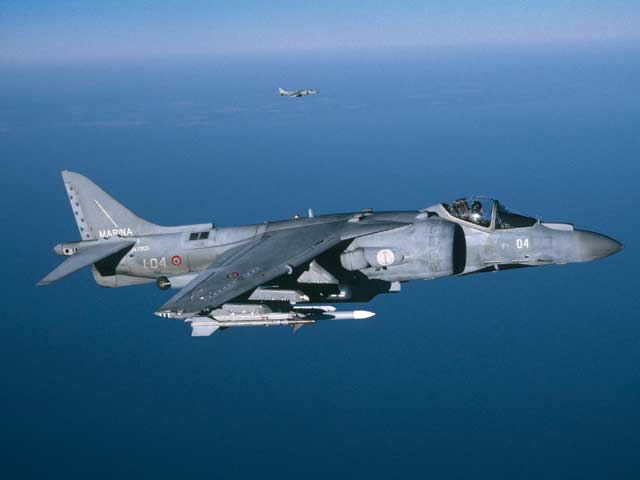 Since 2015, Marine Harriers have been exceptionally busy: bombing ISIS positions in Iraq and Syria, supporting Special Operations forces and attacking Al-Qaeda in the Arabian Peninsula (AQAP) in Yemen, and fighting over Libya as part of Operation Odyssey Lightning. A mature platform with AMRAAM capability and a wide range of air-to-ground stores, the modern Harrier is a well-equipped fighter-bomber that has proved itself in the Close Air Support role and the recce/attack/CAP roles. Once slated for imminent retirement, an assessment of the woeful state of the legacy Hornet fleet has given the type a reprieve, with the USMC wishing to hold on to it for as long as possible. The USMC AV-8Bs will receive revamped defensive measures, enhanced data-link capabilities and targeting sensors. It is reported that the Harrier II’s historically poor safety recorded has been dramatically improved in recent years. The Harrier II is by far the slowest aircraft on this list (it’s subsonic), has a large radar cross section and an engine that requires careful maintenance. 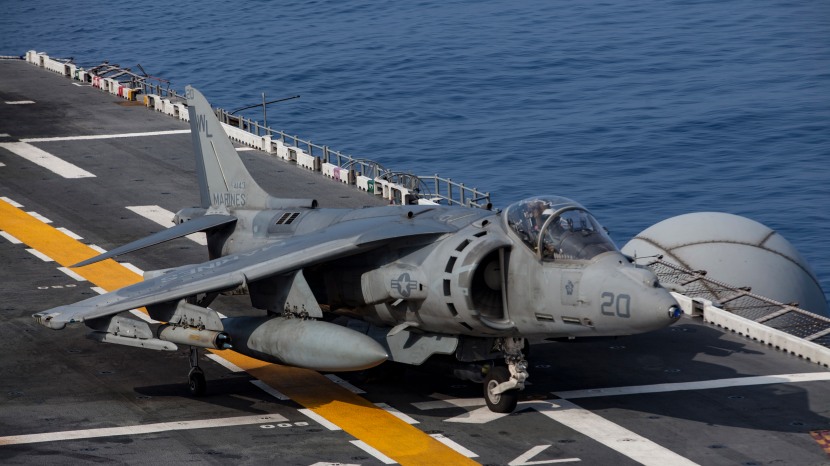 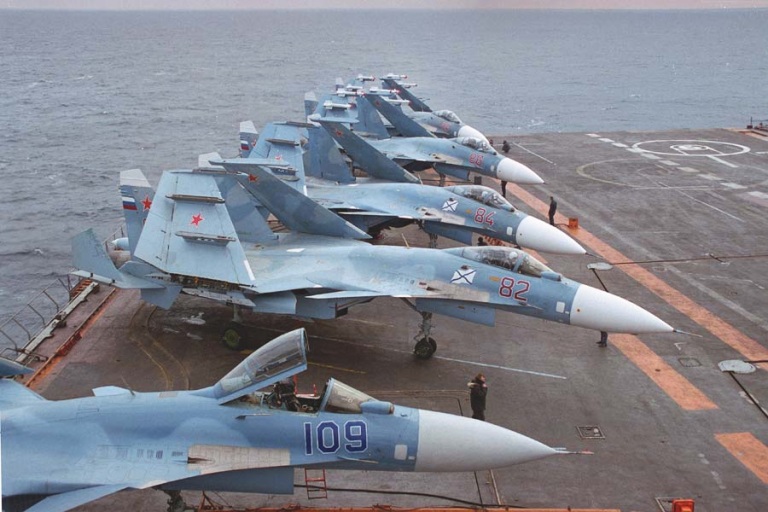 The Sukhoi Su-33 was intended to serve on Soviet aircraft carriers, however by the time it entered service the nation it had been developed to protect had disappeared. Only a small number were produced and were considered rather inflexible (with limited weapons options). Now their avionics suite is obsolete and they face the indignity (at least in Sukhoi’s eyes) of being replaced with the smaller MiG-29K. The Su-33’s combat debut was 2016, in support of President’s Assad’s forces in the ongoing Syrian Civil War. Russian naval Su-33s mounted attacks using dumb unguided bombs. On 5 December 2016, a Su-33 crashed into the Mediterranean Sea after failed 2nd landing attempt due to a problem with the ship’s arrestor cable. The pilot successfully ejected and was picked up by a Russian search and rescue helicopter. The Su-33 has received modest upgrades, including a new bomb aiming computer. Russia’s sole carrier, Admiral Kuznetsov, is currently out of service following a crane crashing onto the deck in November 2018 causing significant damage. There are very few Su-33s, around thirty remain operational. 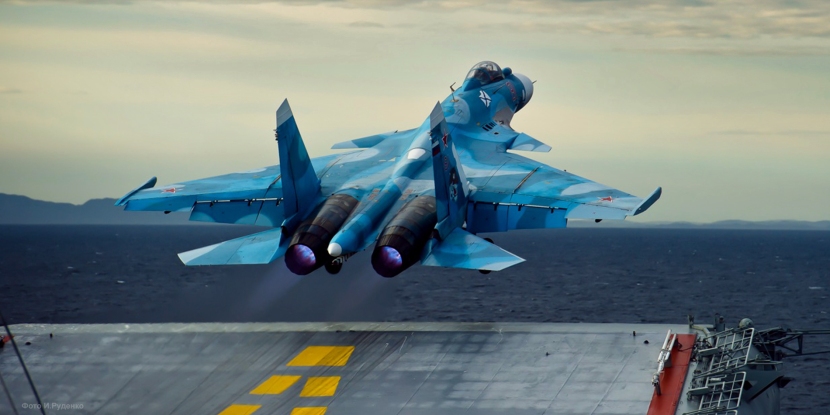 We need you. YOU could support this site, enabling more articles like this and massive kudos for yourself. Please do have a look here to keep us going. Thank you

When Russia selected the Su-33 for its carriers many thought it had gone for the wrong type, as the smaller MiG-29 offered more versatility. A complicated saga ensued, and was made more complicated by the fall and then rise of the Russian economy, MiG’s precarious position and the Indian Navy’s order for the type. The MiG-29K is a world away from the original ‘Fulcrum’ in terms of range, pilot interface and sophistication, and is one of the nastiest naval fighters to tangle with in the within-visual range merge. It is no slouch in the BVR regime either, with an advanced radar and the widely feared R-77 ‘AMRAAMSKI’. The type briefly served in Syria dropping dumb bomb. Two have been lost at sea.

India received the last of its 45 MiG-29Ks in 2017. Like the Su-33, the aircraft is that miraculous and very unusual thing: a carrier aircraft developed from a land-based type. Historically, such aircraft typically proved terrible, but it was hoped that the type’s high thrust-to-weight ratio and tough airframe would allow it to buck the trend. However, the Indian Navy has recently noticed deck landings are taking their toll on the Fulcrum and are demanding it be further ‘ruggedised’. This has dropped the MiG-29K’s ranking in our list. 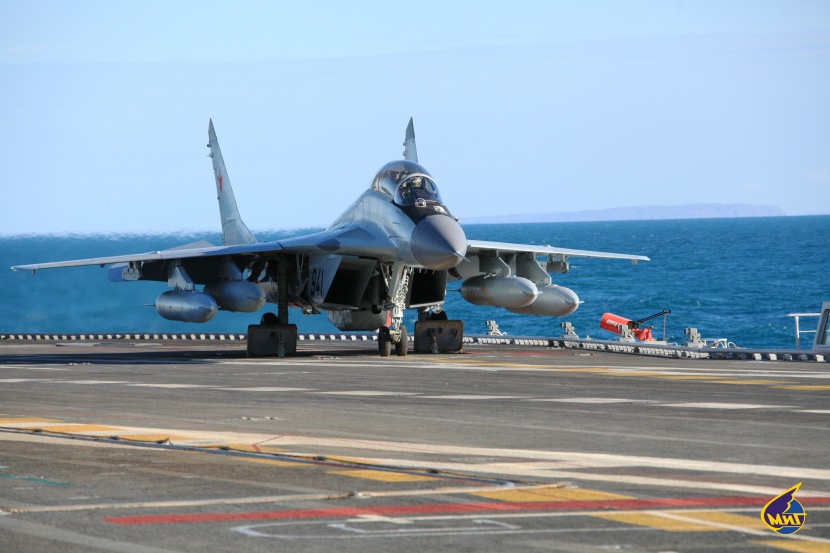 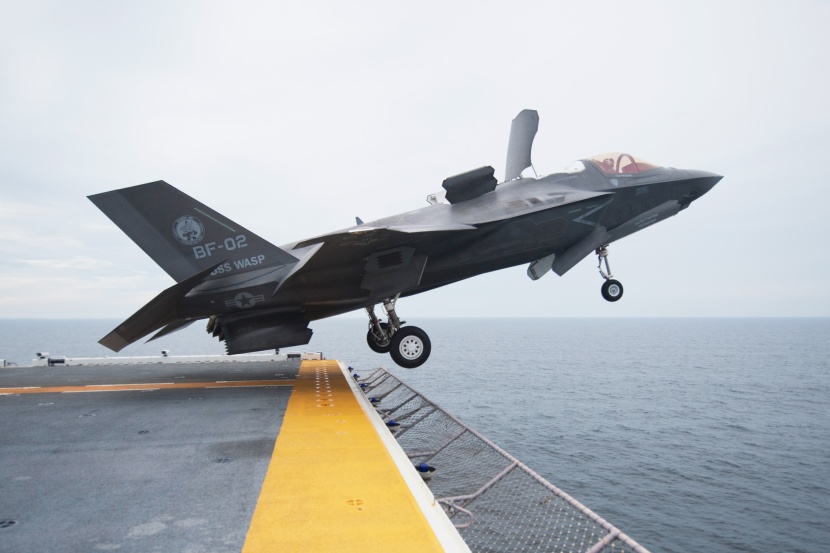 Since 2015 the STOVL F-35B has become fully operational. In September 2018, a USMC F-35B executed a strike mission in Afghanistan, marking the first combat use of the F-35 in US service (following Israel’s use of F-35As in early 2018). This ‘catapults’ the F-35B from a number 10 position in 2015 to a respectable fifth in our list. Only immaturity and continued technical problems preclude its reaching a higher spot. The type is currently approaching operational service with the UK.

It was thought that the plucky ‘Bug’ was now in the twilight of its career, but it will fight on with the Marines for some time. When it arrived on the scene in 1983 it was extremely advanced and trail-blazed many of the features that have since become de rigueur for fighters, especially in the field of cockpit design and multimode radar. It remains the fighter to beat at low altitude and is still held in awe as a dogfighter (according to pilots it has the edge on its larger brother in a ‘knife fight’). It was always short on range and struggled at the top right-hand corner of the performance envelope. Now gone from US Navy carriers it remains on the decks with the Marine Corps who intend to squeeze every last hour from their airframes, flying them until 2030. From 2020, 88 USMC Bugs will be receiving APG-79(V)4 AESA radars. 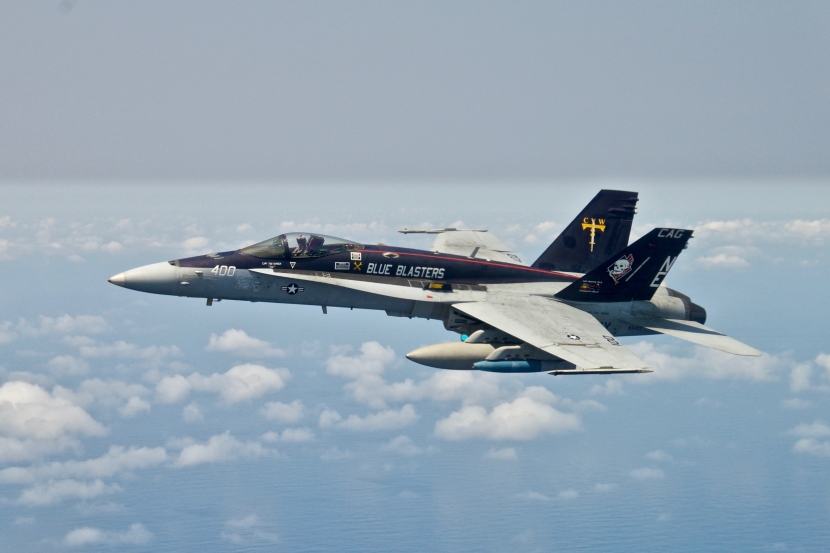 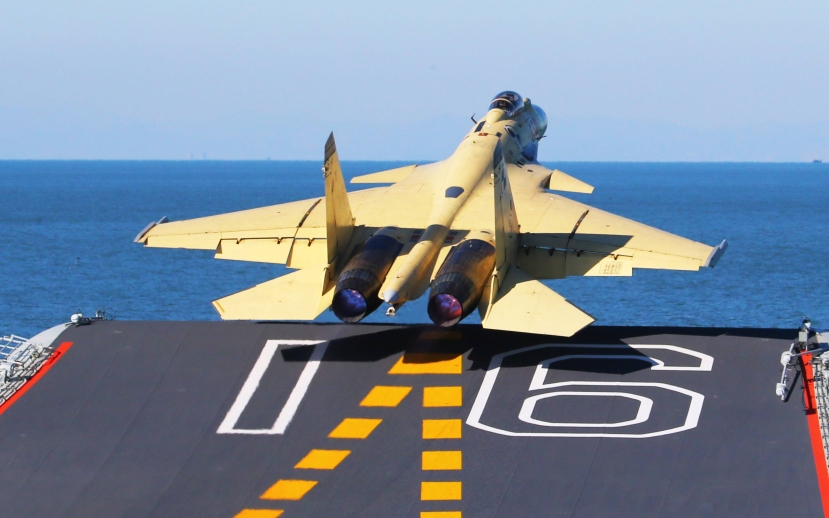 Far more mature they were in 2015, the Chinese navy’s pirate ‘Flanker’s are now formidable machines and would pose a serious threat to any opposing carrier aircraft. Utilising the best of China’s indigenously developed (and highly respected) weapons and sensors, the J-15 is a sophisticated, agile and long range fighter. In terms of all-out performance, it enjoys a significant advantage over the Hornet family in several respects, most notably in high altitude performance.  A major drawback , however, is the relatively small size of China’s Liaoning aircraft carrier: its small deck is too short to facilitate take-off and landings of J-15s at heavy weights, and so does not allow them to be used to their full potential (the carrier uses STOBAR instead of cats and traps). The J-15D is a two-seat electronic warfare variant akin to the US EA-18G Growler. 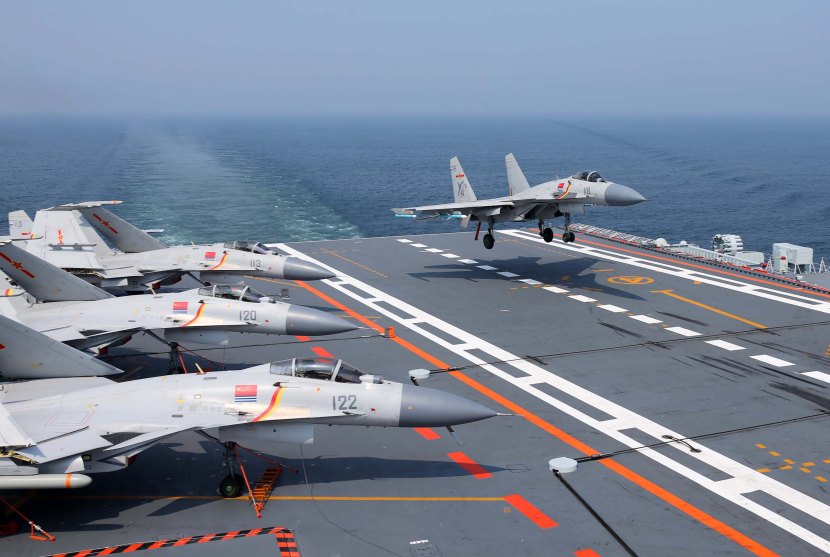 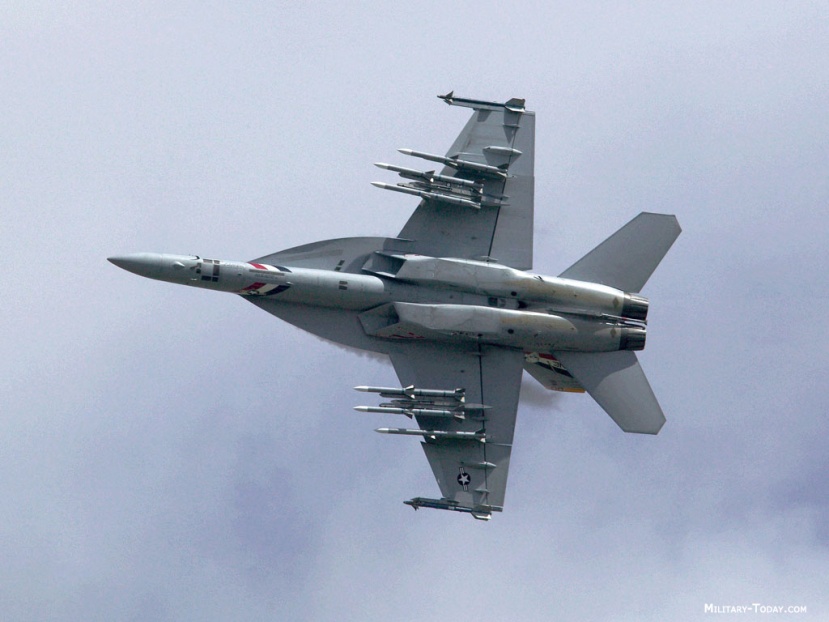 The Super Hornet rectified the legacy Bug’s main shortcomings of limited range and bring-back (the weight of stores that the aircraft can bring back to the carrier after a mission). It also featured radar cross-section reduction measures that are rumoured to make it the stealthiest fighter (in terms of frontal cross section) this side of the F-35/ F-22 (though Dassault may dispute this). The Super Hornet retains the ‘Turbo Nose’ of the Hornet (the almost uncanny ability to point the aircraft quickly and accurately). Though the APG-79 AESA radar of Block II aircraft has been plagued with unreliability issues, it was one of the first to offer simultaneous air and ground modes. The Super Hornet is fitted with some great kit, and is compatible with a larger range of stores than any other fighter on this list. It falls down in its poor performance at higher altitudes and speed, where its relative lack of poke is a real issue. Despite this, the Super Hornet has repeatedly proven its ability to rise to any challenges as a robust and reliable fighter-bomber. (All US Navy fighters are supported by the E-2D Advanced Hawkeye, a powerful force multiplier with a ‘stealth-busting’ UHF radar). 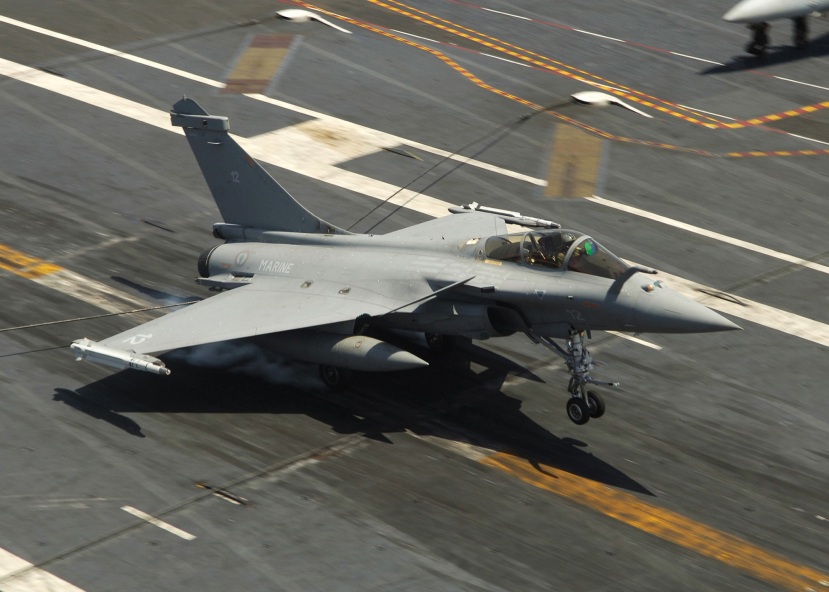 Dassault’s Rafale is a masterpiece of aeronautical engineering. Despite being burdened with the additional weight of being a carrier fighter, it can mix it with the best fighters in the world (which it has demonstrated on exercises with the F-22 and Typhoon). In performance terms, it is closely matched to the Typhoon, with the French fighter enjoying an advantage at lower altitudes. Few fighters excel at both the fighter and the bomber mission, yet the Rafale is a rare exception. According to one test pilot, the Rafale’s flight control system is unmatched in its responsiveness and precision (and markedly superior to the F-16). This is an important consideration, especially for a carrier fighter. Defended by SPECTRA, which some regard as the best defensive aids suite in the world, guided by one of the world’s most sophisticated radars, and well armed with weapons that include the most advanced aircraft cannon – the Rafale is the hottest naval fighter in the world.

You can find out about the worst carrier aircraft here

“Never fly the ‘A’ model of anything” expect amends to this article over the next few weeks. 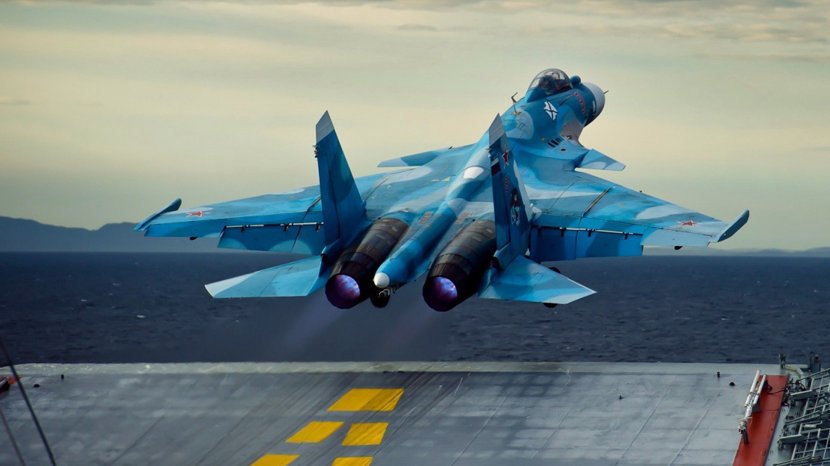