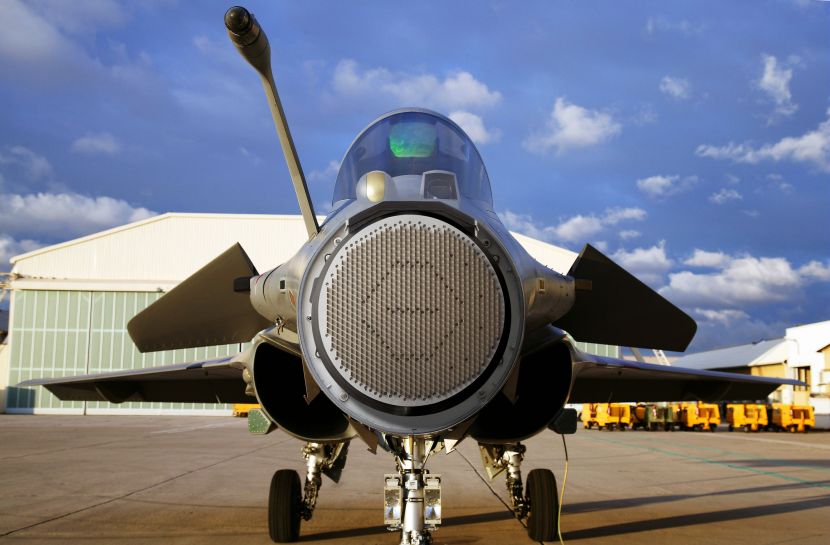 While the Typhoon and Gripen patiently wait the arrival of AESA radars, the Rafale has been operating with this modern sensor since 2013. The RBE2 AESA (it really needs a name) is the first fighter AESA in series production outside of the US and Japan, and put Thales at the forefront of radar technology. We went to the manufacturer of the RBE2, Thales, to find out more.

(As we have already said, the new radar does need a name- our suggestion would be ‘ravisseur’…)

What is the current contractual and funding status of RBE2 AESA?

When did the first AESA radar enter service?

The first entered service in summer 2013.

How many have been delivered to the customer?

We are exactly in line with our contractual commitment.

What percentage increases over PESA will the radar offer in terms of search and tracking ranges?

In terms of performance, detection range is increased by considerably more than 50% and the radar can look in many directions at the same time offering significantly enhanced tracking capabilities.

How much of an improvement will it be?

Angular coverage in azimuth is improved and very small targets with lower radar cross section such as cruise missiles can also be detected. Furthermore improvement of the situational awareness allows pilots to enlarge their potential to ensure the success of their mission.

How many transmitter/receiver modules does it have?

The active array is made up of several hundreds of T/R modules. It is confidential.

How does it compare with the Typhoon’s Captor in terms of detection range?

AESA radar of the Typhoon does not exist today. It seems to be a prototype. When it is in service on board the Typhoon comparison will  be possible to be done !

What modes does it have?

RBE2 provides unprecedented levels of situational awareness, with earlier detection and tracking of multiple targets as well as the capability of using several radar modes at the same time:

• All-aspect look-down/look-up detection and tracking of multiple air targets for close combat and long-range interception, in jammed environment and in all weather,

• Real-time generation of high resolution air to surface detection for navigation and targeting,

Does it have aggressive jamming or hacking modes? Can you explain this more.

What bands does it operate in?

It operates in X band.

Would multi static or similar operations be possible: could the radars of two Rafales work together to detect low RCS targets?

Yes,  thanks to coordination two Rafale can work together.

Is the new radar heavier than the baseline RBE2, how much weight is added by increased cooling?

It is the same weight and same interface as the baseline RBE2.

What features will the radar use to detect low RCS targets?

How long would it take to fit a RBE2 AESA to a Rafale built the with baseline PESA radar, what changes would have to made?

It takes less than 2 hours as we have just to remove the PESA antenna and to plug and play immediately the AESA antenna.

How much will it cost per unit?

Is the lack of a  repositioner a disadvantage in terms of field of regard?

We made the analysis as early as in the middle of the nineties to evaluate the advantage to use or not a repositioner. Our conclusion was that this solution works well when the situation is not complex but it is absolutely irrelevant when it becomes more dense due to a high quantity of targets spread in space.

No, it is not a disadvantage. We rejected the repositioner as this solution is not relevant for the majority of the missions.

Was the RBE2 the first fighter AESA produced outside of the US and Japan?

Yes it is the first and only serial AESA produced in Europe.

Are there any plans to offer the RBE2 AESA as a radar for F-16s?

No the RBE 2 AESA is specifically designed for the Rafale.

Want something more bizarre? The Top Ten fictional aircraft is a fascinating read