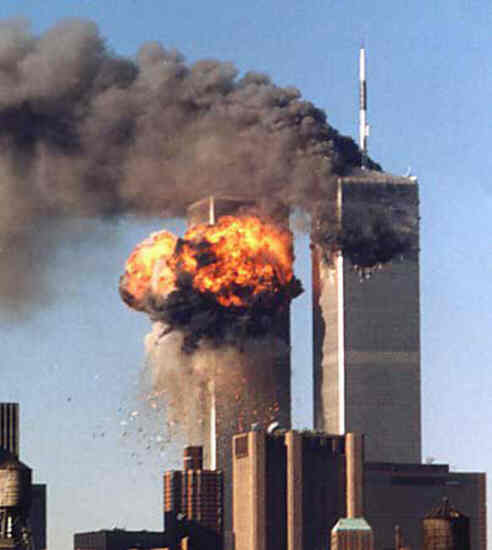 Nick Pope investigated UFOs for the UK Government. Today he is recognised as one of the world’s leading authorities on UFOs, the unexplained and conspiracy theories. Hush-Kit asked him for his views on the most controversial aeronautical conspiracy theories.

Is there any evidence to support the 9/11 conspiracy theories?
There’s no significant evidence of any conspiracy here. 9/11 was not an “inside job”, and neither was it “allowed to happen”, with the powers that be looking the other way. I learned a lot about conspiracy theories (and found myself at the centre of a few!) while investigating UFOs for the MoD, and comment on the subject extensively in the media. It’s clear to me that 9/11 conspiracy theories – like most conspiracy theories – arise partly because of public distrust of government, and partly because of misunderstandings about the way in which governments and the intelligence agencies work. To give an example, the CIA was aware of two of the 9/11 hijackers, but didn’t inform the FBI. This might sound sinister, but poor information-sharing is typical in the intelligence community. Applying a bit of science and a bit of common sense deals with all the various 9/11 conspiracy theories. As an example, some people say the towers couldn’t have collapsed as a result of aircraft hitting them, because aviation fuel doesn’t burn at a sufficiently high temperature to melt steel. This is flawed reasoning, because all that was necessary for the towers to collapse was for the steel to lose its structural integrity, and that happens at a lower temperature. And that’s exactly what happened. Bizarrely, there are even a few engineers and architects who support 9/11 conspiracy theories (most, of course, do not). All I can say is that I wouldn’t let them anywhere near my house! 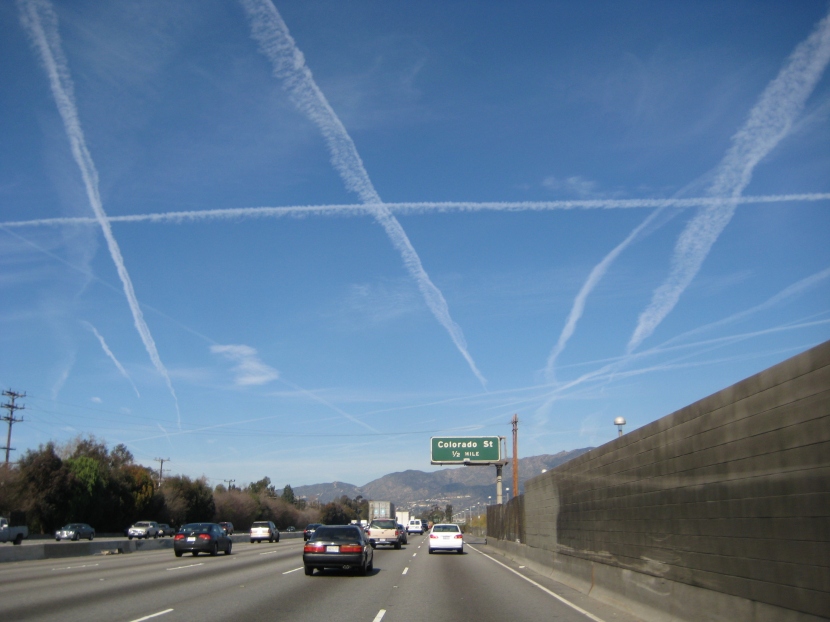 What is the chemtrail theory and is there any truth in it?
When I was a kid, I was taught that the trails I often saw behind aircraft were called contrails, or vapour trails. Now, some people call them chemtrails and think they’re part of a sinister New World Order plot to poison people. The theory is crazy. You’ve only got to see how low crop-spraying aircraft need to fly to be effective to realise that spraying anything from 35,000 feet is going to have no discernable effect. And where are all these aircraft supposed to come from? I know from my MoD career that both in the UK and the US, the Air Force struggles to complete its core tasks, so the idea of fleets of aircraft spraying an unsuspecting population in science fiction. Interestingly, the US Air Force was getting so many questions about this that some years ago they put an article entitled “The Chemtrail Hoax” on their website. It has also been suggested that chemtrails relate to secret weather control projects. I’m skeptical about this too, though there’s no doubt that the US Government (and others) have done some work on weather modification, e.g. Project Popeye, where the US military seeded clouds to make it rain on the Ho Chi Minh trail, during the Vietnam War. Additionally, the concept of geoengineering (championed by people like Professor David Keith) is attracting increasing attention given that climate change continues to be such a major political issue.

How did Amy Johnson die?
The official story is that she flew off course while ferrying an aircraft to a military base (standard work for an Air Transport Auxiliary officer), ran out of fuel and ditched in the Thames Estuary, where she drowned. There’s a claim that she was shot down by UK anti-aircraft fire after failing to respond to a request for a coded signal, but that’s based on a single, unverified claim from a former gunner who believes he was responsible. There’s a related theory that the ship involved in her rescue reversed and that Johnson was killed by the propellers. There was – and still is – huge sensitivity over so-called ‘friendly fire’ incidents, and this would have been compounded by the fact that the victim was one of the most famous women in the world, so these theories aren’t too outlandish. There are some less likely conspiracy theories about Amy Johnson’s death, e.g. that she was shot down by the Germans, was fleeing the country with a (possibly German) lover, that she was engaged on a secret government mission, or even that she faked her own death. Short of discovering the wreckage of her aircraft, the mystery is unlikely to be resolved.

Should we believe any UFO reports are alien spacecraft – if so which are hardest to explain away?
We shouldn’t believe it, but we shouldn’t rule it out either. There’s certainly some intriguing evidence, but no definitive ‘you can take it to the bank’ proof. Over the years, the MoD’s UFO project investigated around 12,000 UFO sightings, and many other governments had similar research efforts. The cases that we found most compelling were ones where the witnesses were pilots, and where an uncorrelated target was simultaneously tracked on radar. There are plenty of such cases in the MoD’s UFO files, but they’re buried among thousands of less interesting cases (the best place to hide a book is in a library!) and are hard to find. Those of us who have looked at this issue from within government have mixed feelings about the UFO phenomenon. On the one hand, there are a lot of easy-to-explain cases out there, involving misidentifications and hoaxes. And it’s frustrating to constantly be accused of being part of a cover-up. On the other hand, there are some genuinely unexplained cases too, and as we always used to say, the believers only have to be right once! The most compelling and mysterious UFO case of all time is probably the Rendlesham Forest incident, and I co-wrote a book about this (“Encounter in Rendlesham Forest”) last year with the two main witnesses, John Burroughs and Jim Penniston, both of whom were in the United States Air Force at the time of the incident. 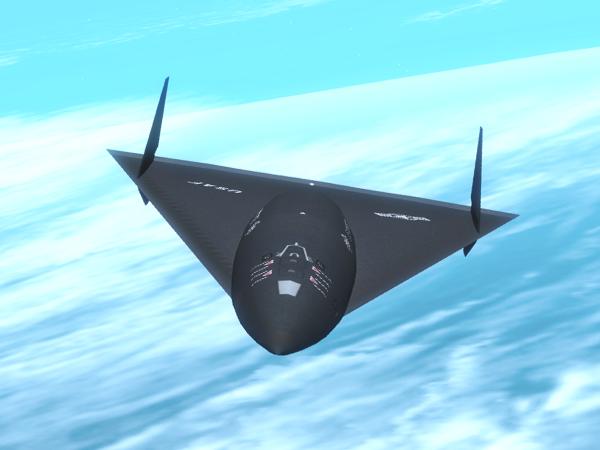 Was the Aurora spy plane real? What evidence was there?
I was personally involved in this controversy, because of the theory that many UFO sightings being reported to the MoD in the early Nineties might involve secret prototype spy planes – possibly Aurora. To clarify the position we asked the US Government for assurances that no such aircraft was being operated in UK airspace. We were given these assurances (and told that the aircraft didn’t exist) and on that basis, Defence Ministers gave similar assurances to Parliament. But some of my colleagues in the MoD’s Defence Intelligence Staff weren’t convinced, and asked the Americans again, which nearly caused a diplomatic incident, as the US Secretary of the Air Force took this as an accusation that he’d lied to the UK and misled Congress. So I think I’d better stick to the line that Aurora never existed, for fear of causing another diplomatic incident! 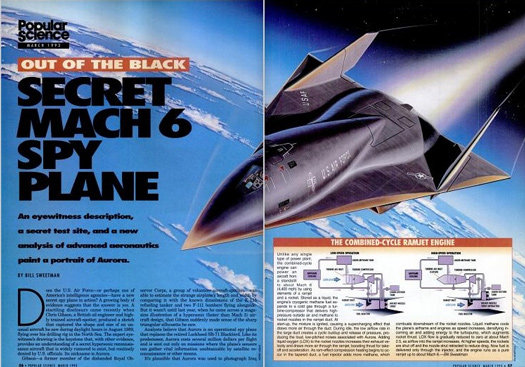 How many nations are likely to be flying secret aircraft projects today and what are they?

More than we think, I suspect, especially if one includes UAVs. I don’t think it’s any great secret that countries such as the USA, Russia, China, the UK, France, Israel, India and Pakistan operate and are developing a range of secret, prototype aircraft and drones, with technology running many years ahead of what you’ll see at the Farnborough or Paris airshows, or in the aviation press. I’m sure other countries are in the game too, but even with their being the target of sophisticated intelligence-gathering operations, it’s difficult to be certain about countries such as Iran or North Korea. And with that, I’m probably in danger of straying into areas that are classified, so on the basis that the Official Secrets Act binds me for life, I’d better not say any more on this point.

Want something more bizarre? The Top Ten fictional aircraft is a fascinating read

Read an interview with a Super Hornet pilot here.