In the turbulent 1970s there was a saying about Canada: we could have had French food, British government and American technology but instead we wound up with American food, French government and British technology.  Well, this over-populated, over-heated world has pretty much gone to shit and now everybody everywhere is up to their neck in cheap plastic crap made in China.  Yes, times change and the potential greatness just swirls off like some beautiful chemtrail in a carbon-laced sky.  Take the Avro Canada C.102 Jetliner, a four-Derwent airliner prototype from 1949. Ahead of the Boeing 707, the Jetliner was Canada’s first jet design and North America’s first jet airliner.  It was the premier regional jet, beating the Sud Aviation Caravelle by a decade and Bombardier by a lifetime.  The C.102 carried the first ever jet air mail: Toronto to New York City in an hour.  Howard Hughes took it for a spin, loved it so much he leased it for six months.  Damn English carpet-baggers running Avro Canada dropped this handsome, commercially promising bird to soak the RCAF budget with the CF-100 instead.  Good work federal government, Trans Canada Airlines and Avro Canada.  It was the perfect prelude to the capable, expensive and cruelly quashed CF-105 Arrow.

So where is the C.102 now? Well, the nose is in a museum in Ottawa. Oh, and the landing gear ended up on a farm wagon some place.

Get a lock-on to Hush-Kit on Twitter
Stephen Caulfield cleans limousines around the corner from what was once the Avro Canada plant.  He appreciates writing, art, aeroplanes and the tragic nature of modernity in pretty much equal parts these days.  His blog is www.suburban-poverty.com 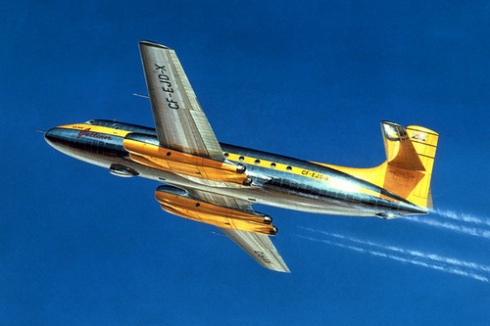