In an earlier Air-Minded post, I wrote about the early days of aerial refuelling and the initial development of USAF tanker aircraft and refuelling methods. This post is about the USAF jet fighters, interceptors, and attack jets that depend on those tankers to get to where they’re going and back home again.

In World War II, US Army Air Force bomber crews called escort fighters ‘little friends.’ In the late 1940s the brand-new US Air Force contracted for a jet escort fighter, a plane that became the F-101 Voodoo. Jet engines use a lot of fuel, but aerial refuelling tankers were coming into common use, so the Voodoo was designed with aerial refueling capability. If you’ll indulge me, for the remainder of this post I’ll save screen toner by referring to aerial refuelling as AAR (air-to-air refuelling, the acronym used in the biz).

In the early 1950s, the USAF was of two minds on AAR: it employed both probe and drogue refuelling (the tanker trails a hose with a stabilising drogue chute on the end; receiving aircraft fly up to the drogue and plug in with a probe) and boom refuelling (the tanker extends a boom which connects to a slipway in the receiving aircraft). Probe and drogue was great for little friends but not so great for big friends. Fuel transfer through a rubber hose is slow, and bombers need a lot of fuel. Over time the big friends and boom refuelling won out, at least with the USAF: with a high rate of fuel transfer bombers can top off quickly; fighters, whose internal fuel plumbing might be damaged by high transfer rates, take on gas at a lower rate, which can be selected by the tanker’s boom operator.

Even today, though, the USAF still uses both methods. All our bombers, strategic airlifters, command & control and surveillance aircraft, tankers themselves, fighter and attack aircraft, plus certain specialised mission aircraft and VIP transports (think Air Force One) use boom refuelling. USAF helicopters & tilt-rotor aircraft use probe & drogue refuelling; so do allied nation aircraft and the Navy & Marine Corps aircraft USAF tankers are often called upon to support.

Due to the nature of air refuelling it has long be a joke to compare the process to sex. At least two F-105s had sexualised images of a woman around their slipways creating a visual reference of a penetrated vagina for the boom operator. Due to the tanker aircraft generally being larger – and proving safety and nourishment it is also no uncommon to compare it to a mother feeding her young.

Back to the Voodoo, which became operational in 1957. Both AAR methods were in wide use at the time, so the F-101 was equipped with a retractable probe and slipway. The probe was stowed in the nose when not in use; the slipway was on top, aft of the cockpit. The first photo shows an F-101A, the long-range escort fighter version of the Voodoo, plugged into a KC-97 tanker boom. The second photo shows an RF-101 reconnaissance variant with its retractable refuelling probe extended, about to plug into the drogue on the end of a refuelling hose (you can also see the closed slipway on top, the light grey panel halfway between the cockpit and the tail).

Another early jet fighter, the F-84 Thunderjet, although not used in the bomber escort role, also incorporated equipment for both AAR methods: a slipway in the left wing root for boom refuelling, and probes on the tip tanks for drogue and hose refuelling (the later swept-wing versions of the F-84, the Thunderstreak and Thunderflash, kept the slipway but did not have the tip tank probes).

The last of the so-called ‘hermaphrodite’ fighters was the F-105 Thunderchief, which became operational in the late 1950s. The Thud had both a slipway and retractable probe, both mounted in the nose. Here are two photos of Thuds taking gas. In the first photo, note how the refueling hose is connected to the end of the tanker’s boom, a method still in use by USAF KC-135 tankers. In the second photo, the F-105 on the boom is a two-seat G model used for Wild Weasel surface-to-air missile suppression during the Vietnam War (with F-4 Phantom IIs waiting their turn on the tanker’s wing):

By the way, the Thud was one of the few USAF fighters that could conduct buddy refuelling, a technique often used by carrier-based Navy and Marine fighters. 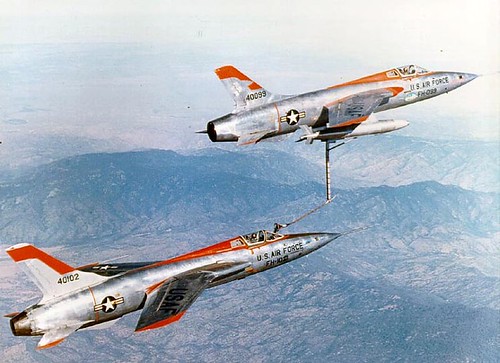 Curiously, the interceptor variant of the Voodoo, the F-101B (CF-101 in Canada), did not have AAR capability. Well, it did at first … when the F-101B became operational in 1959 it was equipped with the retractable nose probe, but a fleet-wide modification in the 1960s replaced the probe with a nose-mounted infrared seeker and AAR capability was lost. The interceptor Voodoo, perhaps because of its longer two-seat cockpit, never had the slipway. This photo of an F-101B shows the hump of the IR sensor that replaced the retractable nose probe, as well as the absence of a slipway behind the cockpit. 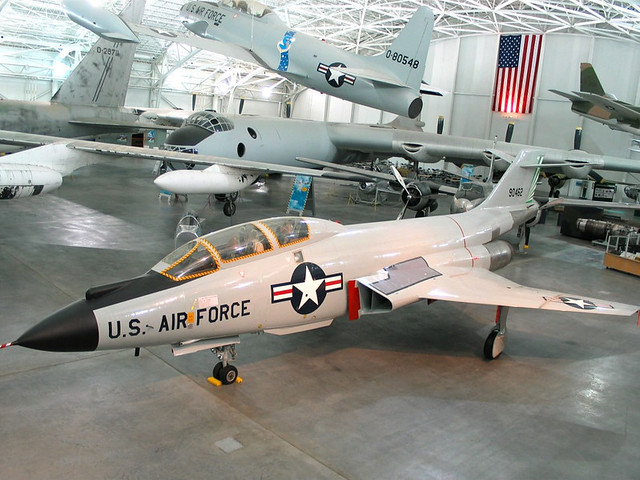 USAF F-80 Shooting Star and F-86 Sabre fighters (except for a very few modified for test programs) were not AAR-capable. Nor were the first USAF jet interceptors, the F-94 Starfire and F-89 Scorpion. The F-102 Delta Dagger, the single-seat delta-wing interceptor that became operational in the mid-1950s, did not conduct AAR on normal missions, but could be fitted with a removable refuelling probe for long overseas flights. Photos of F-102s with the removable probe in place proved hard to find, and I thank my friend Joe Coles of the aviation blog Hush Kit for coming up with this one: 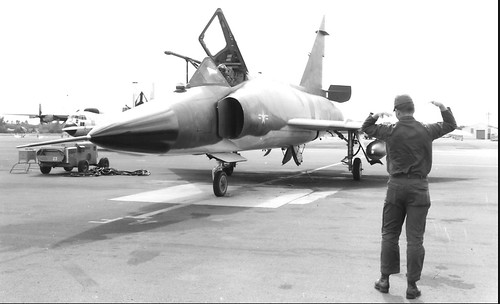 The later F-106 Delta Dart interceptor was not AAR-capable when first introduced, but was later modified with a slipway for boom refuelling.

Other USAF jet fighters and attack aircraft of the 1950s and 1960s were fitted with AAR probes for hose & drogue refuelling only. These included the F-100 Super Sabre, F-104 Starfighter, A-37 Dragonfly, and the F-5 family of Freedom Fighters and Tigers.

Later USAF jet fighters and attack aircraft, including all those in the current inventory, are fitted with slipways and can only refuel by boom. These include the F-4 Phantom II, F-111 Aardvark, F-15 Eagle & F-15E Strike Eagle, F-16 Fighting Falcon, F-117 Nighthawk, A-7 Corsair II, A-10 Thunderbolt II, F-22 Raptor, and F-35 Lightning II.

Convinced? Pre-order your copy of our book here