On land, beneath the sea and in the air, military targets are becoming harder to detect. Furthermore, target platforms are increasingly equipped with warning sensors that alert their crews to any attempts to detect, track and target them using active means. How then to track stealthy targets without being detected? To do this, only passive sensors can be used, examples being direction-finding radio, infra-red seeker trackers (IRST), or hydrophones in the sub-surface environment. The aim is to build information on the target position, speed and track, to the accuracy required to launch an attack, without using active means of detection, and the problem is that the passive sensors, in general, provide bearing, but not, directly, range. The answer lies in cooperation and data sharing between sensor platforms and then the use of derived track and position data by targeting platforms. 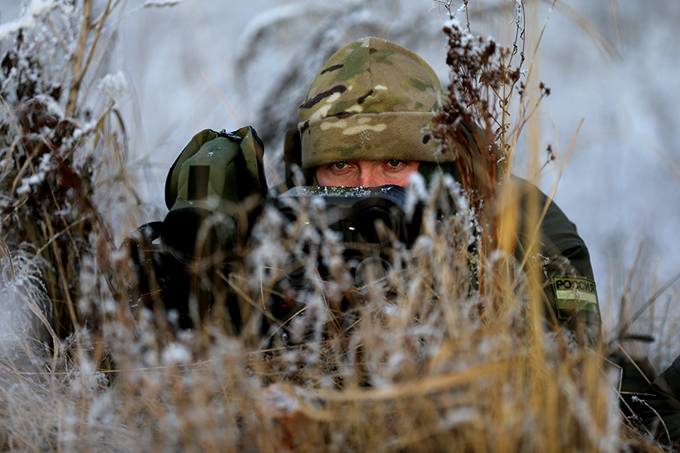 This example, involving static, or near-static operation is relatively straightforward. In a typical reconnaissance mission, a troop of recce assets penetrate enemy held territory to observe key locations, such as a river crossing, to determine whether enemy bridging assets are present, or not. Suppose that, while en route to the river crossing, the troop has deployed to a number of observation posts and is examining the way ahead from under cover. It detects an enemy recce asset on ground that overlooks their intended route. Ideally, the troop would like to have this asset destroyed without giving away its own presence, or position. The commander, using short-range secure comms asks two of his vehicles to take bearings on the target using their IR sights. Knowing their own positions via GPS, simple geometry allows the position of the enemy to be determined. This information will then allow targeting information to be provided to supporting long-range artillery, for example, without disclosing the presence of the recce troop. It is important that the baseline (the distance between the vehicles taking bearings on the enemy) is not too small compared with the range to the target to ensure accurate range information can be derived.

Similar considerations would apply in an air-to-air engagement, where the use of radar as a search sensor would alert the enemy. Once again, IR sensors would be the preferred means of target acquisition. The PIRATE IRST on Typhoon, for example, can accurately provide bearings to IR sources (including those with low radar signature) with high accuracy and at a high rate. One way of localising the target is to perform a weave manoeuvre to generate changing bearings from which range can be derived, but this does take time and risks disclosing that detection has occurred.

The Loyal Wingman concept, however, would allow IRST bearings to be rapidly generated using the same triangulation approach as in the land example, but in a much more dynamic environment. Sharing of IRST data between platforms via secure datalink, along with accurate time-stamping and sensor platform location via GPS, would allow rapid generation of targeting information, displayed to the pilots or operators, without alerting the threat aircraft to their detection, particularly if the cooperating sensor platforms are themselves stealthy. One benefit of the air domain is that the mobility of the platforms will easily allow a sufficiently long baseline between the search assets to aid rapid and accurate target track generation.

For submarines, stealth is absolutely critical, and the use of active sensors is to be avoided if at all possible. But, even using a towed hydrophone array, detection and localisation of a target is a time-consuming process, which is likely to require repositioning the submarine to determine target range. However, the use of wire-guided underwater vehicles (UV) equipped with hydrophones might allow targets to be more rapidly localised, using similar approaches to the Loyal Wingman in the Air environment, aided by direct secure communication of UV position and target bearing through the guidance wires.

Defence forces worldwide are increasingly interested in exploiting networked forces, comprising a mix of manned and unmanned platforms using data exchange between platforms to enhance their effectiveness against low signature targets. In the air sector, we can safely assume that F-22, F-35 and the Tempest project (and the electronic environment in which they are designed to operate) already anticipate elements of this capability. This type of data connectivity is less apparent in current land doctrine, and another area in which it may come to the fore is the detection and engagement of armed unmanned air vehicles, which could represent a significant threat to armoured vehicles (which tend to have relatively modest protection against top-attack threats).

In order to carry on we need donations— £8 or more a month could do a lot of good. If you’re on a budget, and want to help, even a one-off £2 donation would be very helpful. If you don’t wish to donate but would like to help us, then sharing our articles is the way! Thank you