Jim Smith had significant technical roles in the development of the UK’s leading military aviation programmes. From ASRAAM and Nimrod, to the JSF and Eurofighter Typhoon. We asked him his opinions on the Chinese H-18/JH-XX bomber concept, a mysterious project with an ambiguous designation, and unknown role, size and status.  Here’s what the article in Popular Mechanics had to say about what they referred to as the:  “While it is no B-2-style flying wing, the JH-XX has plenty of stealth features. The airplane has a flattened appearance, with built-in angles that make the aircraft less susceptible to radar. The air intakes are jagged to reduce their radar signature and placed on top of the aircraft to keep them out of sight to radars operating below the bomber. This suggests the JH-XX is primarily designed as a high-altitude penetrator. The two engine nozzles are buried inside the tail of the aircraft, reducing its rearward radar aspect, and are shielded horizontally by the large horizontal stabilizers. This lowers the bomber’s odds of being detected by infrared search-and-track sensors and infrared-guided missiles. The question is, does the JH-XX’s appearance on the cover of Aviation Knowledge mean that the “less stealthy” philosophy has won? If so, why? The flying wing is pretty much the gold standard for stealth warplanes that don’t have to dogfight, providing maximum stealth for penetrating enemy airspace at the expense of maneuverability. It’s possible that despite China’s great strides in military aviation, it still lags behind the United States in so-called “fly by wire” technology, where planes that are, shall we say “less than aerodynamically ideal,” are flyable because of computers capable of making continuous adjustments to the airplane’s control systems. Another possibility is that China is less confident in stealth as a primary means of aircraft survival and is hedging its bets by picking a bomber with supersonic capability. In 2017, The South China Morning Post reported that Chinese scientists were working on detection systems that used quantum entanglement to locate and track stealthy aircraft, bypassing traditional radars.” And the pictures: 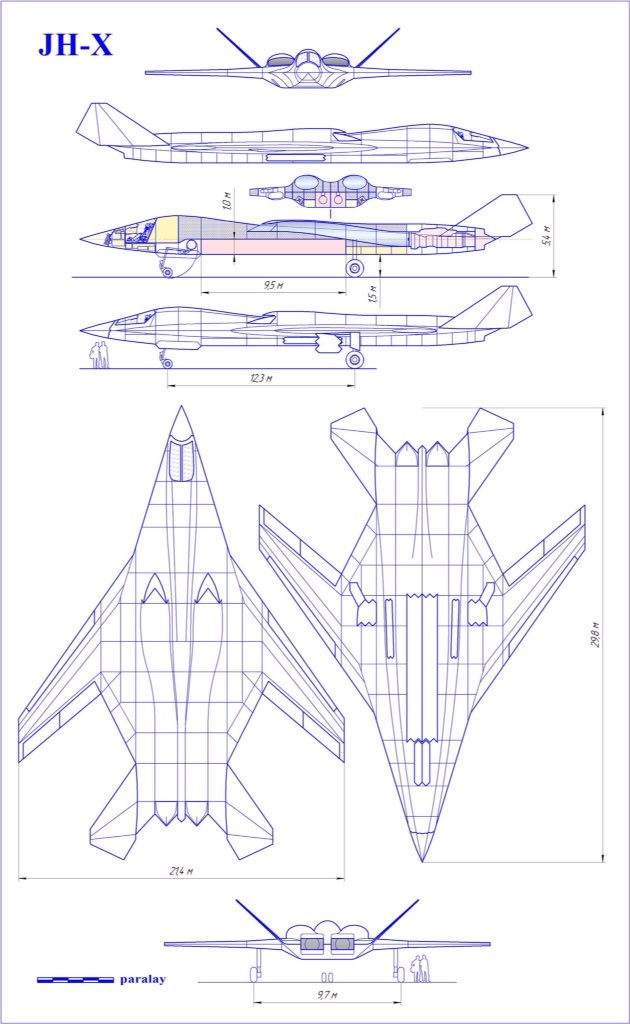 From Twitter: JH-X. Unsure of the relationship to H-18, but has a higher sweep and aspect ratio and has written dimensions.

Taking all of the above into consideration, I am assuming the aircraft is essentially a broadly Badger or Tu22M-sized H-6 replacement; and is reasonably stealthy. It is interesting that (I understand) the aircraft lost out to the H-20, which has been stated to be a flying wing. This suggests that in the selection process, stealth characteristics have been emphasised, and that the H-20 may truly be intended as a stealthy penetrating system, capable of threatening the highest value, and most protected, targets, like the B-2. In which case, given the likely high cost, it may be that there is also a requirement for a tactical offensive strike system – perhaps delivered through the J-20. One thing is clear – I do not believe a B-2-like flying wing H-20 could be supersonic as it would not be possible to trim the aircraft. Taking the overall configuration first, it’s plausible for a supersonic tactical strike aircraft. But one should perhaps expect a strategic bomber to have a higher aspect ratio for more efficient cruise. It’s quite a well packaged shape, with plenty of volume in the fuselage for both fuel and internal weapons bays. The combination of the under-fuselage shaping and the shielding of the exhausts on the upper surface by canted tail fins is a powerful nod to minimising radar signature for at least ground-based radars.

Is the H-18 supersonic or not? In general, I would expect a strategic aircraft to have a somewhat higher aspect-ratio wing, so the planform may be a compromise to deliver a supersonic dash capability. Additionally, the aircraft appears to have a relatively thin wing section, also suggesting, as indicated in the Popular Mechanics article, that it may have a supersonic capability. I do wonder about the utility of the forward fuselage chine and wing strakes, which seem to be aimed at more manoeuvre capability than would be required for a strategic platform. I am a bit ambivalent on whether the H-18 is supersonic, however. Firstly, I’m not sure that a supersonic speed is essential to deliver a strategic bombing capability. Secondly, the other supersonic bombers – the B-1B, Tu-22M and Tu-160, all use variable geometry to allow take-off at high weights with an unswept wing, and use wing sweep to reduce wave drag when supersonic. With sufficiently powerful engines, the design could be supersonic, but I wonder why this would be considered necessary, and what the impact would be on field performance, range and payload.. Will it be stealthy?  Reasonably so, assuming appropriate treatments are used, but not as stealthy as the state-of-the-art, because the design does not appear to have the same level of edge alignment and geometry management. Why is this design thought to have lost out to a flying wing? I guess the first consideration would be the view taken on technical risk. The H-18 may have been a lower risk concept that has lost out because Chinese fly-by-wire capability has matured. Also, the operational requirement may have been focussed on penetrating (stealthy) strategic capability and long range, both of which might favour a stealthier flying wing solution, incompatible with supersonic performance. On the engine installation and intakes – these are pretty unconventional at first sight. And yet, I can’t see anything to reject them out of hand, particularly for a subsonic strategic system. The engine installation looks similar to that of the YF-23, but with the intakes above, rather than below the wing. In normal flight, there’s no reason why they shouldn’t work OK, provided the diverter-less intake bumps ahead of the actual inlet have been well designed to shepherd the boundary layer away. Also, there appears to be adequate room for the inlet duct to be sinuous, dropping down within the fuselage before coming back up to the inlet face, thus screening the front face of the engine. So, with appropriate treatments, they should reduce head-on signature. What about manoeuvre? Well, in manoeuvring flight, the H-18 should be quite good, as the moderate wing sweep and the aspect ratio should give sustained manoeuvre capability. Looking at the location of the intakes relative to the change in sweep in the chine, strake and leading edge, I’d expect strong leading-edge vortices, but passing well outside the intakes. Mind you, the case for high manoeuvre capability is probably limited for a stealthy strike platform. What weapons would it carry? Whatever it needs to, I guess, as long as it can be carried internally. These days, precision strike is more what you are looking for than the nuclear solution. A hypersonic long-range ship killer? Conventional precision guided munitions? Stand-off strike capability by air-launched cruise missile? My guess would be all of the above. External weapons could still be carried, either in a permissive environment, or, perhaps, for maritime strike, where large weapons might be launched from below the radar horizon.