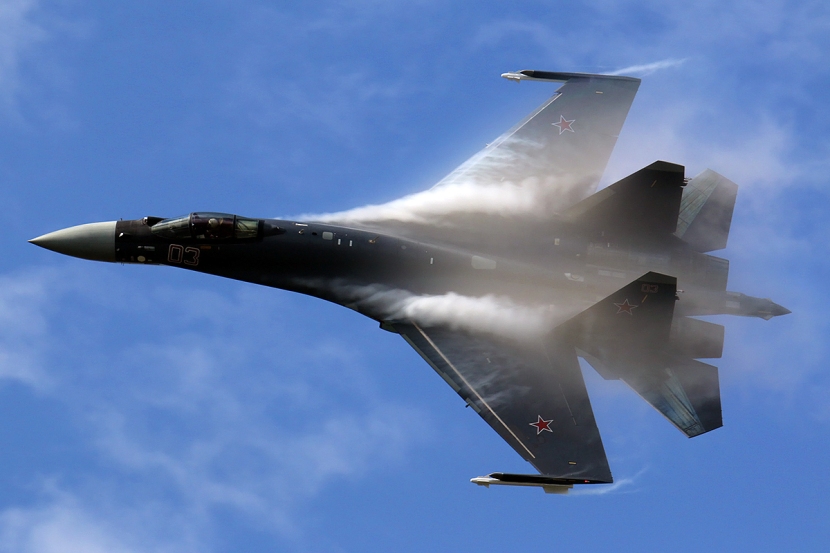 The most potent operational fighter aircraft in Russian service is the Sukhoi Su-35. We asked Justin Bronk, Research Fellow from the Royal United Services Institute (RUSI), how it would fare in combat against the formidable F-22 Raptor operated by the United States Air force.

Are there tactics which would enable a Su-35 force to take on a F-22 formation?

Simply put – no. Whilst the Su-35 does have the hypothetical capability to detect the F-22 at close ranges using its IRST and potentially the Irbis-E radar, both sensors would have to be cued to focus on exactly the right part of sky to have a chance of generating a target track. By contrast, the F-22 will know exactly where the Su-35 is at extremely long range and can position for complete control of the engagement from the outset with superior kinematics. The Su-35’s only chance would be to absorb the AMRAAM and AIM-9 shots from the F-22’s and hope that they had sufficient numbers left to attack the tankers and airbases which the F-22’s rely on post-engagement.

The Su-35 can probably out-turn an F-22 in a horizontal fight at medium and low altitudes, but the need to carry missiles and tanks externally to be effective, as well as the brute size of the Sukhoi will ensure it remains at a distinct energy disadvantage to the Raptor in terms of energy retention and acceleration at all speeds. The F-22 also will not get into an angles fight with an Sukhoi – there is simply no need for it to do so.

How do they compare in terms of BVR engagements?

BVR engagements are all about situational awareness, positioning/energy advantage, and persistence in terms of fuel and missiles. In all but the latter category the Su-35 is hopelessly outclassed by the F-22 (as are all other operational fighter aircraft). Even in terms of missiles, the Su-35 can carry up to twelve to the F-22’s eight but combat practice, especially against stealthy targets, involves firing salvos of six missiles with mixed seekers so the Su-35 only really has two credible shots. By contrast the F-22 can get much closer without being threatened so even against the Su-35S DRFM jammers, it can fire smaller salvos with much better Pk.