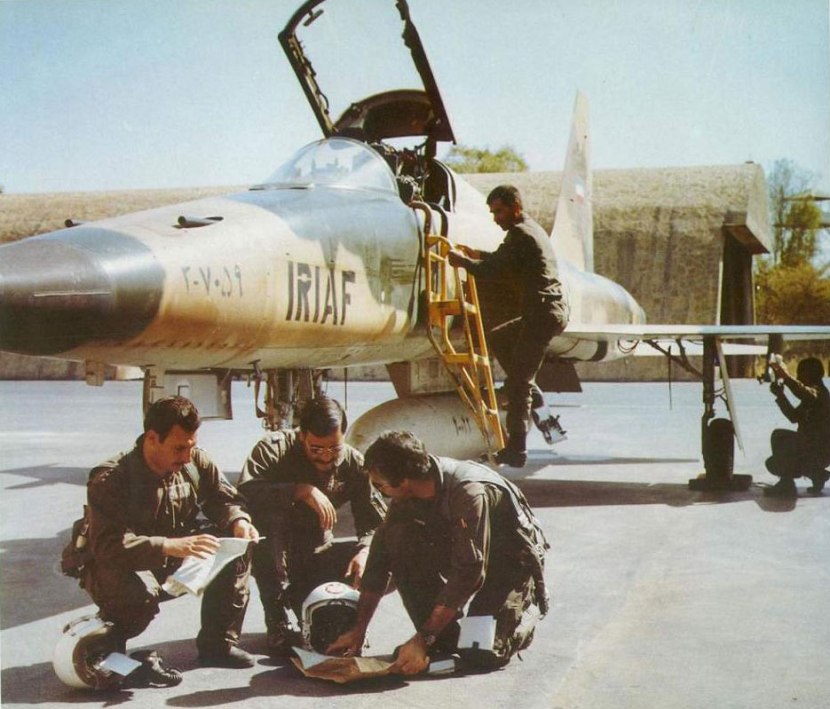 The last great air war was that between Iran and Iraq (1980-1988). Two titanic air forces armed with advanced fighters took part in aerial battles on a scale that will hopefully never be repeated. The Iranian air force was equipped with the F-4 and F-5E, but the undisputed master of the skies was the F-14 Tomcat which destroyed over 150 Iraqi aircraft.

Thank you for reading Hush-Kit. This site exists because people like you support it here.

Before the Shah’s overthrow in 1979 the USA had provided Iran with advanced weaponry, including the formidable F-14 Tomcat and F-4 Phantom II. Such complex systems required specialized training and support, an arrangement which would not last long. Iran’s new regime and the US began a sour relationship. Following the ’79 hostage crisis, a weapons embargo was in place. The F-14 was particularly potent, but also particularly hard to maintain- how long it could remain combat ready cut-off from technical support and new spares was a pressing question. When the massed forces of Saddam Hussein invaded in 1980, the issue of keeping Iran’s fighters in the sky gained existential import.

Against this onslaught from a numerically superior enemy, the Islamic Republic of Iran Air Force found itself with a rapidly-declining stockpile of weaponry and spare parts. The IRIAF’s force of Amercian-built F-4s, F-5Es and F-14s was pitted against Iraq’s Soviet MiG-21, ’23 and ’25s and French Mirage F1s. The MiG-25 was the fastest fighter in the world, and was manned by Iraq’s elite fighter pilots- and was a daunting opponent. In the attack role, Iraq had the Super Etendard (armed with a weapon two years away from becoming a household word in Britain, the Exocet) and the tough Sukhoi Su-20 and ’22.

Kash Ryan has assembled and translated a fascinating selection of pilot’s accounts from the air war that followed. Mr Ryan’s motivation for this collection of miscellaneous combat stories from IRIAF pilots is interesting:
“In an era, when the ‘Islamic Revolutionary Guards’ get the glory and money (even though they did very little fighting during the important stages of the war), it is of utmost importance to tell the stories of the real heroes who fought for their country with one hand tied behind their back.”

Although some of the stories are somewhat humdrum, the life-threatening constraints caused by the lack of materiel give a nervous edge to many of the stories. Because of the lack of precious Phoenix air-to-air missiles, for example, pilots were instructed to use the inferior Sidewinders instead. There is an exciting account from an F-14 pilot about chasing Iraqi Mirage F-1s near to the border, and (being armed only with heat-seeking Sidewinders) having to get closer and closer to the Mirages for the missiles to be able to successfully home in on the enemy’s engines and exhaust.
Several of the stories involve tankers and refuelling dramas. One of the pleasures of this book is seeing tanker aircrew getting their due recognition, instead of as in many such accounts being dismissed as “flying gas station attendants.”

“F-14 instructor, MiG-25 killer and all round gentleman”
There’s a gripping account of a sortie where F-14s were flying escort duty, protecting the ship tankers that Iran relied on for its economy. The F-14s are already low on fuel when they’re alerted that thirteen Iraqi bogies are incoming. The grim decision is made to protect the ships at all cost, and to fly till the fuel runs out. Once the fuel is gone the procedure is for the radio/weapons operator to eject first followed by the pilot. While searching for the Iraqis they’re told twenty air-to-air missiles have been fired, so they use up precious fuel jinking to avoid them. Fortunately for them, the Iraqi tactics at that time were for aeroplanes to fire their missiles only when advised by ground control, so none of the 20 missiles hit. Luckily a KC-707 tanker appears in the nick of time to refuel the F-14s.

Click here for ‘Werner Herzog’s guide to pusher aircraft
On another occasion, a flight of F-14s are low on fuel but are warned of approaching Iraqi jets. The KC-707 radio operator deals with the problem cunningly, by faking radio calls to non-existent approaching armed F-4s. The Iraqis take the bait and turn back. Another tanker story concerns a reconnaissance F-4 being hit by anti-aircraft artillery, then unable to hold fuel so flying home still sucking on the KC-707’s teat.

Like many pilots, the IRIAF pilots had their superstitions, and dreams and premonitions were taken seriously. One story has a pilot being telephoned by someone ordering him not to fly as a KC-707 tanker pilot has had a bad dream about his being shot down. The F-14 pilot thinks it’s another pilot playing silly buggers, so ignores the call, and is then told off when he returns, unscathed, from his mission.
The book is the stronger for being an account of the everyday stresses and emergencies. For instance, one story concerns a bombing raid that, for a few awful hours, is believed to have gone wrong and become a friendly fire incident.
The quiet bravery of the airmen comes across strongly as in this anecdote that ends:
“A dozen miles or so closer to our home base, we began to lose hydraulic pressure, causing the plane to roll on its side. At that point, we knew it was time to punch out. Though I was glad we’d gained altitude, it certainly wasn’t a smooth ride. In the end, I had to endure two months of hospitalization before I could return to the flight line. Though I suffered great pain by being ejected at 15,000 feet while inverted, I survived and served for another 20 years or so.” 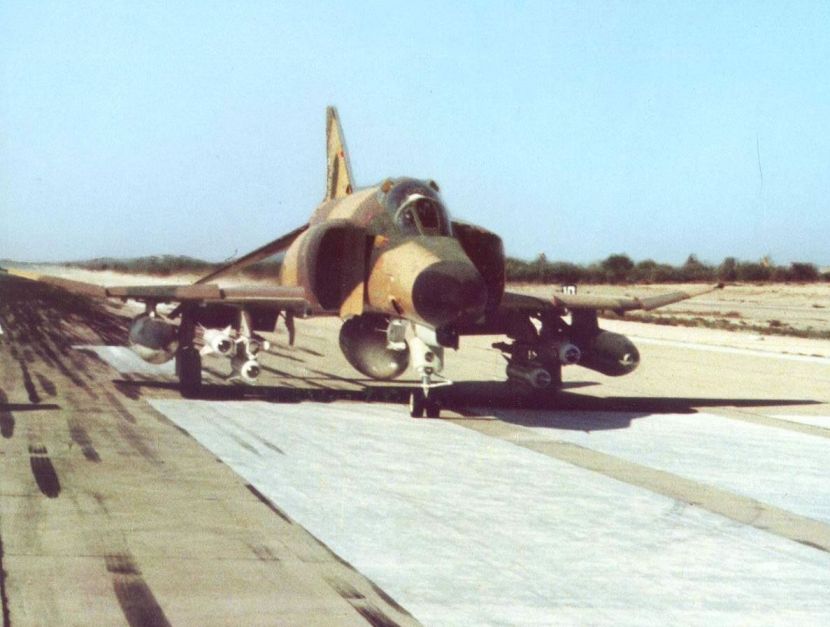 Although the patriotism of the air force personnel comes across strongly, this is not true for all since there is a footnote to one story:
“Note: 1Lt Rahman Ghana’at Peesheh, the WSO on this very mission, later defected to Iraq as a newly minted Major with his armed F-4E. His own WSO suffered years of captivity and torture in Iraq for refusing to cooperate with the enemy.”
There are several vignettes that stand out, and bring immediacy to the accounts. One pilot recalls seeing, during a surprise bombing raid, Iraqi AAA crew running from their volleyball court to the guns. One pilot describes another as “an F-14 instructor, MiG-25 killer and all round gentleman.”

I’m not sure if this says more about how Farsi translates into English, or Iranian air force culture, or the nature of the situation- but the pilots have something distinctly old-fashioned about their way of talking. They frequently come across as impressively understated- displaying a kind of nonchalance and black humour reminiscent of the pilots of the Royal Flying Corps.

Another story recounts a member of the ground crew offering to sacrifice a lamb before a raid, to bring them luck, probably something that doesn’t happen in the RAF.
My main criticism of this book is that several of the stories are simply non-anecdotes that leave the reader scratching their heads wondering what the point of the story was. Although it includes a useful glossary, the book would also benefit from a potted history of the conflict and/or a timeline. It would also benefit from a more thorough proofread (judge not…) and a little finessing.
On the whole, this is an enjoyable book, and one that throws light on a section of a conflict now almost forgotten outside the Middle East. Perhaps the last word should go to one of the Iranian pilots: “Those were the good old days. Tough but memorable.”

Thank you for reading Hush-Kit. This site exists because people like you support it here.

Reviewed by Torquil Arbuthnot, Literary Editor for The Chap magazine.

You should also enjoy some more of our articles: There’s a whole feast of features, including the top WVR and BVR fighters of today, an interview with a Super Hornet pilot and a Pacifist’s Guide to Warplanes. Was the Spitfire overrated? Want something more bizarre? The Top Ten fictional aircraft is a fascinating read, as is The Strange Story and The Planet Satellite. The Fashion Versus Aircraft Camo is also a real cracker.