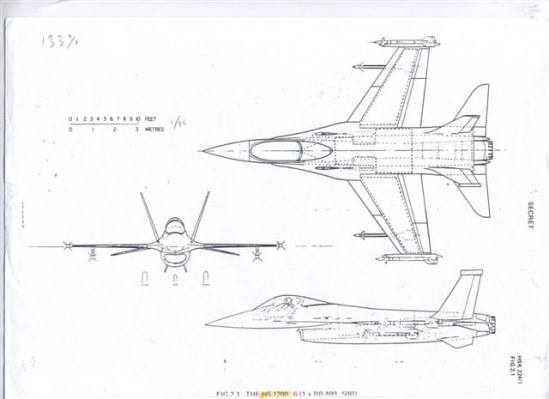 In the mid 1970s, the British company Hawker Siddeley developed a concept for a medium-weight fighter for the Royal Air Force strongly influenced by the US’ F-16. This series of ‘P.1200’ concepts came from the company’s Kingston division. Though considerably larger than the F-16, most of the P.1200 designs featured a similar air intake, canopy, leading edge root extensions and general wing configuration.

Strangely the P.1202 design was offered with either two RB.199s or a single RB.431. The RB.199 was then in development for the Tornado, but as experience would show with the ADV, it was not a suitable fighter engine; it was tailor-made for the low-level regime and was a poor performer at the medium and high altitudes that an air superiority fighter needs to operate in. The RB.431  study was essentially a Pegasus with reheat and no vectored thrust nozzles, though powerful it again seems an odd choice for a supersonic fighter.

The initial design, from November 1975,  featured a canard layout with square shoulder-mounted intakes, similar to the later Saab Gripen. Further designs utilized a conventional tail and dorsal intakes. Internal armament for the early P.1200 designs was two 27-mm Mauser cannon. Air-to-air armament was expected to be AIM-9 Sidewinders and SkyFlash medium-range missiles. In the secondary air-to-ground role it could have carried four bombs in a low-drag recess.

By 1977 the aircraft had become even more strongly influenced by the F-16. Both single and twin vertical fin configurations were tested. The twin-tailed P.1202 pictured above, would have had superior high alpha performance to the F-16, and given a suitable engine, would have made a formidable dogfighter.

To keep this blog going- allowing us to create new articles- we need donations. We’re trying to do something different with Hush-Kit: give aviation fans something that is both entertaining, surprising and well-informed. Please do help us and click on the donate button above – you can really make a difference (suggested donation £10). You will keep us impartial and without advertisers – and allow us to carry on being naughty. Once you’ve done that we hope you enjoy 10 Incredible Soviet fighter Aircraft that never entered service. A big thank you to all of our readers.