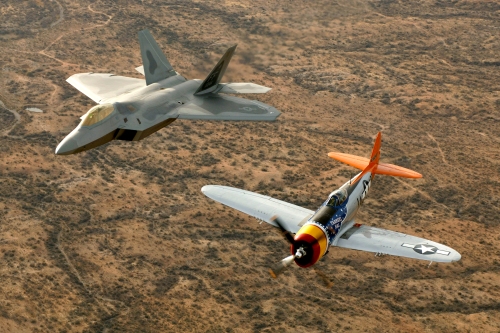 Vice magazine’s Bruno Bayley takes a look at what an aircraft says about the nation that produced it.

AUTHOR’S DISCLAIMER: Two things to note – both probably more than obvious: This is not meant to be a conclusive look at national output of aircraft. Each country, had for the one aircraft picked below, an opposite, which would in no way suit my argument. Secondly, the exercise is almost by definition skirting the edges of xenophobia, and will draw upon some clichés. But what fun is revisiting the Second World War’s aircraft without a healthy slosh of xenophobic blinkeredness?

This propaganda poster features British and Soviet aircraft shooting down a Luftwaffe Ju 87, with a caption in Persian for distribution to Iran.

There is a well-worn, and possibly false, anecdote about the Soviet nail factory that met its quotas by producing a two-ton nail. Or maybe that was just a lie my history teacher told me. Either way, it sort of sums up the target obsessed insanity of Stalin’s Russia. The Il-2, possibly more perfectly than any other aircraft in this run down, sums up the mentality of the regime that created it.

Produced more numerously than any other aircraft in the war, the Il-2 was the primary Soviet ground attack weapon. Ugly, heavy, crude, and easily mass-produced it suited the appalling conditions of the Eastern Front as well as the staggering requirements of a nation already reeling from the initial success of Hitler’s Operation Barbarossa.

In a slightly callous fashion, that many associate with the wider Stalinist mentality (not without just cause) the pilot was ensconced in thick armour plating, as was the engine, while the rear gunner was left fairly exposed, often equipped only with a standard issue machine gun on a rope bungee. It should be noted however, that the Il-2 was designed as a single seat aircraft and the rear gunner position was added to try and stop crippling losses.

Though loses were heavy with Il-2 units, quite possibly a result of the Soviet policy of not returning to base with unspent ammunition, their impact on the Eastern front has long been attested to. Not least at the typically grim Battle of Kursk where they claimed a great many German tank kills.

If any aircraft sums up the mass-production obsessed, brutal, and grimly effective nature of Stalin’s Russia it is the ‘hunchback’.

Built expressly to use the Merlin engine that would also equip greats of the war like the Supermarine Spitfire, P-51 Mustang, Avro Lancaster, and the de Havilland Mosquito among others, the Hurricane cruelly lived in the shadow of the sexy Spit. However, in spite of being more portly and far less lauded, the Hurricane racked up over 60% of the RAF kills during the Battle of Britain, went on to be a prestigious tank-buster in North Africa, night-fighter, and carrier and catapult launched naval fighter – known as  Sea Hurricanes and Hurricats and  respectively.

The Hurricane embodied the ballsy pugnacity of war-time Britain, frankly outdated as a design by the start of the war, its blending of inter-war and modern construction techniques made it easier, cheaper, and faster to build (and repair) than all metal craft like the Spitfire (and made it more battle-resistant). Its rear fuselage draped with doped fabric (as were the wings on some versions) it didn’t eat into the Nation’s meager supply of desperately rationed metals. If any craft summed up the stiff upper lip, ingenuity under pressure, and slightly stuffy geography teacher air people associate with 1940s Britain, this was it.

Perhaps the most staggering thing about the Luftwaffe in the war, was the volume of wasted potential – in both leaders, pilots, and most crucially, machines. The Me 262, the first jet fighter to enter widespread service (the very first had been the He 280), typified both the exceptional potential of Germany’s scientists and designers as well as the insane impact of political meddling in Hitler’s Reich.

First conceived in 1938, and prototyped in 1941, it was only in the later months of 1944 that Hitler showed enough faith in the 262 to push it into full-blown production. He, and under him Goering, had spent the previous years insisting on the mass production of tried and tested models like the 109, 190, Ju 88 – all of which were retro-fitted endlessly to fulfill any task – ultimately to the detriment of the original aircraft. As well as that, an obsession with producing troublesome new ‘defensive’ bombers, like the Do 217 hampered jet fighter production.

Had the 262’s almost miraculous potential to repel the round-the-clock bombing offensives of the USAAF and the RAF been recognized earlier, things may well have been different. Even once operational, many of these excellent fighters were modified to carry almost ineffective bomb loads, or to house heavy cannon for ground attack roles. In the last days of the war, the few operational Me 262s formed one of the most elite air units of the war – Jagdgeschwader 44, headed by the pre-eminent ace Adolf Galland and made up of numerous top aces of the Luftwaffe. By the end of the war, only around 100 of the 1,433 Me 262s built had seen combat. The Me 262 was a testament to a system plagued by meddling and misguided policies spurred on by blind optimism and a refusal to face facts.

Many Me 262s were produced by Slave labour. It is rumoured that some Me 262 workers sabotaged the engine components by urinating on them.

As my grandfather used to say – what’s the difference between toast and Italians? The answer being that you can make soldiers out of toast. And the chortle goes around. True enough, the Italians had a rough time of it in the war, but their  Macchi C.202, or Folgore (‘lightning‘) was about the only plane that could line up with the Spitfire in the ‘Miss Pretty Aeroplane of the War’ pageant. Superbly good-looking, with the cockpit sat far back on the fuselage. Possibly the most stunning feature of the Folgore was its wings. Not in that they were especially pretty in most aspects, but in that one was a whole eight inches shorter than the other, a design quirk that offset the propeller torque – a trick that Reggiane did it as well with the Re 2005.

But true to those stereotypes, the beautiful fighter was under-armed, and though a stunning piece of kit, never had the impact it could have on a fashion runway. In the Mediterranean theatre it outclassed the underwhelming P-40 Kittyhawk and out-flew the Hurricane, but was somewhat late to the party in North Africa, where it could have provided solid fighter cover for the embattled Italian troops.

The blame for the Folgore’s lack of impact could arguably be placed at the feet of the Italian air industry overlords who ignored the evidence (Italy having won the world speed record in 1934 with its in-line-engine-powered Macchi C.72) and focused on heavy duty radial engined fighters, rather than embracing the often speedier, in-line, options. The Folgore was destined to be a beautiful, iconic, and essentially irrelevant ghost at the air war ball.

The most iconic American fighter of the war, the P-51 Mustang, was also rather exceptional by American design standards. It was originally built for the RAF, and at first a rather disappointing product until the introduction of the Rolls-Royce Merlin engine. It was a sleek, almost pretty, aircraft (far prettier after its upgrading to a bubble cockpit) with an in-line engine. Aside from the Airacobra / Warhawk families and so on – all generally below par as purebred fighters – the typical American approach to fighter aircraft was based around heavy, powerful, radial engines. The planes themselves  also tended to be heavy and tough.

Machines like the Corsair and the Hellcat (and Wild/Bearcats) conformed to this type well. The P-47 thunderbolt however was the epitome of that attitude and reflected America’s wealth in both financial and material terms.

“Tubby and verging on ugly, it developed a reputation for taking punishment”

It was the heaviest and most expensive single (piston) engined fighter of World War II. Few ‘single piston’ aircraft ever surpassed the ‘Jug’ regarding weight, with the exception of the experimental Boeing XF8B-1 and the post-war Eagle-powered Wyvern and  Douglas A-1 Skyraider. Tubby and verging on ugly, it developed a reputation for taking punishment, and the nickname the ‘Jug’. Though surpassed by the Mustang as a bomber escort, the Thunderbolt’s armor plating, ruggedness, and ability as a weapons platform made it an exceptional ground attack aircraft. There is a tale of a National Guard P-47 over-shooting a runway in 1946, going through a wall, and the pilot then climbing out and trotting off. Pretty sturdy.

Bruno Bayley is the Managing Editor of Vice Magazine. From an original idea by Juanita Franzi. Juanita’s excellent aviation illustrations can be seen at: http://aeroillustrations.com/