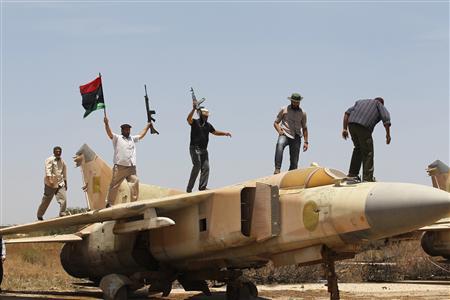 We saw the images on the television screens as we sat at the baklava café in Benghazi. The frenetic movements of the young men in half khaki suggested that some distant event was occurring, but we remained rooted in our casual conversations as we drank our macchiato and then the convoy departed to the airport. As the propellers beat and wheels came up, we were leaving far behind the displacement camps visited earlier that morning, where families conglomerated and sat ashen faced and introspective, having fled after the abuses perpetrated by their youth during the siege of Misrata. And soon land unfurls into the sea – the Bay of Sirte.

I sink against my seat, rest my head against the scratched window, and flick an antique, silver ashtray cover back and forth in time with my thoughts. The aeroplane is borne aloft into the cloudless blue sky, dangling from unseen strings, as the sun creeps along the length of the now gleaming wing, up and over the surf, the breakers and the rolling waves so very far below. Time slows down, and the delegation is soon snoozing like tabby cats in the warmth from the windows and the soothing drub of the engines. I, the other hand, am impatiently awaiting for the nose to nod and signal our descent. But we do not go down when we are supposed to go down, and now our aircraft is spiralling up and round, and pointing back out to sea. One among us is wakened and called to the cockpit, returns shaking his head and with a puzzled air. “I am not sure it can be true, but they say that Gadhafi is dead. Tripoli is celebrating and shooting volleys in the sky. The brigade from Zintan is similarly marking the occasion at the airport and it is not safe to land.” Now the pilot’s voice trills in, passengers stir and whispers pass around the cabin – our diversion to a new destination is confirmed.

“If this were the way the world ended I couldn’t give a bean.”

Palpable excitement meets with frustration among our fellow travellers – they wish they could be in Libya now to revel in this moment. Others are worried; they lack the necessary papers for Europe. An unattended sense of distance overtakes me. If this were the way the world ended I couldn’t give a bean. I will go wherever this plane will take me. When the cliffs and castles of Malta loom into view against a swelling background field of blue, a feeling of happiness and sweetness washes over me. We land in Valetta in the middle of the afternoon, and all is well with the world.