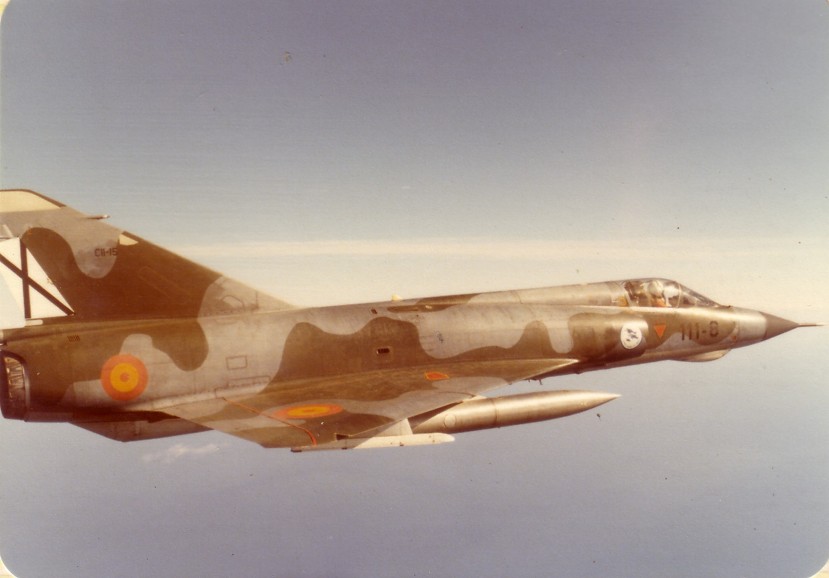 Now a crack aerobatic pilot, Gonzalo O’Kelly was once one of the best fighter pilots in the Spanish air force. During his time in the Ejército del Aire he flew the Mirage III, a formidable and beautiful fighter of French origin. In the third of our five part Mirage special he rates the Mirage’s weapons, shares the hairy tale of stalling in a mock dogfight and describes flying against the US Navy’s 6th Fleet.

Save the Hush-Kit blog. This site is in peril, we are far behind our funding targets. Our site is absolutely free and we have no advertisements (any you see are from WordPress). If you’ve enjoyed an article you can donate here.

Were the weapon systems effective?

“Well, in those years nobody had weapon systems, maybe the Phantom was the exception. We had weapons and ways of using them. Our only ‘modern’ weapon was the radar guided missile Matra 530. We could carry just one in the aircraft belly hard point. It was big and heavy, and we didn’t like to fly with its added drag.

But the Cyrano II radar average effective range of detection was no more than 15 nautical miles, and if flying below 10,000 ft the ground clutter made it almost impossible to see any radar returns – so it was not a really effective weapon. We trusted our eyes much more than the old Cyrano II; we had two Sidewinders AIM-9B, two powerful cannon and we mastered their use.”

What was the most frightening mission you flew?

“I had a very frightening mission — but was it my fault. The Mirage III was a noble steed, though you had to be careful when flying at the envelope limit. It was a one-on-one dogfight training flight in my Initial Training Course. I had about 25 flying hours on the type. Remember what I said before? The Mirage offered really no mercy to rookies.

I was flying on a two-seater Mirage IIID, with my instructor in the back and my sparring partner was our Squadron Chief, Lieutenant Colonel Quintana who sadly passed away a couple of years ago. I, of course, wanted show to off my flying skills, but my aircraft had other ideas.

The first engagement began with me 2,000 ft higher, and on his 5 o’clock. Both of us were at about 450 kts. I called “engaged” and he broke hard towards me. I had the advantage in speed and altitude so I let him pass left to right in front of me, and pulled up to exchange speed for altitude while turning right towards him. I still had a good position – and the advantage, so next our cross was almost equal, with both trajectories crossing with an angle of around 60 degrees. In this cross he already had his nose down.

I still was turning hard right with not too much energy but when he passed again in front of me, I decided to change my turn to the left to get behind him. It was a good manoeuvre with enough energy for softening the turn but that young lieutenant maintained the G’s. It looked like my aircraft agreed with me for a couple of seconds, and then suddenly changed its mind and gave me the most vicious self righting turn while stalling, and then going into a steep spin.

I controlled the spin while the instructor yelled at me in the interphone, and recovered after two rounds in which I lost 14,000 feet of altitude! The aircraft wanted to give me final lesson for the day, and promptly gave me a compressor stall to fight after the spin recovery. This at least, was easy: throttle back to idle and very gently, again forward. To understand how fast you could lose altitude in the Mirage III, we began at 35 angels (35,000ft), and recovered the compressor stall at 8,000 feet.

Then back to the base, to report the compressor stall to maintenance, and enjoy a particularly ‘nice’ post briefing.”

Which aircraft did you fly against in dissimilar type combat training?

As Spain was not yet in NATO, we were limited to dissimilar with Phantoms from the 12th Wing, based in Torrejón Air Base, and Mirage F1 from the 14th Wing in Albacete Air Base. Once a year we took part in exercises with the US Navy 6th Fleet.This gave us the opportunity of having some very boring dogfights with the Tomcats.” 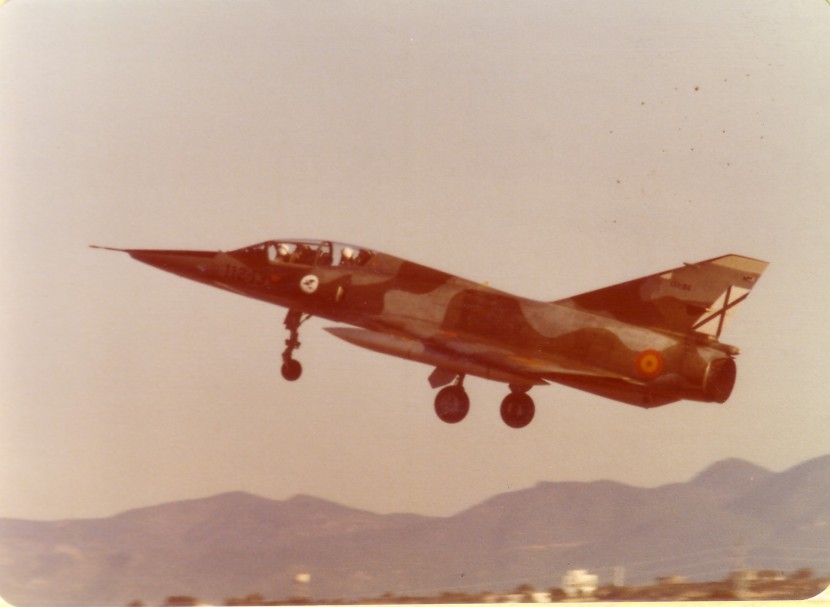 “Regarding our exercises with the US Navy’s 6th Fleet, we always played the bad guys trying to attack and sink the carrier, but it was almost impossible. Think of 20 destroyers and cruisers around, all of them full of long and short range guided missiles -and leaving no hole to go through. So at the end of our attacking run, we used to meet a couple of Tomcats, but maybe they knew we had been killed three or four times before arriving there, so they didn’t seem eager for a bit of rock ’n’ roll. A couple of turns with their wings fully extended, and that’s all folks. Anyway, we were at low altitude.I don’t know why they never planned for real dissimilar dogfights with us as part of the exercises. They were not interested. Pity. You know what navies are like though…”

“The Mirage F1 was a completely different thing. They had a lot of advantages over the Mirage III: Better engine, 7200 kgs against our 6700; the aircraft was a ton lighter; it had no need for external tanks so always flew in a full clean configuration; automatic slats and flaps; and better radar and a HUD. Only the weapons were equal: Sidewinders and guns. To dogfight them was real hard work for us. We had to emphasise mutual support to stop them entering firing range. If we reached an advantageous position on one of them, they only had to zoom up and comfortably wait up there for us to nose down and generate sufficient speed to follow. Our only resource was the diving acceleration, so the usual tactic was fly towards them at full throttle, kill the speed to get a position to fire the Sidewinder and escape diving like hell. I remember the F1 pilots complaining because we always tried to avoid close dogfight. Our answer always was: give us your engine and your automatic slats/flaps and we’ll stay for close dogfight.” 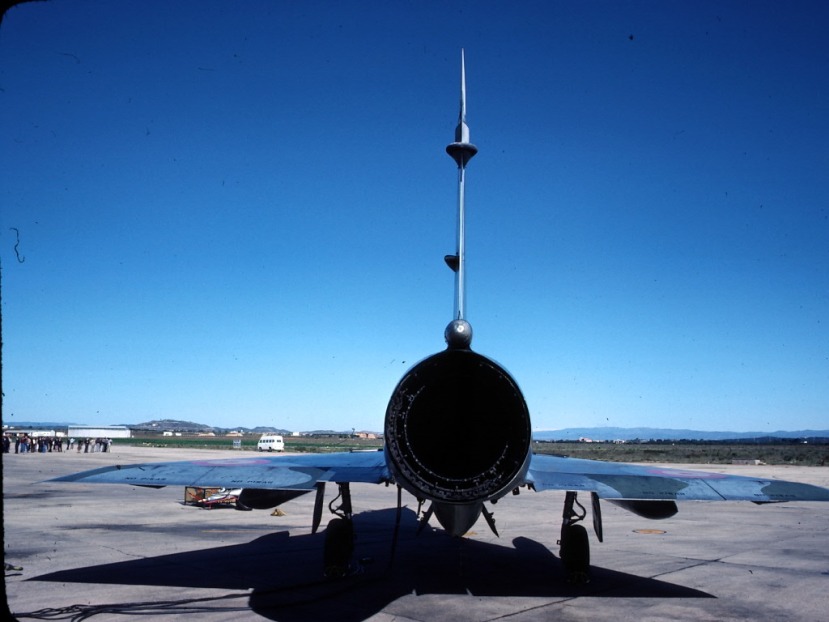 Thank you for reading Hush-Kit. Our site is absolutely free and we have no advertisements (any you see are from WordPress and not us). If you’ve enjoyed an article you can donate here. This site needs donations to keep going, thank you.

Have a look at How to kill a Raptor, An Idiot’s Guide to Chinese Flankers, the 10 worst British military aircraft, The 10 worst French aircraft,  Su-35 versus Typhoon, 10 Best fighters of World War II , top WVR and BVR fighters of today, an interview with a Super Hornet pilot and a Pacifist’s Guide to Warplanes. Want something more bizarre? The Top Ten fictional aircraft is a fascinating read, as is The Strange Story and The Planet Satellite. The Fashion Versus Aircraft Camo is also a real cracker. Those interested in the Cold Way should read A pilot’s guide to flying and fighting in the Lightning. Those feeling less belligerent may enjoy A pilot’s farewell to the Airbus A340. Looking for something more humorous? Have a look at this F-35 satire and ‘Werner Herzog’s Guide to pusher bi-planes or the Ten most boring aircraft. In the mood for something more offensive? Try the NSFW 10 best looking American airplanes, or the same but for Canadians.