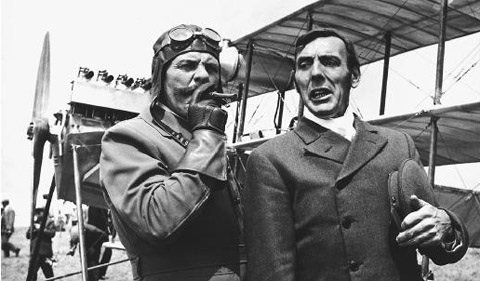 “Patriarchy you say? Bloody silly name for a yacht if you ask me.”

According to the dreadfully weighty Oxford English Dictionary a ‘cad’ is ‘a man who behaves dishonourably, especially towards a woman’ (though according to Gimlet’s Book of Cliches, ‘an introduction that starts with the dictionary definition of the subject is unacceptably lazy‘). Most cads in popular culture tend also to be upper class or at least feigning such a station. Of all the social types one might run into in polite society, the cad seems to be the most suited to personal aircraft ownership as he is the most likely to wish for a form of transport with the panache to impress a filly, require a speedy getaway from an enraged suitor, and to be personally unaware of the ludicrous vulgarity of such a conveyance. Here are some aeroplanes that are perfect for the kind of man that would leave a woman feeling like jumping in front of the King’s horse. 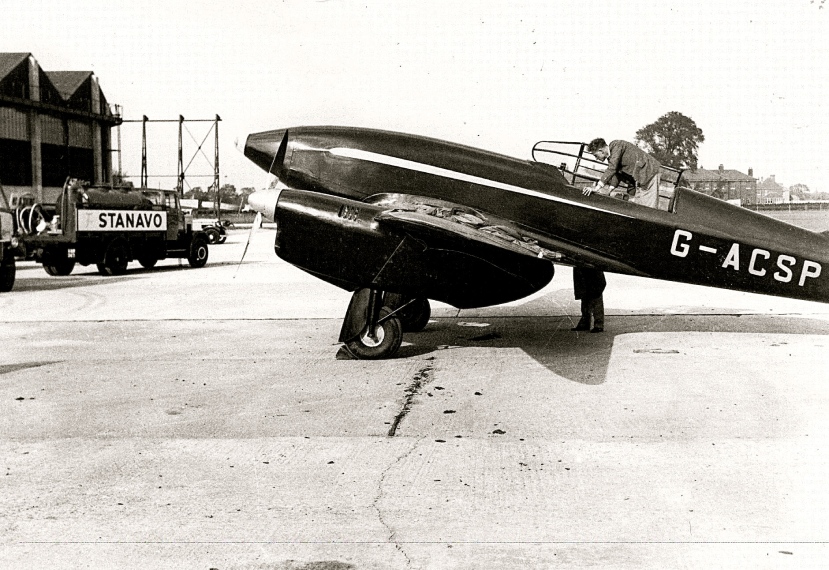 If any aircraft were ever designed to sidle up to a lady and spirit her away to potentially dubious climes it would be the original de Havilland Comet. It is undeniably attractive in a flash kind of way, English, very fast for its time (it was a racer after all) and boasts that dreadfully important second seat. In real life of course it was quite successful, winning the 1934 MacRobertson England to Australia air race (no true cad would ever have had the fortitude or strength of character to undertake such a journey). One of the three Comets entered was flown by Amy Johnson and her husband Jim Mollison. Painted black with a gold cheat line and christened ‘Black Magic’, it looked fantastic – in a sleazily aristocratic kind of way. The arrogance of starting a company name with a lowercase letter is pretty caddish too, and has forced many an aviation writer into adopting a weird sentence construction. 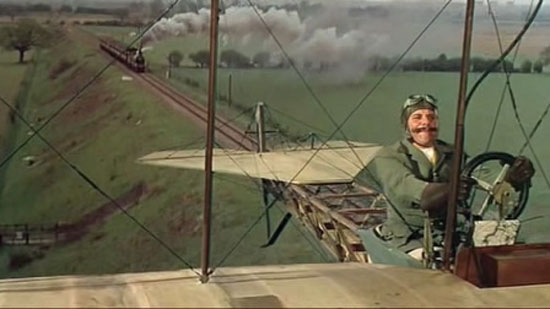 Ivor the engine puffed and panted to try and catch up with the man who had snatched his iPhone.

“Blast!”
Terry-Thomas portrayed the definitive screen cad on many occasions, most appropriately for our purposes in the form of Sir Percy Ware-Armitage in the bizarre 1963 film ‘Those Magnificent Men in their Flying Machines’. His aircraft is a largely authentic replica (the engine is a 1930s Cirrus of considerably greater power) of the Roe IV triplane of 1910 and flies to this very day with the Shuttleworth collection. As the vehicle of a cad it is somewhat lacking in potential as it doesn’t even have a seat for a paramour and the somewhat exposed position for the pilot requires him to discard his Savile Row suit for rather more robust clothing. In the film it is outrun by a train, and with a quoted 45 mph top speed this is hardly surprising. 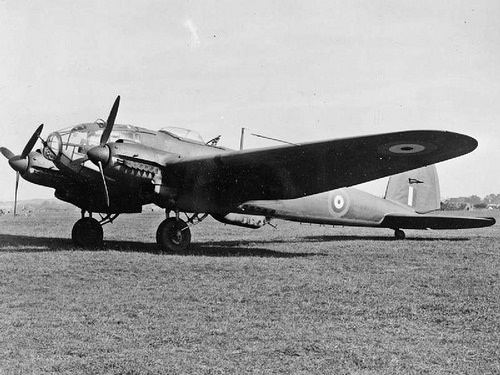 I’m not sure this paintjob is really ‘me’

“Who would pay a million dollars to have me killed?“
“Jealous husbands! Outraged chefs! Humiliated tailors! The list is endless!“
Though James Bond has the demeanour of a murderer in a hotel bar, he is beloved by boring men around the world as the ultimate cad. He certainly behaves dishonourably towards women (and everyone else to be fair). His creator, Ian Fleming, was decidedly caddish. His career at Eton came to an abrupt end when his housemaster, who disapproved of his ‘attitude’ as well as his ‘hair oil, his ownership of a car and his relations with women’ (sounds like jealousy to me) persuaded his mother to send him to Sandhurst. The attitude and relations, not to mention the hair oil, must have been pretty serious stuff as Fleming had been crowned Victor Ludorum two years in a row and he edited a school magazine ‘The Wyvern’. His subsequent career at Sandhurst also came to an abrupt end for he left in 1927 after contracting gonorrhea.  What a cad.
Between then and his subsequent fame as a writer he worked in Naval Intelligence during the war and came up with an underhand scheme named, with some accuracy, ‘Operation Ruthless’. The plan was to use this aircraft, a captured Heinkel 111 in a daring attempt to obtain an enigma code machine for the British. The idea was that the captured Heinkel would trail behind a genuine Luftwaffe bombing raid returning to France and ditch in the channel after sending out an SOS. The Germans would send a rescue E or R boat, whereupon the bomber’s crew would kill them and take the boat, with its invaluable enigma coding machine, back to Britain. Fleming was desperate to be one of the crew but because of his knowledge of code-breaking activities at Bletchley Park (where publishers cracked the code of creating best-selling books about the World War II intelligence effort) it was deemed too dangerous to let him go. Ultimately Operation Ruthless was never to happen and Fleming was never to know whether his plan would have worked. Luckily he had a ludicrously successful writing career and several affairs with married women to look forward to.
__________________________________________________________________________________________________________________________________
Myasishchev M-50 ‘Bounder’ 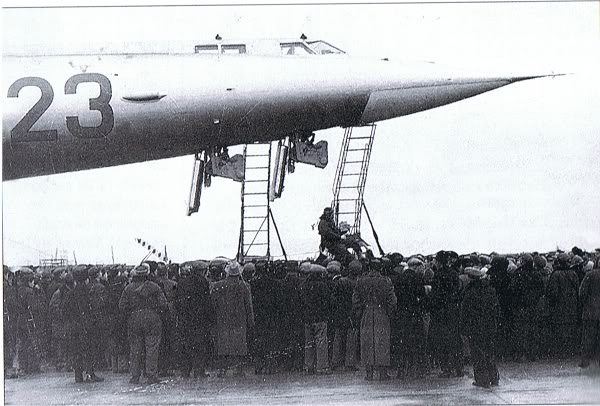 “Hurry up damn you! Lord Walmington found me with Lady Walmington and he’s spitting tacks.”

“You sir, are a cad and a bounder!”
“No sir, I am a cad and I own a Bounder”
With its 1200 mph top speed, the most caddishly codenamed aircraft ever to fly would serve admirably to whisk any rake away from a sticky situation such as a furious husband or a prohibitively large bar tab. However the catastrophically huge number of roubles required to purchase an experimental supersonic nuclear bomber, let alone fill it with petrol, would seem to limit its potential suitability to all the but the wealthiest cad. Or, one supposes, a Soviet test-pilot cad. 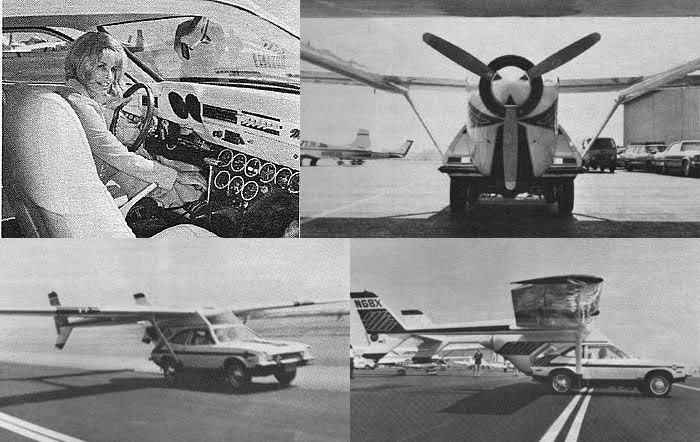 Images photocopied from a magazine found in a binbag outside a jumble sale.

“There’s a useful four letter word, and you’re full of it“
The Bond villain Scaramanga not only takes advantage of women but then shoots them if they displease him like the terrible cad he is. Scaramanga was gleefully played by Christopher Lee (who, oddly, was Ian Fleming’s cousin) in ‘The Man with the Golden Gun’ and at one point in the film gives Roger Moore’s Bond the slip in a car that converts into an aircraft. The car is an AMC Matador X which is notable for its appalling looks but, sadly, does not actually turn into an aeroplane – it was a model, flown at Bovington Camp in Dorset (home of the excellent Tank Museum) rather than Thailand where it’s supposed to be. 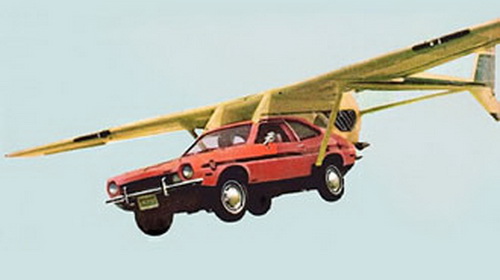 “Arghhhhhhhhhhhh!” The reality of the situation sinks in. 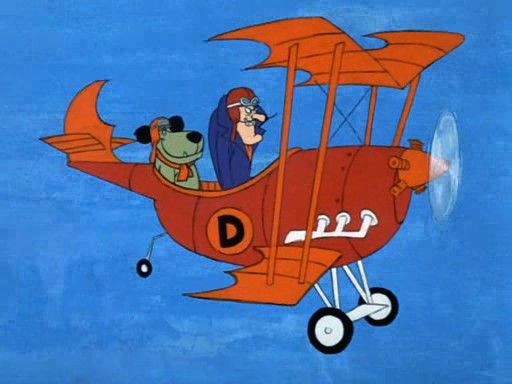 Centre of gravity issues were remedied by the inclusion of a gruff laughing dog. 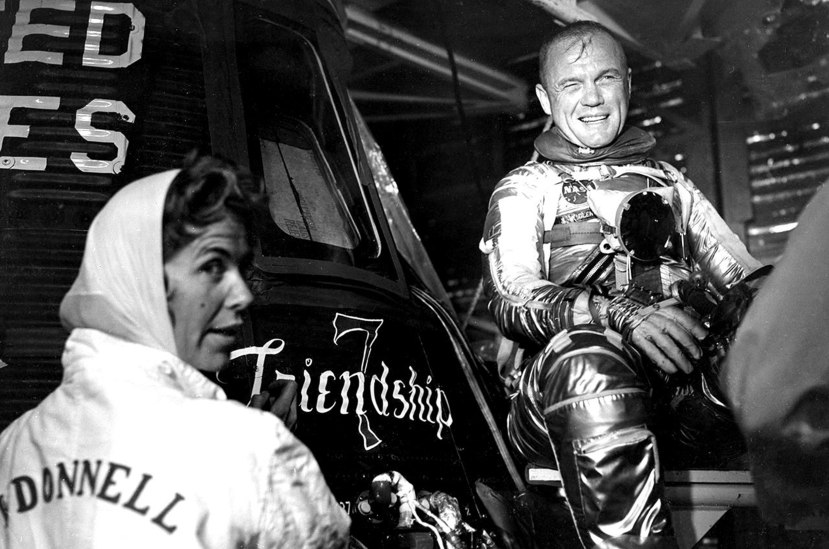 The McDonnell Mercury capsule was guarded by the middleweight boxing champion Helen Dumont.

“I’m talking about keeping our pants zipped and our wicks dry around here!“
Actually leaving the Earth’s atmosphere would seem to be taking escape from the consequences of one’s caddish behaviour to an extreme level. Yet it may have been a strong motivational factor for at least half of the six Mercury astronauts to actually fly into space. Whilst the pillar of morality John Glenn exhorted the others to keep their pants zipped it appears now that it did little good. Required in the name of propaganda to outwardly maintain Stepford-wife-levels of apparent marital bliss, in later years the wives of some of the original Mercury astronauts have revealed just what a collection of terrible bastards they were.
Flying the Phantom, British-style here 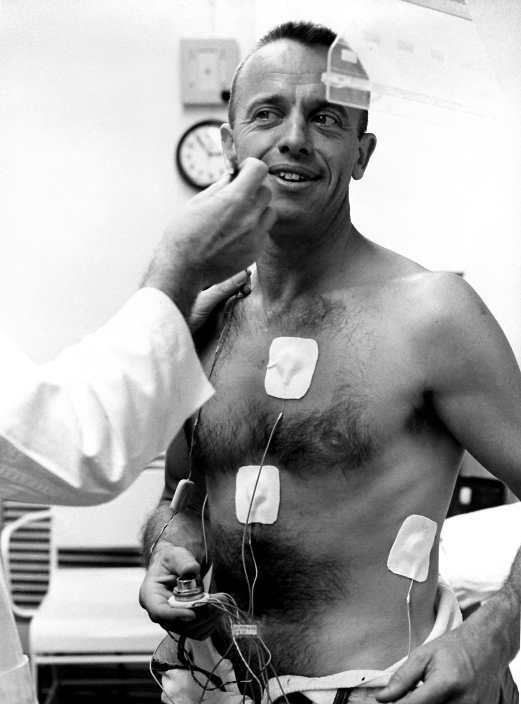 “When you done putting them Nicorettes on, I’d like a happy ending.”

Alan Shepard, the first American in space, attended swingers parties and picked up a Mexican prostitute on a NASA trip to California just before the mission. Glenn had to persuade the press not to print pictures of this impressive indiscretion. Virgil ‘Gus’ Grissom, the second American in space had, according to his wife, ‘other girlfriends’. Gordon Cooper, the sixth American in space, had been dumped by his wife Trudy just before he was selected for astronaut training because he ‘was screwing another man’s wife‘. Realising that NASA required, for publicity’s sake, an apparently perfect marriage, he managed to persuade her to reunite with him for a few years.
They may have had the ‘right stuff’ for spaceflight but it seems they were the stuff of nightmares for NASA’s public relations department. 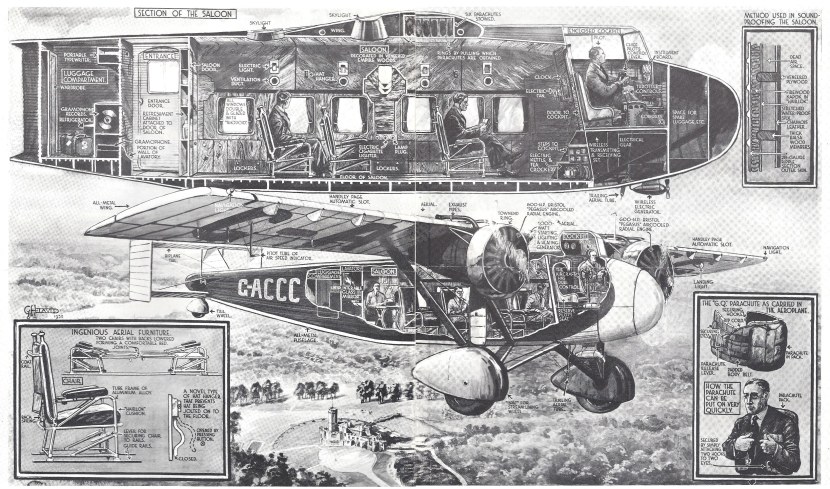 “Cutaway as much as you like, you will never see into my private thoughts.”

“You dress like a cad. You act like a cad. You are a cad!”
So said George V to his dreadful son Edward Albert Christian George Andrew Patrick David Windsor, Prince of Wales, which showed considerable prescience given that this was well before the appearance of such famously uber-caddish behaviour as Nazi-sympathising, American-divorcee-wedding, and outright racism. In his youth, Edward defines the very essence of the Royal cad – he was notorious throughout the 1920s as a womaniser, most spectacularly after one of his conquests, Freda Ward, shot her husband dead. He was (unsurprisingly) cleared of involvement in the subsequent murder trial.  Before abdicating the throne Edward VIII was the first member of the British royal family to learn to fly (with the RAF) though, as heir to the throne, he was never permitted to fly solo, which seems a trifle odd seeing how much his father despised him. Later he would own several aircraft which served as a forerunner to the ‘Kings Flight’ which continues to this day, allowing more modern cads such as Prince Andrew, to potter about at great public expense and do whatever it is that they do, wherever they wish to do it. Edward’s most appropriately caddish aircraft was the Vickers Viastra X, a triple-finned and spatted factory-modified 12-seat airliner fit for a King. 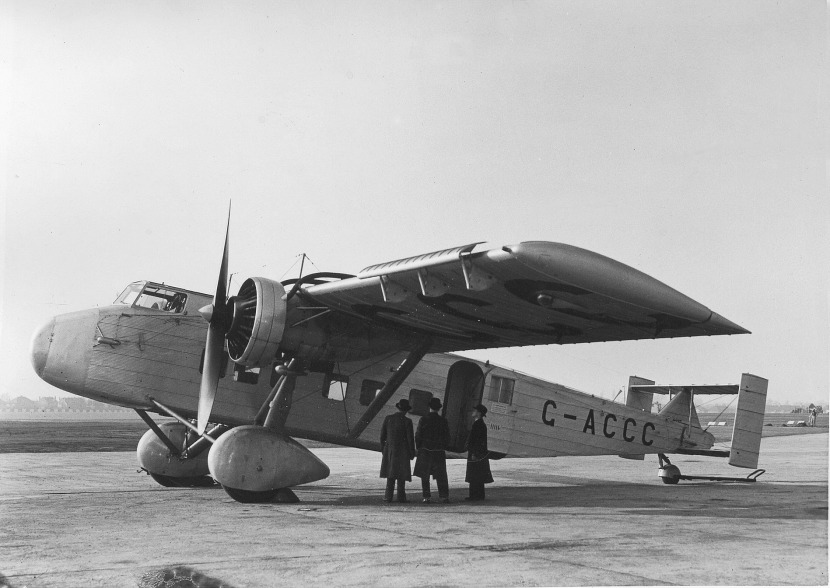 In true louche fashion he didn’t use it very much and it made but one public appearance at the RAF display in 1934. As befits the poshest of cads Edward employed a professional pilot, with the unlikely name of Edward ‘Mouse’ Fielden, to fly his ‘Royal Barge’ around, presumably so he could ‘entertain’ in the passenger compartment. There was certainly plenty of room to do so and the aircraft interior was sumptuously decorated in red and gold by the Scottish painter and designer Anna Zinkeisen.
By Sir Henry Bawling-Vasdeferens

Have a look at 10 Best fighters of World War II , top WVR and BVR fighters of today, an interview with a Super Hornet pilot and a Pacifist’s Guide to Warplanes. Was the Spitfire overrated? Want something more bizarre? The Top Ten fictional aircraft is a fascinating read, as is The Strange Story and The Planet Satellite. The Fashion Versus Aircraft Camo is also a real cracker. Those interested in the Cold Way should read A pilot’s guide to flying and fighting in the Lightning. Those feeling less belligerent may enjoy A pilot’s farewell to the Airbus A340. Looking for something more humourous? Have a look at this F-35 satire and ‘Werner Herzog’s Guide to pusher bi-planes. In the mood for something more offensive? Try the NSFW 10 best looking American airplanes, or the same but for Canadians.